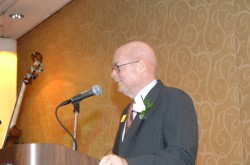 We were especially touched by the death of Randy Vaughan.  He was in our very first SynAudCon seminar in DC in 1973 – and many more after.  We never lost contact with Randy in our 22 years of teaching seminars. It was Randy that brought about our asking Pat to help us conduct a class at the farm.  Randy had agreed to assist Don teach a seminar at the farm, May 1993, starting Thursday.  Randy called on Tuesday afternoon to say that he had a doctor report that showed the sore on his foot was cancer.  He said that he would live, but it sufficiently shook him up that he felt that it was not wise for him to take part in the seminar.

That is when Don thought of Pat.  Pat lived only an hour away.  Don had worked with Pat on a job for John Royer in Indianapolis and Pat was one of the early owners of a TEF machine. On Wednesday a.m. Don called and asked Pat if he could be his assistant in teaching the class. I can’t remember now but Pat probably came up right up to get a briefing before the class.  The class loved Pat, and so did we.  It had been our custom to ask a different outstanding individual in the audio industry to assist Don in teaching the farm classes.  After that class, Pat assisted in every class.

Randy changed the course of history for Pat & Brenda Brown, SynAudCon, and for the audio industry.

Like so many people, Randy had a very special place in our hearts.  He was a very kind man.  When I think of Randy, the words “Mover and Shaker” come to mind.  He had great ideas and he did something about them.  He got things done.  He loved and truly cared about our industry.

In the early 90’s, Randy was occasionally an assistant instructor to Don Davis. Randy became sick at the last moment and had to cancel. Don & Carolyn were desperate for an assistant instructor. Since Pat and I lived an hour south of Don & Carolyn, Don called Pat. That was the beginning of today’s SynAudCon.  We often joked with Randy about this, thanking him for the career change.  We know there was a much higher power orchestrating this.

We are very happy to see a scholarship set up in honor of Randy Vaughan. He gave so much and this fund will allow his legacy to continue.  Please contact NSCA if you would like to donate to this scholarship fund.

Our deepest sympathy to his wife and family.  Mary, he often spoke about you and you were his sweetheart.

Randy, you will be missed.