Pat shared a quick way to get a room measurement using a balloon pop. 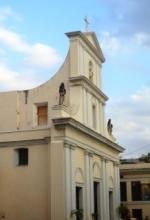 We conducted SynAudCon training in Puerto Rico in December 2010. San Juan is the oldest city in the US, and contains some very old churches that are acoustically interesting and open to the public. There is always a chance that there will be an opportunity to make some room measurements, so I took along the extra gear required to do so. This included a powered loudspeaker with integral media player, WAV recorder and microphone.

The Cathedral of San Juan Bautista

Bob Puff, our IT expert, was with us on the trip. We set off on a quest for IRs of San Juan’s most famous church – the Cathedral of San Juan Bautista. Brenda wisely elected to stay at the hotel and enjoy a good book and an ocean view. We had made no prior arrangements for a measurement session, so we were unsure if it would even be possible. We were “loaded for bear” and felt prepared for getting some meaningful data if the opportunity presented itself.

The cathedral is in a crowded part of the city, with very narrow one-way streets. There was no parking in sight, and the powered loudspeaker, while on wheels, is not easy to drag down the cobble-stoned streets. We grabbed a spot in a post office loading zone, hoping to not find out what the inside of a San Juan jail looks like. The clock was ticking – a reality in many real-world measurement scenarios.

The cathedral was empty of visitors. A lone caretaker strolled the main floor, appearing and disappearing from side rooms and from behind columns. She was friendly, but not English-speaking. We were friendly, but not Spanish-speaking. See the problem? The idea of a full-blown measurement session, which involves playing a 14 second log-sine sweep into the space from the alter area, was seeming increasingly unlikely. 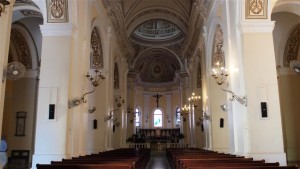 I keep a bag of balloons in the measurement kit for just such occasions. A balloon pop can come and go before anyone is the wiser, and one can always ask for forgiveness after the fact. The downside was that the room was fairly noisy with some fans running to circulate the cool morning air. We decided to scrap the log sweep and go for the balloon pop.

I setup the camera tripod, which doubles as a mic stand. This raised no eyebrows as the space is often photographed by tourists. I used a Tetramic and 4-channel recording rig. The 4-channel impulse response can be decoded later to B-Format, which can be further decoded into the desired mic pattern. Since we would get just one take, I backed off the input sensitivity of the recorder to avoid clipping. An advantage of 24-bit recordings is that you can waste some dynamic range and still have a usable result. Better to allow excess headroom than to clip the recorder.

I inflated a balloon and headed to the front of the church. The tripod/mic was placed in the center aisle, about 3/4 of the aisle length from the front. The objective was to record the room tail, and a compromise had to be struck between direct and reverberant sound levels. The double-wide open doors at the rear of the church were something to be avoided, since they exhibit infinite absorption (no sound returns) and were a source of street noise.

I hit “record,” walked to the front, and popped the balloon. Bob distracted the caretaker, who never raised an eyebrow at the burst. She was probably used to the sound of falling kneelers in the ancient Catholic church. Mission accomplished.

I decoded the multi-channel recording to single channel/omni for evaluation purposes (links below). XY Stereo and B-Format versions can be downloaded from the SAC IR Exchange (Project #44). The versatility of B-Format, when analyzed by ReflPhinder is justification for the extra size and weight of the multichannel rig vs. a hand-held stereo recorder.

Here is the balloon pop recording. It is long enough to capture the full room decay and a few seconds of the room’s noise floor. Listen to it to get a feel for what the room sounds like.

Here is a version that is truncated to remove the room noise at the end. It is suitable for determining acoustic measures. Use GratisVolver or ReflPhinder to convolve it with anechoic speech or music. Click to play, or right-click to Save.

Below is the T30 as determined by ReflPhinder, without noise compensation. Click to play, or right-click to Save. 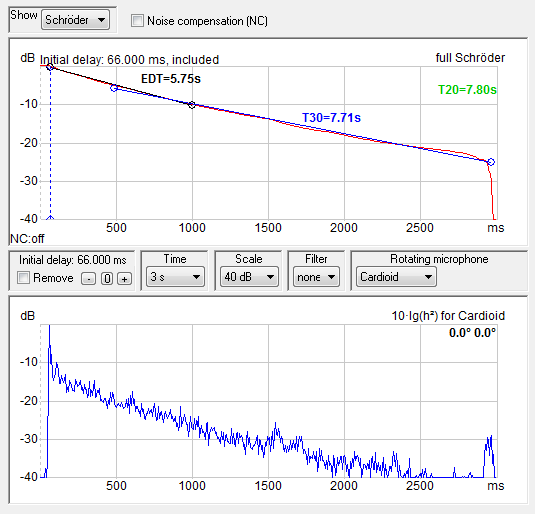 Below is the T30 with noise compensation. A good noise reduction algorithm can salvage a mediocre impulse response, and mediocre is all that can be expected from a balloon pop made in the daylight hours. 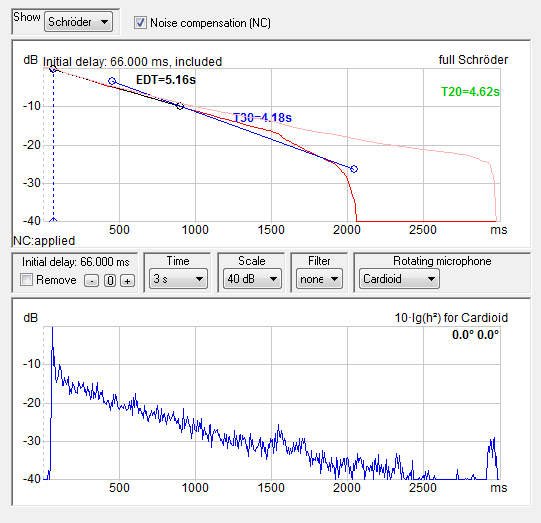 Our impromptu measurement session yielded some useful room data. While we would have preferred the vastly improved signal-to-noise ratio afforded by a sweep recording, sometimes you take what you can get. The balloon pop has very low directivity, which is a good thing for determining the reverb time. It also has limited bandwidth, falling off quickly above 2 kHz. The use of the medium-Q loudspeaker would have produced better data for more octave bands, data that is more relevant to the performance of a sound system.   pb