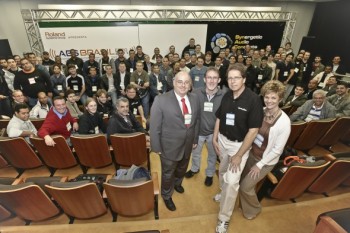 In May of 2011, SynAudCon had an opportunity to teach a 3-day course called “Solving Classic Sound Reinforcement Problems with Modern Tools” at AES Brazil. The convention was held in Sao Paulo. A special thank you goes to Joel Brito, AES President in 2010,  for making this possible. He and his team made this trip very enjoyable for us.

As we arrived in Brazil, we were at baggage claim retrieving our luggage. Pat’s main case with the seminar equipment was not at the luggage pickup, but a “same model” Pelican case was – Oh, no! Dave Distler was waiting for us outside the airport in the pickup area. He noticed a pelican case with the address “Rufing Rd, Greenville Indiana”. He then noticed the name Pat Brown on the side of the case. The gentleman pulling the case was NOT Pat Brown. Dave questioned the gentleman, who then realized he had picked up the wrong case. A BIG THANK YOU to Dave for saving the seminar and saving us thousands of dollars that would be needed to replace the equipment had we not been able to get our case back.

The seminar was standing room only with over 100 people attending each day. The attendees were motivated learners which made teaching fun and enjoyable.  Pat summarized the seminar in this YouTube video.

The exhibition show floor with extremely busy. The show was considered a success with a record breaking attendance of 6500. AES Brazil brings a unique feature that is not frequently seen at a trade show. They have an outdoor line array shootout. On 20 minute intervals, the music rotates between the arrays.  They also have a digital audio mixer demonstration. 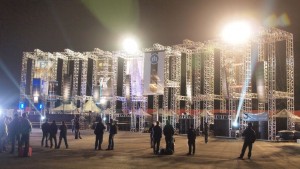 The Line Array "Shoot Out"

We could not leave Brazil without spending a couple of days in Rio de Janeiro.  This city is most known for its beautiful beaches and the Christ Statue.  To us, it is known as the home of two dear friends, Joel Brito and Swen Mueller.  We were very fortunate to spend some time with them.  Joel Brito has attended many SynAudCon seminars over the years.  Swen is the author of the Monkey Forest measurement program that Pat uses to produce EASE and CLF data for loudspeakers. 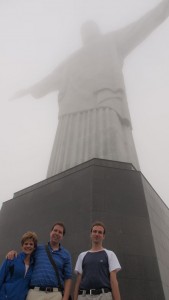 We were very fortunate to see Fiddler on the Roof at the local theatre. What a beautiful example of a well designed performance space. Even though the play was in Portuguese, we were familiar enough with it to follow along.  It was such a pleasure to sit back and enjoyed a great play in a beautifully designed acoustical environment with a well designed sound system. Kudos to all that were involved with this design.

Our sight-seeing day started with a bright, sunny morning. We walked the four miles to Sugarloaf (and back) to get a good look at the area and ride the cable car. We met with Swen to visit the Christ Statue, but as luck would have it a cloud moved through while we were up there. Swen is an avid cyclist and often rides his bike to the top. We did a jeep tour the next day and drank from some coconuts on Copacabana beach.  bb