Loudspeaker Grille Percentage Perforation – Steve Liddle takes four loudspeaker grilles and measures the effect of the frequency response on each of them.

The Heard strikes again! A recent thread on the SynAudCon Email Discussion Group prompted an informal study to quantify the effect of the percentage opening on the performance of loudspeaker grilles. Steve Liddle began the discussion with the following post.

I’m working on a project where the architect wishes to hide our paging horns behind the facade of a building. The construction is a thin metal sheet with perforations in the order of 27%. I believe that will definitely have a detrimental affect the output of horns and therefore on intelligibility and considering the fact that they form part of a life safety system I am reluctant to compromise. I suggested creating custom plates to go where we have our loudspeakers but the A is unwilling to change their design. What would be the lowest acceptable percentage perforation or open area that would not affect the frequency response? Are there any manufacturers reading this who could give me a clue as to their grille open areas? Pat Brown

SynAudCon Members can read the entire thread here. It contains references and links to other resources regarding loudspeaker grilles.

I decided that some objective measurements were in order to supplement the hypotheses. Some 12-inch square grille samples were ordered in. The opening percentages are shown in Figure 1 (click to enlarge). 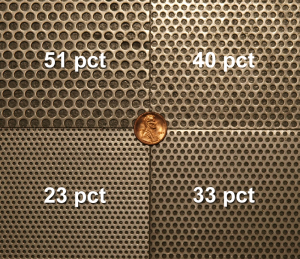 The reference loudspeaker was an 8-inch coaxial studio monitor. The microphone was an Earthworks M50 and the measurement distance was 1 meter. Both devices have extended frequency response (> 20 kHz).  The reference loudspeaker was measured, and then each grille was placed against it and the measurement repeated. I used Monkey Forest to divide each file by the reference to determine the difference caused by the grille. This in effect eliminates the response of both the microphone and loudspeaker by showing only the difference caused by the grille.

This was done on-axis, and then repeated at 20 and 40 degrees off-axis.

I produced some WAV files that can be used with GratisVolver to compare the grilles by listening (on-axis only).

The results for each incident angle are presented in these plots. Please click to enlarge. 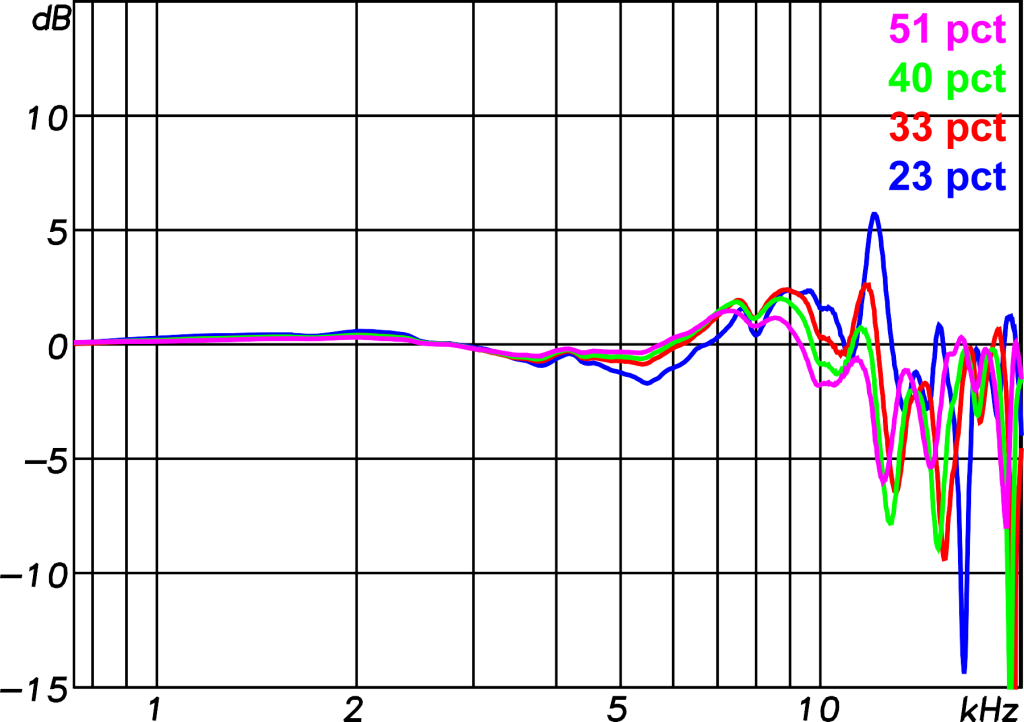 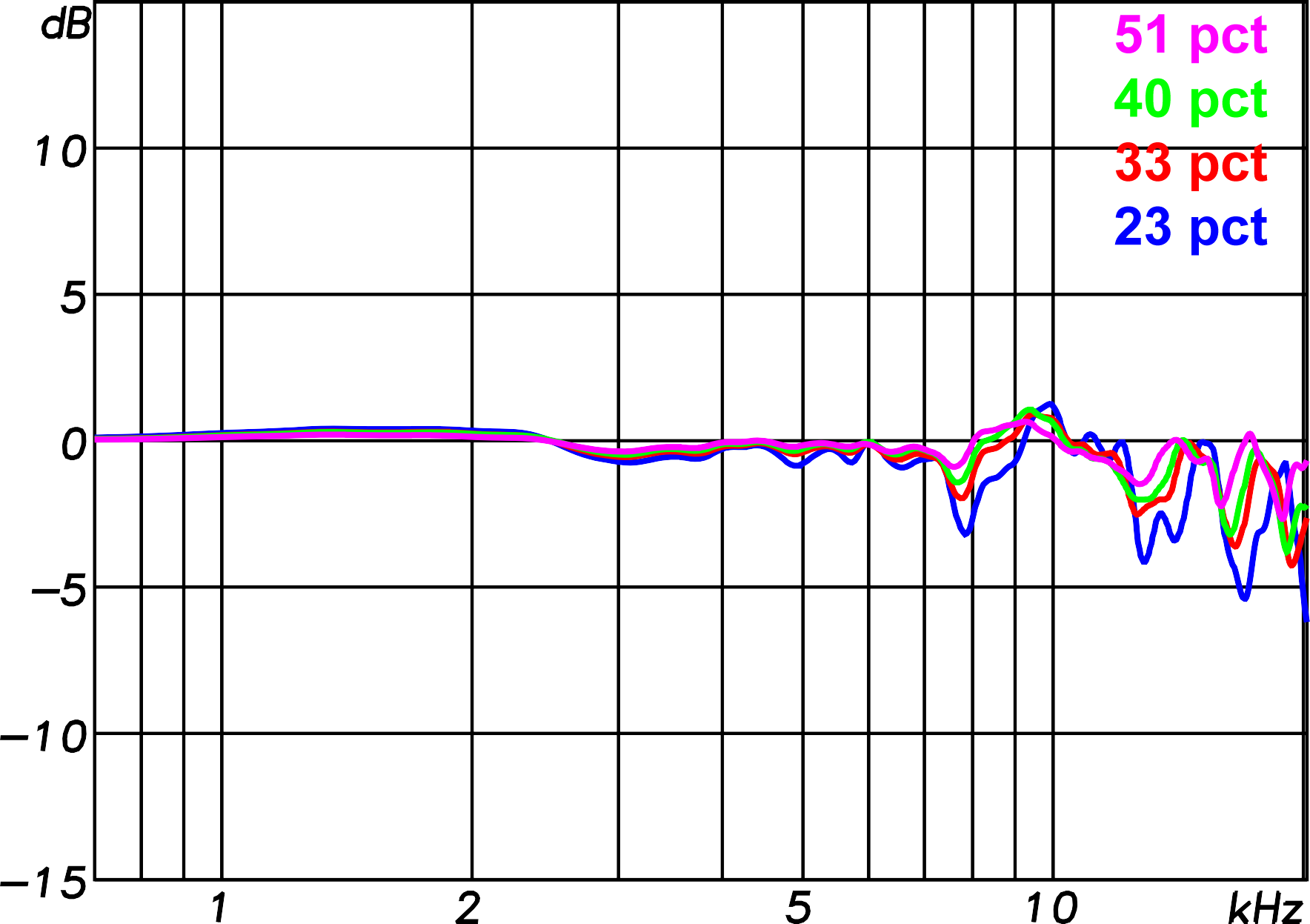 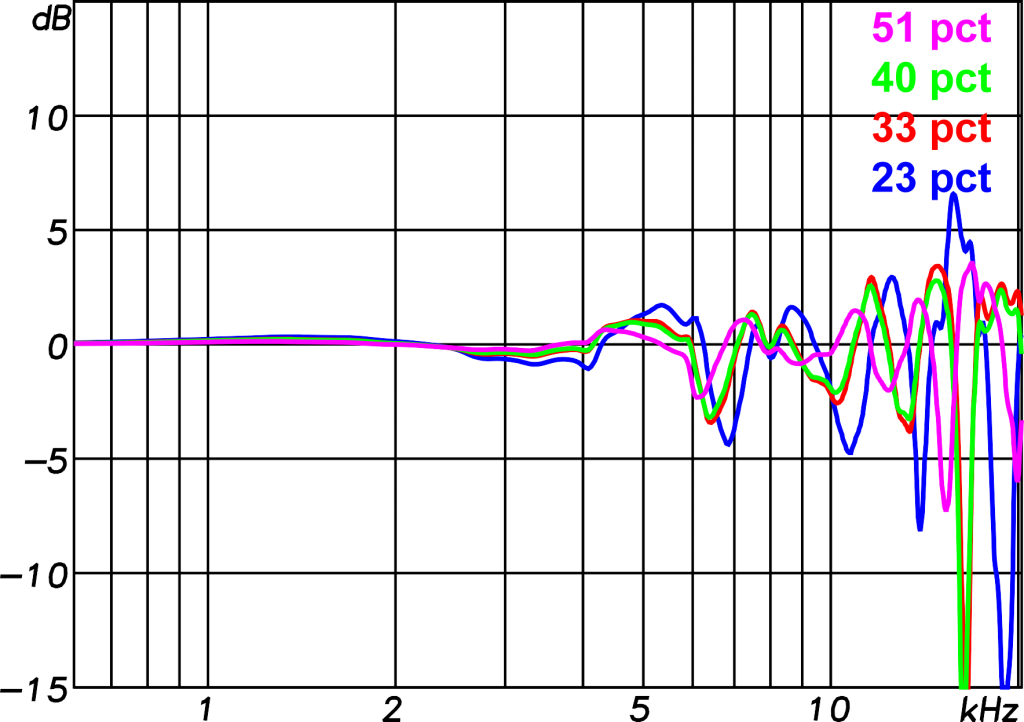 The most interesting result to me was that 0 degrees incidence showed more interference than 20 degrees incidence. My guess is that this can be attributed to a flutter reflection and possible standing wave between the two parallel surfaces (the grille and the loudspeaker baffle). It is also interesting that the frequency range of the interference (2 kHz – 20 kHz) was not dependent on the opening percentage. It can definitely be said that they are different, but it would be difficult if not impossible to identify the opening percentage by listening only.

The Heard provided some other interesting scenarios to be measured. In the future I will provide some polars for the coaxial reference loudspeaker scenarios as well as for a beam-steered line array. An additional study will compare various amounts of air space between the grille and the loudspeaker baffle.

You can draw your own conclusions, but here are a few of mine. The differences between the 4 grille samples are subtle, to say the least. They are much more measurable than audible. Since there are significant measurable differences between the 0 degree, 20 degree and 40 degree angles, I suspect that the polars will be significantly affected. I’ll measure those and post the results after InfoComm. I would also expect the effect to be more severe if the air space is increased, as the increased distance would push the artifacts to a lower frequency.

I would have been much happier if the differences were day vs. night instead of early dusk vs. late dusk, but that’s audio.    pb