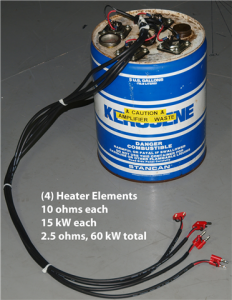 Pat Brown shares how he built a dummy load used for testing amplifiers.

I took on a project this summer that involved measuring the output power of the largest available audio amplifiers. What does one do with thousands of watts of electrical power if they don’t want to make sound? I had previously built a large dummy load using water heater elements in an oil bath for amplifier testing. As is always the case, after it was completed I wished I had done a few things differently. I decided to retire the original and start from scratch on a new version – the Mother-Load. The core of the new version is pretty simple and similar to the original unit, shown at left.

Dummy load resistors are commercially available, but they are very expensive at the power rating needed for this project. Water heater elements are cheap, readily available, and are essentially resistors.

An 1800 W heater element designed for a 120 V circuit should have the ideal impedance for this application (8 ohms). From the power equation:

Four would be required. This would allow testing down to 4 ohms for two-channel amplifiers and 2 ohms for a single channel.

I took my ohmmeter to Home Depot to verify the resistance before purchasing. This produced a degree of confusion on the plumbing aisle, and likely some comments after I made my exit.

The loads would driven very hard for very long, which makes them get very hot. The elements needed a fluid bath to sink the heat. Water is cheap and plentiful, but it evaporates and would cause rust in a steel tank. Motor oil can withstand high temperatures, but it burns if it gets hot enough, as evidenced by the smoke that is produced by my lawn mower each weekend. Mineral oil is non-flammable and eco-friendly, but much more expensive than the other choices. Looking at the big picture, I decided on the mineral oil. I only want to do this once. The typical pharmacy size is 16 oz., and I would need 20 gallons. The Internet can be our friend. 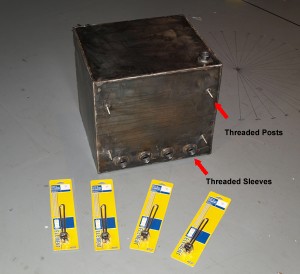 My previous tank was a metal kerosene can. Most are plastic these days – not ideal when there is heat involved. I also learned from Version 1 that if you mount the elements in the lid – because it is flat and you can get a good seal –  the heat does not circulate to the bottom of the tank without a pump. I decided that I needed a tank in which the elements could be mounted near the bottom. It would require flat side walls for the threaded heater sleeves, which rules out using a can. After pouring through websites and the local Harbor Freight, I conceded and had it built at the local machine shop. Those guys work way too cheap. They offered to do it in stainless at 3x the cost, which in retrospect would have been pretty cool. But, I opted for steel to save a few bucks. They provided threaded sleeves for the heater elements, welded right into the side wall of the 25-gallon tank.

That would pretty much emulate my original dummy load, with a few improvements.

from an amplifier (and some impressive power ratings), but it’s not the real world. The impedance of a loudspeaker is reactive. Its impedance changes with frequency and is only a pure resistance at a few points over the loudspeakers bandwidth. The Rane Professional Audio Reference details a circuit for emulating the impedance of a real-world woofer. I decided to include one for each of my four heater elements, along with a switch to toggle the circuit on and off. That’s where things started getting expensive.

The values required for the inductors and capacitors were very large due to the low frequency requirements. They also had to have a current capacity and peak voltage rating that can handle any available audio amplifier. Modern switch-mode amplifiers have 200 V rails and, due to their high efficiency can source currents that approach what is available from the electrical circuit, which is limited only by the breaker rating. The inductors were beefy indeed, and I had to build a series-parallel bank of electrolytic capacitors to emulate the single, non-polarized capacitor called for by the circuit. The DPDT switches also have to handle the high current. Because the tank is steel, the components would have to be mounted on an external board that could potentially get pretty hot. I found an old amplifier in the bone yard and used the top cover, receiving gratification that a purpose was found for something I had threatened to discard on several occasions. The machine shop tacked some threaded mounting screws onto the side of the tank to suspend the circuit board in air, which would aid in keeping it cool.

I added a thermometer to monitor the oil temperature, which is perhaps the best indicator of how much power is being delivered to the load by the amplifier-under-test. A wheel board made it mobile, but it has already settled into its new home under a workstation.

Figure 2 shows the impedance of the Mother-Load with the reactive circuit engaged and bypassed (two 8 ohm sections in parallel).

The whole point of a dummy load is to sink power from the amplifier without producing sound. Otherwise, I would just use a subwoofer array as a load. It’s interesting that the Mother-Load produces enough sound to easily identify the program material, presumably from the vibration of the choke’s windings.

In closing, if you have the need for such a device, the machine shop is willing to make more tanks. Drop me an email if you need the details.  pb 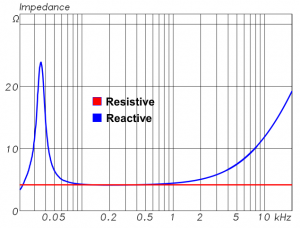 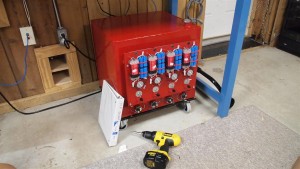