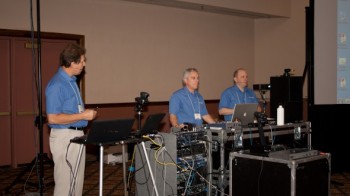 The 3-day SynAudCon Digital Seminar is divided evenly between basic digital theory and Ethernet-based audio networks. Brenda arranges a site visit of a large networked system in the area for each class. This year we had the pleasure of touring the Indianapolis Convention Center. This is a newly renovated system that utilizes CobraNet to provide sound reinforcement, intercom and paging to the facility. It is also linked to the newly constructed Lucas Oil Stadium, which will be host to the 2012 Super Bowl. 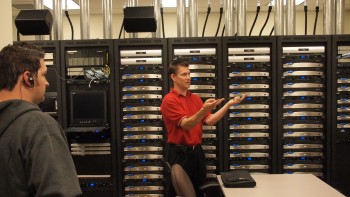 Mike Cast did a excellent job leading the tour.

The tour was made possible by a number of individuals. Bob Potter is in charge of audio at the convention center. Fairchild Communications was the installing contractor, and Biamp Systems, Inc. and Crown International were the main vendors for the gear. Mike Cast of Fairchild was our tour guide. Jeff Philips of Biamp was present to take questions on the signal processing. Brad Benn, who is one of the course instructors, was also involved in the installation of the system. Between Mike, Jeff and Brad, anyone who asked a technical question got an immediate answer. The 2-hour walking tour included an equipment room, the convention center main floor, and an intercom room. The tour was greatly enhanced by the use of a 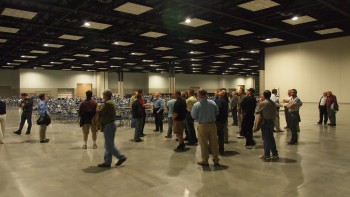 portable FM listening system provided by Listen Technologies. This made it possible for the entire group to hear Mike at all times, even when only a small group could fit into a control room where he was speaking. I was quite impressed by the clarity and ease-of-use of this system.

On day three of the seminar Steve Macatee and Brad Benn presented the fundamentals of Ethernet-based audio networks to the group back at the hotel. Their presentations came alive since the group had been 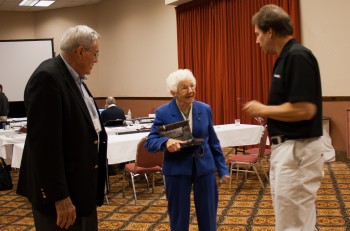 introduced to the terminology during the tour the night before. It was one of those magical times where everything fell into line for a great synergetic experience.

We were honored to have some special guests for the seminar. Don and Carolyn Davis came up from their Farm in southern Indiana. John Royer of the Indiana State Fairgrounds and Indy Motor Speedway was with us for all three days and even provided some excellent donuts one morning.

This group of attendees made full use of the synergy opportunities. Nightly, groups of individuals shared a meal to learn from each other. It was fun, educational and beneficial three days.