Pat Brown presents some principles that apply to virtually all commercial power amplifiers.

The photo shows the back panel of a 2-channel power amplifier designed for sound reinforcement use. I use it as an example in our Sound Reinforcement for Technicians in-person seminar. 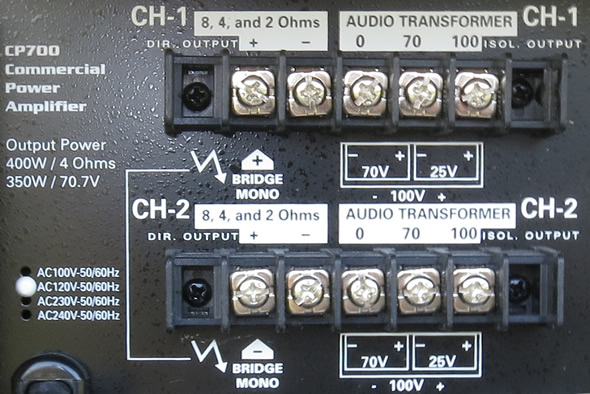 The “screw matrix” provides many ways to connect the loudspeaker load(s) to the amplifier. Such versatility can be daunting to those new to audio. In fact, I heard one guy mutter “Holy mackerel!” during the recent Atlanta seminar when we got to this page. But, if you can understand this amplifier, you can understand any amplifier. Here’s a run down on the interface options.

First, this is a two-channel amplifier. Channel 2 is a carbon copy of channel 1. The channels can be used individually, as two separate amplifiers, or they can be used together into a single load. Let’s start with considering channel 1 (top row of screw terminals) by itself.

The major choice is “Direct” or “Isolated.” Direct output means that the amplifier’s output stage is direct-coupled to the terminals of a loudspeaker system at “voice coil” impedance. The impedance of a loudspeaker voice coil is pretty low (< 16 ohms). The circuit is shown in Figure 1. Note that this configuration requires the least possible resistance in the circuit to allow maximum voltage transfer to the loudspeaker and maximum current flow. The wire gauge must be selected to minimize the voltage drop across it. A well-accepted criteria is to limit the wire resistance to less than five percent of the load resistance, which results in < 0.5 dB of line loss. The + and – terminals of the amplifier are labeled “8, 4 and 2 ohms.” But what about 6 ohms? Or 30 ohms? Any impedance higher than 2 ohms is acceptable, so it could just as well have been labeled “2 ohms minimum.”

Direct connection is typically used when the maximum possible amplifier power is needed into a single, passive loudspeaker through a relatively short cable. Portable systems are a good example, as are fixed-install systems that utilize full-range multi-way loudspeakers. Direct connection yields the widest possible bandwidth, with flat response down to 30 Hz for this model.

Here are the pros and cons of direct connection:

Widest bandwidth – Amplifiers operate to a lower frequency when there is no transformer in the output circuit.

Line loss – With a load impedance of 8 ohms or less, wire resistance must be considered and minimized. Expect to need heavy cables.

One or two loudspeakers, max – Power amplifiers run out of current if excessively loaded.

No isolation – A direct current (DC) fault may fry the loudspeaker.

The isolated output gets its name from the internal step-up transformer between the amplifier output stage and the screw terminals. This amplifies the voltage to a (usually) higher amplitude. The voltage is reduced at other end by a step-down transformer in the loudspeaker. 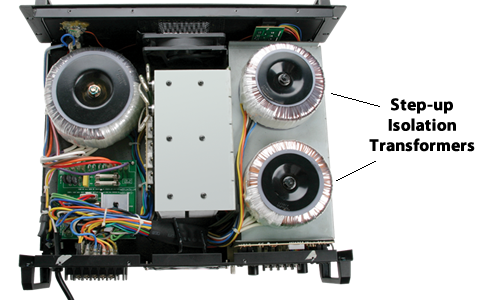 Photo 2 – Isolation is provided by an internal step-up transformer for each channel.

The isolated outputs are labeled using standard sine wave rated distribution voltages (25 V, 70 V, 100 V). In this application, the amplifier is typically “maxed out” regarding voltage. The current draw depends on the load. Each loudspeaker on the line is equipped with a step-down transformer to reduce the line voltage to that needed to produce the desired SPL at the listener.

Figure 2 – Diagram of isolated output connected to loudspeaker through a step-down transformer (usually integral to the loudspeaker).

So, the level is adjusted at the loudspeaker, not at the amplifier. The actual voltage at the amplifier’s terminals for audio signals (as opposed to the sine wave used to rate the system) is about 1/3 the rated sine wave voltage for pink noise, and possibly less for music and speech. There are 3 available line voltages: 25 V, 70 V, and 100 V. Ideally, the line voltage should be the same as the rated line voltage of the step-down transformers used in the loudspeakers. For example, a “70 V” loudspeaker will have selectable wattage taps that assume that 70 VRMS is present on the line. If some other voltage is present, as is always the case for other than the rated condition, then the power to the loudspeaker will be different than indicated by the label on the step-down transformer (Photo 3). 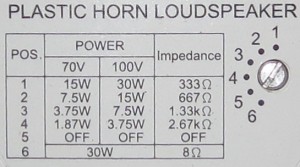 Why three voltage choices? The higher the voltage, the lower the line loss. With the price of copper these days, that can add up. Increasing the voltage also increases the risk of electrical shock, so check your local codes for conduit requirements.

The minimum allowable load impedance that the amplifier can drive is different for each voltage, and must be found by calculation if not specified. The load presented by a zone of loudspeakers can be determined by summing all of the power taps on the line. The appropriate amplifier must have a higher rating than this sum. Power tap summing eliminates the need to measure the load impedance. If it is not practical to sum the power taps, such as in a retrofit where loudspeakers may be spread over a large building or campus, then the loading can be based on impedance data. The minimum load impedance for this amplifier is not specified, but it can be calculated by rearranging the power equation to solve for R.

This yields a 14 ohm minimum acceptable impedance for the 70 V output.

As one might expect, the isolated output has its own set of trade-offs.

Multiple loads – Since the loads are higher impedance due to the integral step-down transformer, many can be daisy-chained onto a single amplifier.

Loudspeaker-specific SPL – Each loudspeaker has its own power tap, which can be adjusted in (usually) 3 dB steps.

Restricted bandwidth – Transformers are filters, and may saturate at low frequencies. You’ll need a subwoofer to get the lowest octave or two.

Reactive load – Transformers are reactive and reflect power back to the amplifier. This may fry a “hi-fi” amp. Commercial amps only, please.

Loudspeakers (typically) require step-down transformers – This reduces the models to pick from, although external transformers or autoformers can be added to any loudspeaker.

The amplifier may also be configured for bridged-mono operation. This allows the summed voltage from both channels to drive a single load, such as a large subwoofer. This works out to 88 VRMS into 8 ohms.

The amplifier may also be configured for isolated bridged-mono operation. This allows the summed, stepped-up voltage from both channels to drive multiple loads at 140 V (28 Ω min) or 200 V( 57 Ω min). This can be necessary with very long cable runs, such as at fairgrounds and along parade routes.

To summarize, use the direct outputs for typical sound reinforcement applications where you need to drive a couple of full-range loudspeakers. Keep the load impedance above 2 ohms, preferably 4 ohms or higher. Use the isolated outputs to drive zones of loudspeakers that are spread out over a large area, such as a meeting room. The loudspeakers must incorporate step-down transformers that are rated for the line voltage selected. Use the direct outputs bridged-mono if you have a loudspeaker that can handle very high voltage whose impedance is 8 ohms or higher, such as a full-range, high power-handling loudspeaker with internal passive crossover. Use the isolated outputs bridged if you need a very high drive voltage to multiple loads through very long cables. Race tracks can require miles of cable to serve all of the loudspeakers.

As always, these are principles that apply to virtually all commercial power amplifiers. Be sure to consult the owner’s manual on the specifics for your make and model regarding interconnect and loading.  pb