We can now consider slap echoes, a special problem that can result from the way line arrays are typically use. With a traditional central cluster of direct radiator and horn speakers, sound hitting the rear walls usually strikes the wall at a great enough angle so that it reflects into the rear audience and is absorbed. The exception to this rule is venues having balconies, in which case, the cluster may be almost level with the rear balcony face. Even in this case, though, the slap echoes usually bounce to the front, and unless the angles are such as to allow the repeated reflections to crawl down the rear-front-rear-front walls until they are finally heard by the audience as very late echoes, they may not be a problem. Line arrays, especially single-box ones, are often mounted at or near ear level, so the reflections from the rear wall are also at ear level. By the time these get back to the front, they may well be sufficiently delayed (>50-80 ms) to cause problems.

Figure 1 illustrates this problem with a section view of an 80′-long sanctuary. The cluster is aimed to cover the nave, and any out-of-pattern energy that hits the rear wall will bounce into the congregation and be absorbed. The line array is aimed directly at the rear wall, creating a 140-ms-delayed echo at the location shown. Slightly higher mounting for the line array, combined with a slight down-angle, could target the echo further back in the seating area, where the delay—and hence the objectionability—would be less.

Another solution to this issue in new construction is to slope the rear wall so that reflections are sent back into the rear audience. When combined with moderately elevating the speakers, this can avoid slap echo problems. Another solution for either new construction or renovations is to slope a portion of the rear wall above the audience. This allows a steeper slope to be employed. Figure 2 shows an example of this technique in the new Christian Life Center of Elizabeth Baptist Church in Shelby, NC. 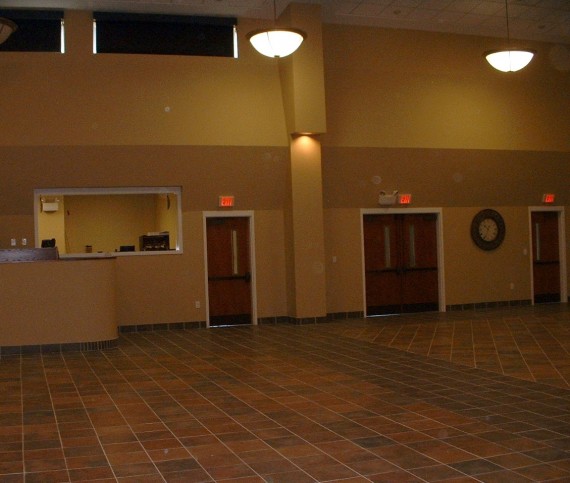 Even with careful architectural design, single-box line arrays require great care in aiming. Aim too high, and you get slap echo that will degrade the sound in the front seats. Aim too low, and you will not cover the rear seats well. Since in real venues, we do not have the option of measuring direct sound only (unless we use a windowed FFT analyzer), probably the best approach is to listen carefully to the high frequencies with a white (not pink) noise source, while sitting in the back row and having an assistant lower the aim of the array. When you hear the highs begin to get a little weak, back off (aim a bit higher), and you have it. This only works if you can hear up to at least 8 kHz or so. If not, you can use an RTA and look at the highest bands. The reason this works is, as shown in a previous blog, line arrays do not settle down to the really narrow vertical coverage until the frequency is pretty high. So you lower the aim until the top of the beam is below ear height at high frequencies, then back up.

Digitally steerable line arrays introduce several additional gotchas to avoid. (Basically, in these devices, steering is accomplished by adding tapered delay to some of the drivers. This concept was treated theoretically by Wolff and Malter of RCA in 1930!) One gotcha is the use of extreme steering. Although modern steerable line arrays may have maximum steering angles up to or even beyond 30 degrees, the sound quality degrades subtly as the steering angle increases. Thus steering angles above 15 degrees should be used with caution.

The other gotchas concern the use of multiple beams. Even though many beams can be used with some steerable line arrays, the side-lobing and sound quality are adversely affected by a proliferation of beams. It’s always best to start a design using a single beam; then, if more beams are necessary, add them one at a time.

And while multiple beams can be a real problem-solver, they also can present a dangerous temptation. In one installation I helped to design, the client (contractor) had pre-sold his customer (church) on using steerable line arrays to cover both the nave and the balcony of a long, narrow stone sanctuary. The wide horizontal coverage of the line arrays put way too much energy into the reverberant field, so even though the direct level in the balcony was almost the same as in the nave, the reverberant field was so high that the sound quality was distant and not really satisfactory. The proper solution for that installation would have been a central cluster, had the presence of a beautiful stained-glass window at the peak of the chancel wall not aesthetically vetoed its use. Given the use of line arrays, the second choice would have been delayed balcony speakers rather than multiple beams. In this case, the distance from the line arrays to the back of the balcony seats exceeded 120′, which is really long for single-box steerable line arrays.

All of which brings us to one description of the difference between engineering and sales: engineering is the science of the possible; sales is too often the convincing of the customer that the impossible is possible. And when the sales manager is convinced that a certain new tool is the solution to all design issues, as has sometimes happened with steerable line arrays, sales may unfortunately triumph over engineering.

I hope this series of blogs on 1-box line arrays has presented information to help sound designers and contractors properly apply these very useful tools to achieve the best possible result.