Cable shields are not bad. In this article Pat Brown warns that making Output-End-Only (OEO) rule as your default is not a good practice. 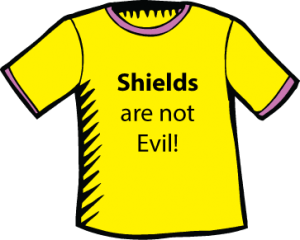 One of the attributes of the balanced audio interface is that unlike an unbalanced interface, the signal current does not flow on the cable shield. Cable shields often form ground loops with other shields, or with power cord safety grounds, or with a chassis grounded through the rack rail. Ground loops can be responsible for the common “hum and buzz” sound that comes out of many sound systems. If you have followed the writings of Neil Muncy, and are up on the AES 48 standard, then you know that the real culprit is the “Pin 1 problem,” written about many times here and elsewhere. Some of the “fixes” commonly used include:

There are others. Some consultants specify the use of the OEO rule for balanced interfaces. This involves connecting cable shields in balanced line level interfaces at the Output-End-Only.

It is important to note that “Shields are not evil.” Say it a few times. Put it on a coffee cup or T-shirt. There are scenarios where the shield connection is important, even in a balanced line level interface. I recently visited a small-town museum that had a noticeable hum from their wireless mic. Upon investigation, I found that the installer had followed the OEO rule when connecting the balanced output of the receiver to the line level input of the mixer. The receiver was sitting on a shelf, and powered by a non-safety-grounded DC power supply. This allowed the chassis to float, and behave as an effective receiver of electromagnetic interference. I diagnosed the problem by bridging a paper clip between the receiver chassis and the mixer chassis. They had tried a number of solutions (including a 60 Hz notch filter) to no avail. Simply connecting the cable shield fixed the problem.