Replacing the PC Power Supply Fans can quiet the PC. Pat give an overview of the process and shows the measurable results.

I recently acquired a rack mount PC for loudspeaker testing in the shop. It’s a dual-boot DOS/WinXP machine that will serve as a backup to an existing, similar system. Out-of-the-box, the noise level of the PC was oppressive. This was made worse by the fact that my shop is in the rural countryside and is very quiet. I briefly considered an isolation rack, but rejected that idea due to the expense and inconvenience. Like cockroaches, noise is best dealt with at the source. Other than the hard drive, the only moving parts in the PC are the fans. I would try replacing them before moving on to more expensive, esoteric solutions.

Here is a photo of the PC showing the positions of the internal fans. The cover was removed to allow the microphone to be equidistant from the 4 fans. The cover is heavily vented, and its removal made no audible difference in the noise level from the PC (Figure 1). 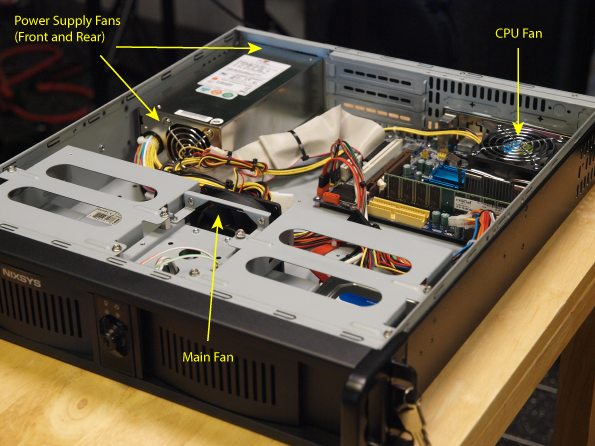 Figure 1 – The locations of the four internal fans.

I measured the SPL of the noise (1 m distance) using an overhead microphone. The A-weighted noise level was LAS* = 49 dB. This is +25 dB compared to the ambient room noise level (LAS = 24 dB), shattering the solitude of my working environment (Figure 2). For what it’s worth, the ambient measurement is very near the noise floor of the NTI XL2 meter.

Having no experience in “quieting” a PC, I posted to the SynAudCon Forum for advice. Some of the folks there have had to do PC noise control for studios, sound booths, etc. I got some great suggestions, all of which included fan replacement. It seems that there is an entire after-market for reducing PC noise (who knew?). After exploring some links, I bought some replacement fans from Quiet PC USA. The sky is the limit on the sophistication (and pricing) for these things. Some of the CPU coolers look like V8 engines. I stayed conservative to keep the cost down.

The fans were replaced incrementally and the change in noise level measured. I stuck my ear to each fan to assess which was the noisiest. It was definitely the CPU fan. Unfortunately the cooling unit I bought was too large given the proximity of the CPU socket to the side wall of the chassis. I ordered a different fan, and moved on to replacing the main 80 mm fan. While it was easily replaced, it made very little difference in the noise level. The reason is logical. If it were the same level as the CPU fan, replacing it would only drop the noise level by 3 dB. The measured drop was less than that, meaning that the noise level was a bit lower than that of the CPU fan. You can’t operate a PC without the CPU fan running, so I would have to wait until the replacement came before I could assess the noise reduction from replacing the main fan. 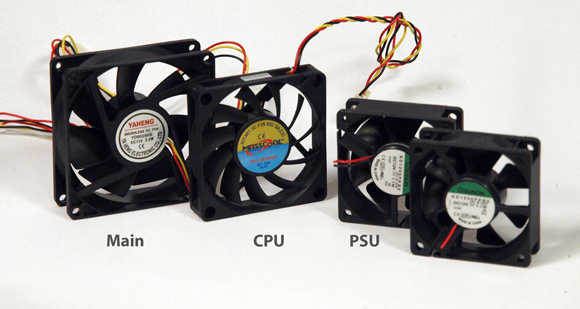 Figure 3 – A family of noisy fans

The power supply unit (PSU) had two fans – front and rear. Replacing them required removal of the PSU from the PC. The small fans were easy to replace, but the wiring was tied into the PC board in a way that was nearly impossible to access. I cheated and cut/spliced the wiring for the new units (goodbye warranty). There was an audible noise level reduction – finally. I checked the air flow with some smoke and reassembled the system.

The new CPU fan arrived the next day. Instead of buying a complete cooling assembly (like the first try) I opted to just replace the 70 mm fan and keep the original heat sink. This only took a few minutes, and the noise level reduction was significant. 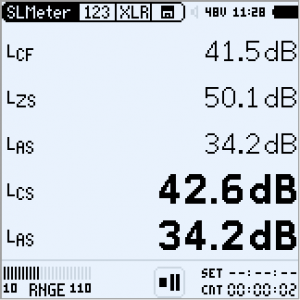 So, I got a 15 dB improvement for about $35 USD and some time. The Forum discussion included some suggestions for reducing the noise further (i.e. reducing the fan speed) but I decided that the current noise level is acceptable and I declared the project completed.   pb 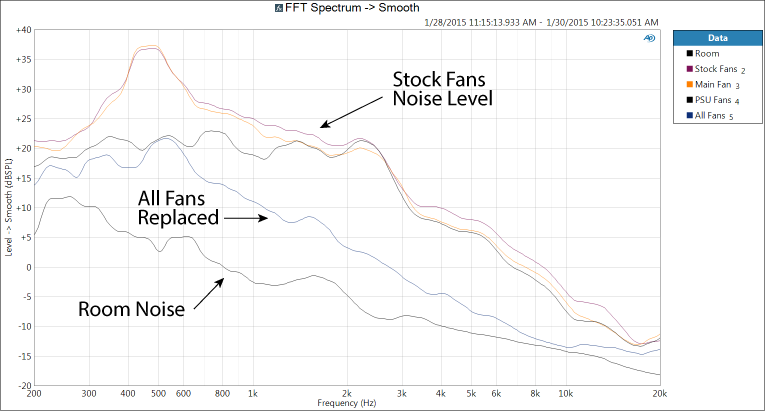