Phase response is often questioned. Many practitioners use the software functions such as: delay finder, auto delay finder or phase compensator to check phase response. However, most do not understand the basic principle behind the function. This article will discuss how to set a correct time reference to view phase response and assumes readers have experience in loudspeaker measurement.

Impulse Response and the Digital World 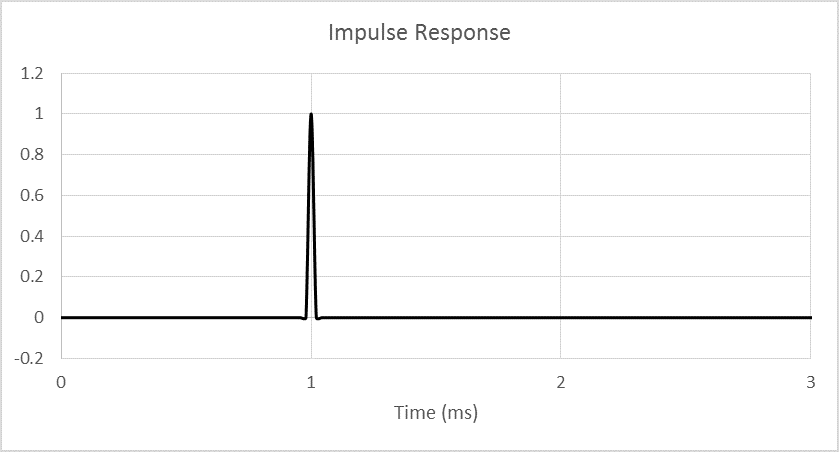 Figure 1 shows a perfect impulse response (Dirac pulse) with the peak at 1ms. This is a time domain graph showing that:

If we zoom in a little bit, we can see in figure 2 that the impulse response starts before 1ms. The question is does this mean the exact arrival is just slightly before 1ms? 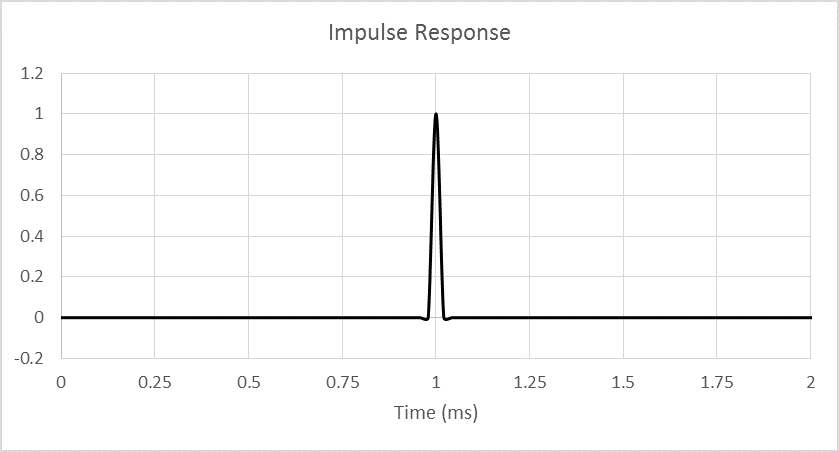 In visualizing a graph, a line is graphed to connect the dots. This helps us to see what is being graphed more easily. Let us see how figure 2 looks like when we only show the X and Y values with a dotted graph. 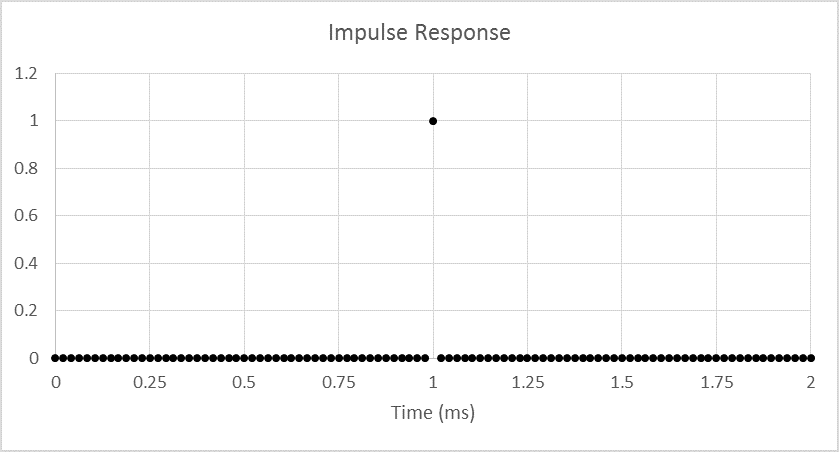 In figure 3, it is clear that the impulse only contains one energy spike that arrives exactly at 1ms. Understanding where an impulse response starts is the first step in reading the phase response. Not all analyzers can show a dotted graph, but it is important that we understand where the line/curve comes from in digital equipment.

Note: in digital, all values are discrete (not continuous) and the resolution of the time plot is determined by the sample rate. A Dirac pulse contains only one sample.

Why do we need to worry about the starting point of the impulse? Let us examine the effect of propagation delay on a phase response.

Propagation delay can result from different things such as:

This is the time required for the direct sound to arrive to the microphone. Sound travels in the air at approx. 344 m/s (@20°C). It is important to know that sound requires time to travel in the air.

Using FIR linear phase filters may result in additional propagation delay. The filter’s processing delay can take as small as 1ms up to >500ms depending on the applications. 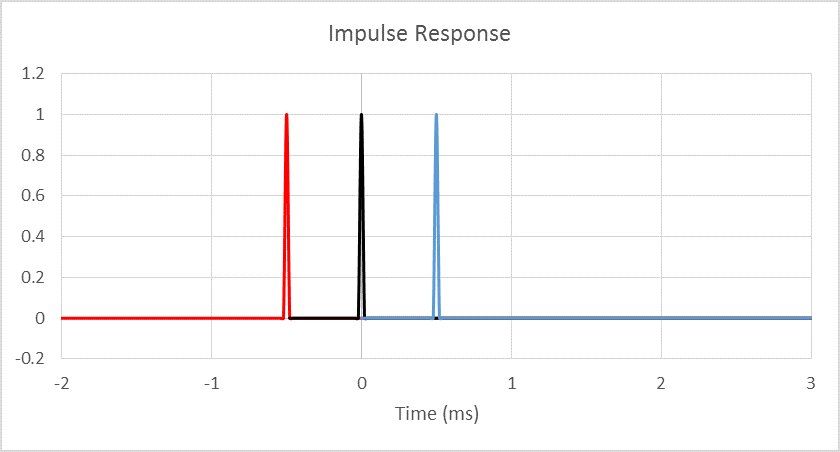 Group delay is the negative rate of change of phase with respect to frequency. The group delay equation can be seen below: 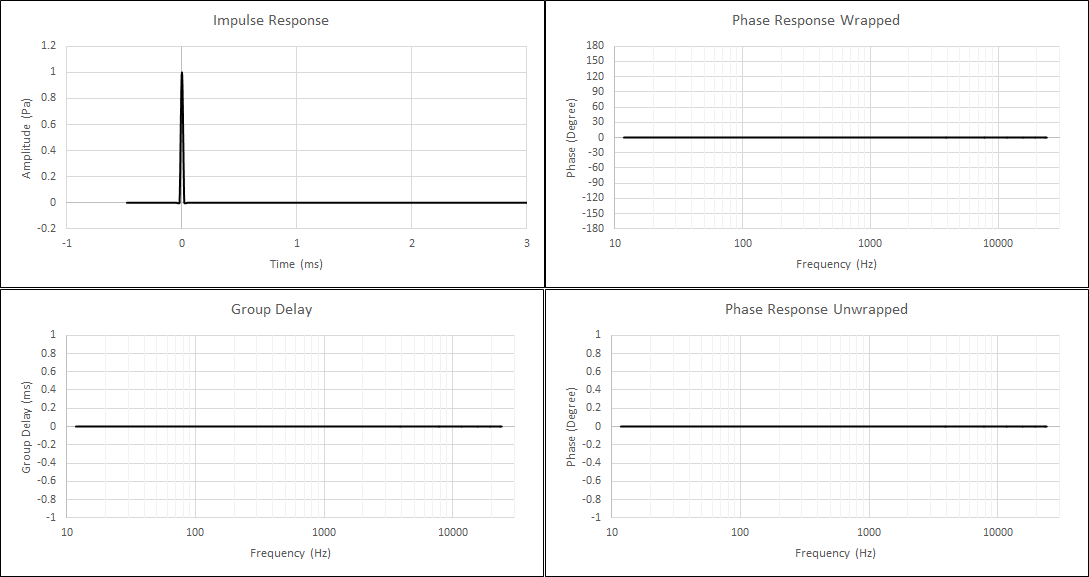 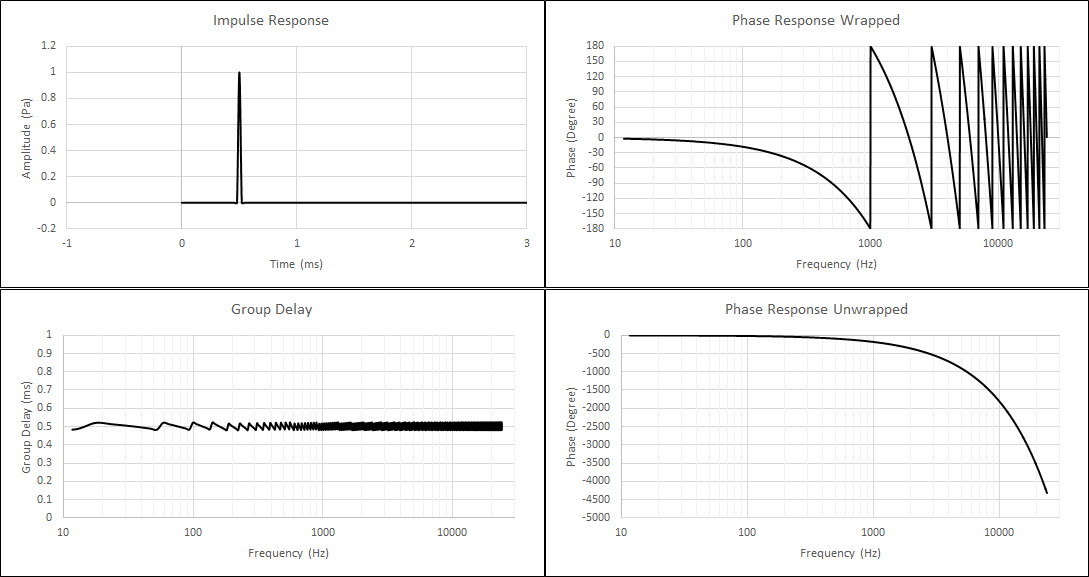 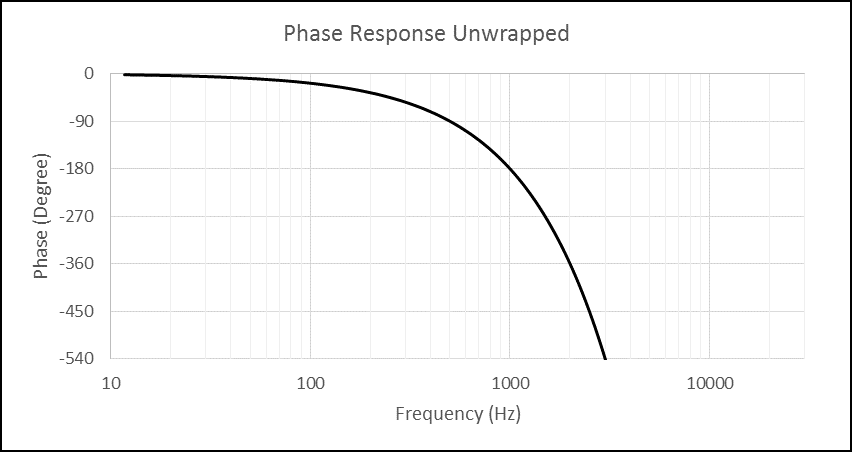 We can calculate that 0.5ms is a period of 2000Hz. The period of a sound wave is the time it takes to complete one cycle (360°). Therefore, we can see that the phase is -360° at 2000Hz. For a frequency of 1000Hz, it requires 1ms to complete a cycle, thus the phase is shown at -180°. In other words, 1000Hz lags by a half cycle and 2000Hz lags by a cycle in the presence of 0.5ms propagation delay. Without removing the propagation delay, all frequency components of the input signal are shifted in time by the same constant amount. This is not a phase distortion.

If we change the X-axis (frequency axis) of figure 7 to a linear scale, we can see a straight line. Please observe figure 8.

Note: The negative value in phase shows a condition where the phase lags at that frequency. 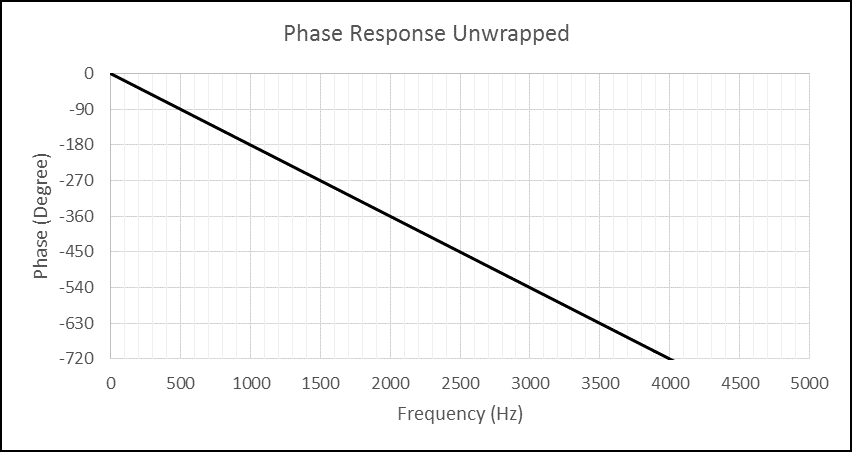 Another observation from figure 6 is the group delay. The group delay curve is at 0.5ms, corresponding to the 0.5ms propagation delay.

It is important to understand that a small amount of propagation delay can drastically affect the phase response curve at high frequencies. 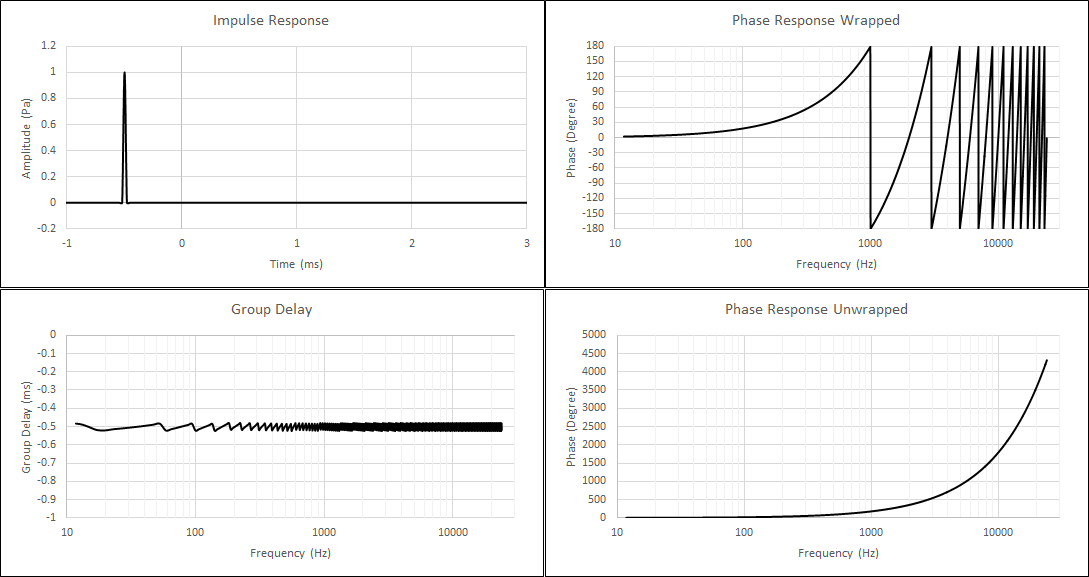 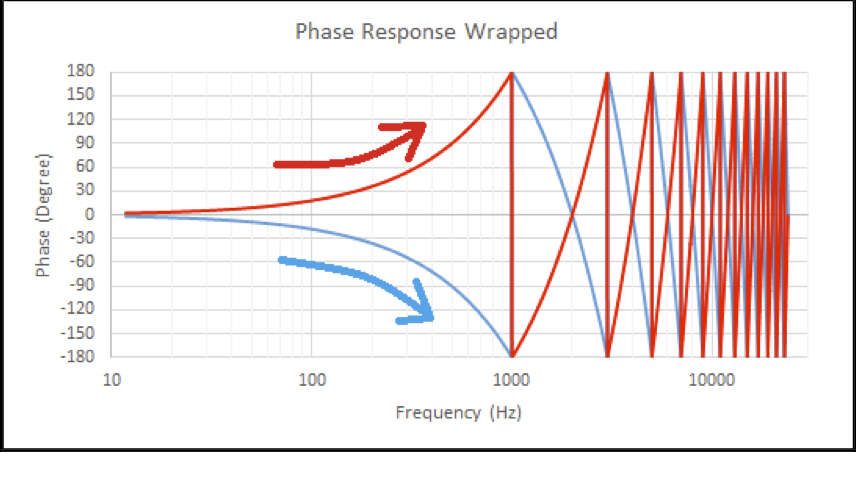 Since propagation delay results in a linear phase shift, this can be easily predicted or calculated. A typical way of removing the propagation delay is cyclic shifting so the peak of the impulse is aligned at 0ms. It is commonly found in measurement software as auto delay finder, auto peak finder, normalize max to zero or others. This can be misleading for phase response reading if the frequency content above 1000Hz is lacking in intensity such as if influenced by a low pass filter. 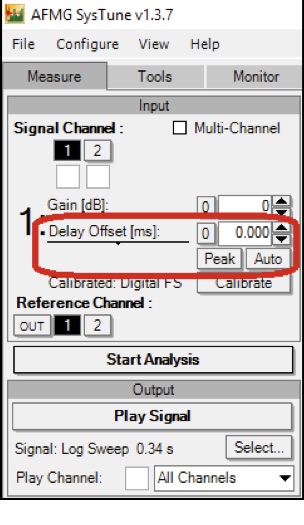 Figure 11 is a screenshot from EASERA where the user can remove the propagation delay manually by typing the delay amount under edit functions under cyclic move sub-menu.

Figure 12 is a screenshot from Systune where the user can remove the propagation delay manually by inputting the delay offset amount or using the peak button to cyclic move the impulse peak to 0ms.

Figure 13 is a screenshot from ARTA where the user can define the starting point of the impulse by placing the yellow cursor, thus removing the propagation delay. 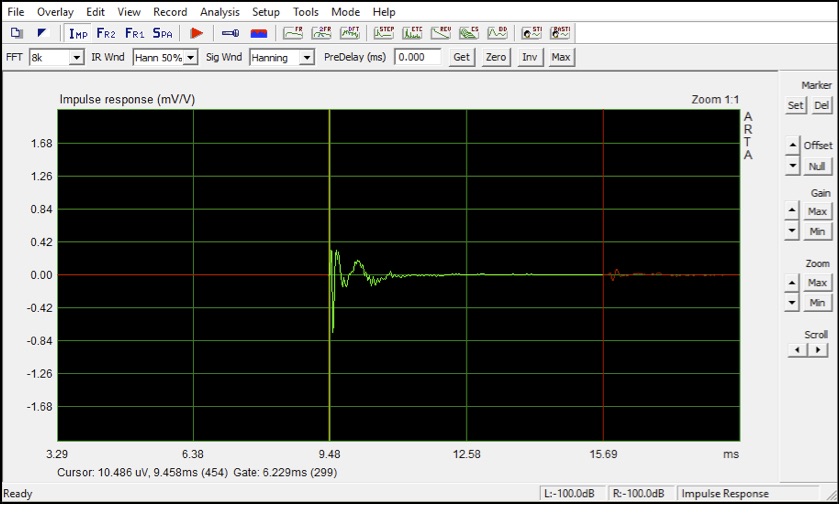 The visual minimum phase relationship between magnitude and phase responses can be seen in figure 14. 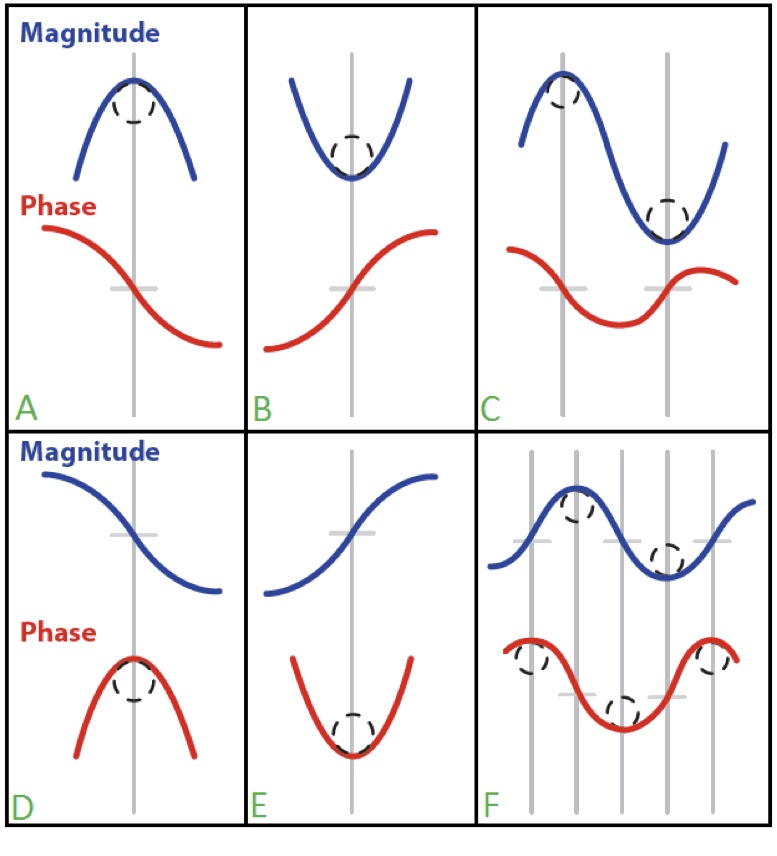 Let us observe a modeled one-way loudspeaker response with IIR filters, a high pass at 60Hz and a low pass at 12500Hz in figure 15 below. 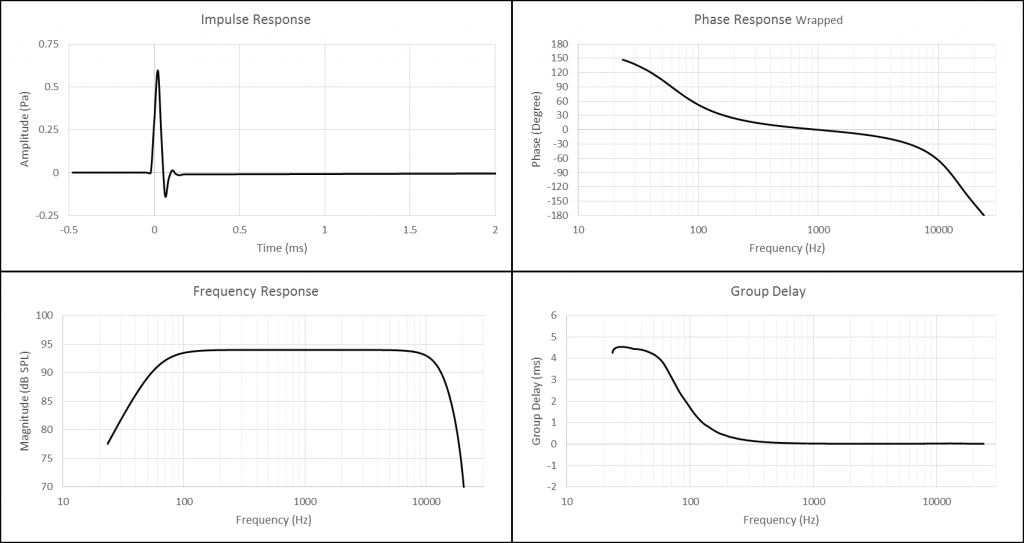 One little observation is the impulse peak that is shifted right a little bit. Let us observe figure 16 where the impulse response graph is changed to a dotted graph. 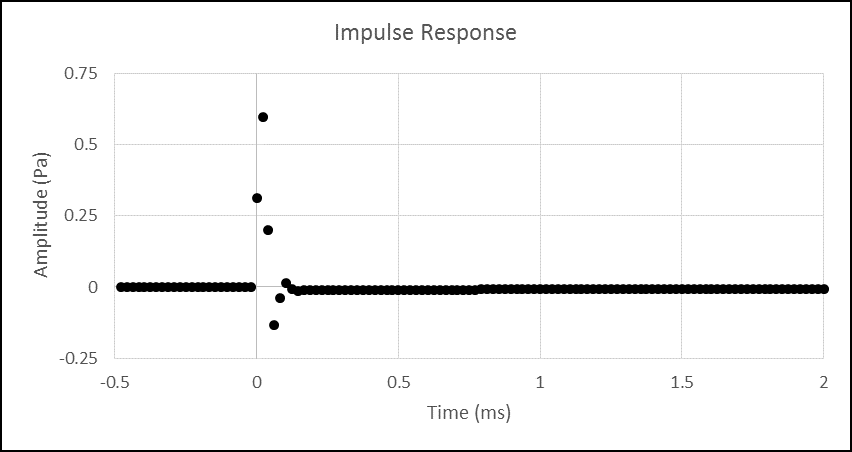 From figure 16, it is clear that the initial arrival of the impulse is correctly placed at 0ms. Most analyzers do not have the capability to change the graph from line to dotted graph, therefore it is important to always observe the transfer function (magnitude and phase responses) and impulse response at the same time. 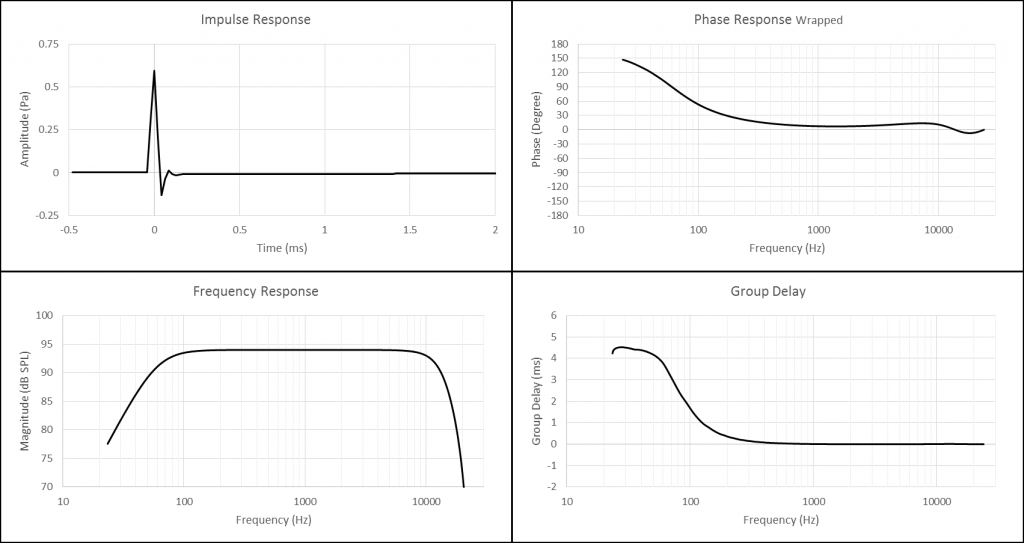 What happens if an auto delay finder is used? Let us observe figure 17.

A phase response that has positive values can be observed in the next example, figure 18. A 2in woofer in a small closed box is measured at 1m away. The measurement is done without electronic filter and is a minimum phase system. 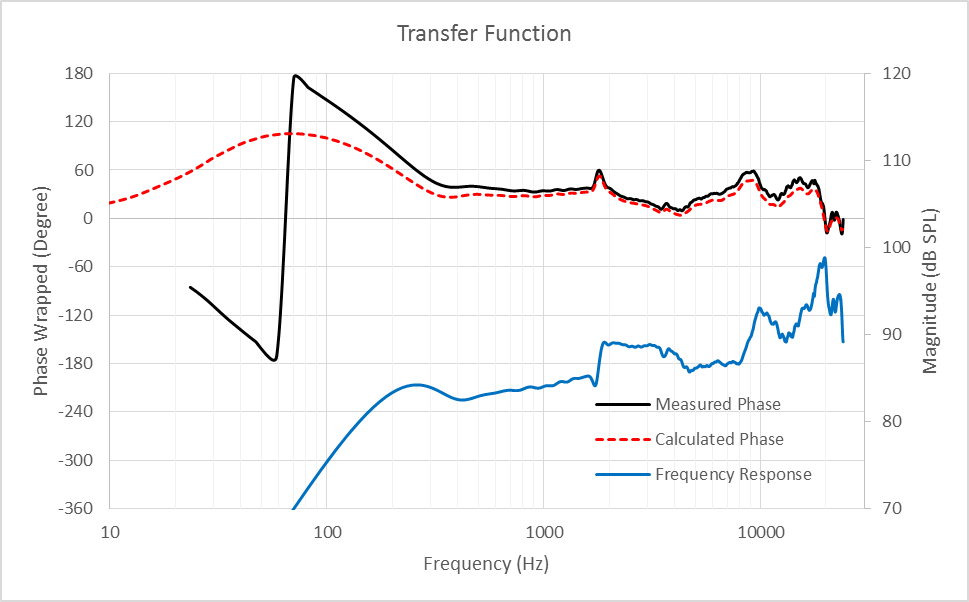 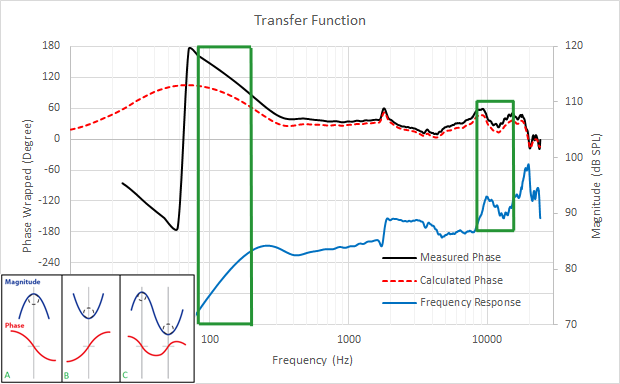 Meaningful in this context is useful for engineering use. Please see two phase responses in figure 20 below. 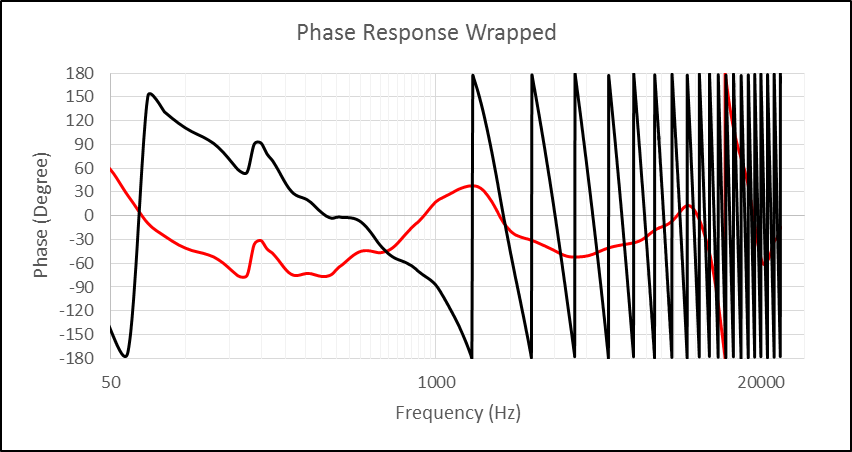 Let us do some visual observations of figure 20:

Both curves in figure 20 are referring to the same measurement file. The black curve has the correct propagation delay removal, the red curve on the other hand is placing the peak of the impulse at 0ms (such as using auto delay finder function) with the input’s polarity reversed.

There are always ways to make the phase response look flatter, but it does not mean it is useful for engineering use. We will discuss more about the black curve below. Let us discuss phase response with a comparison example. 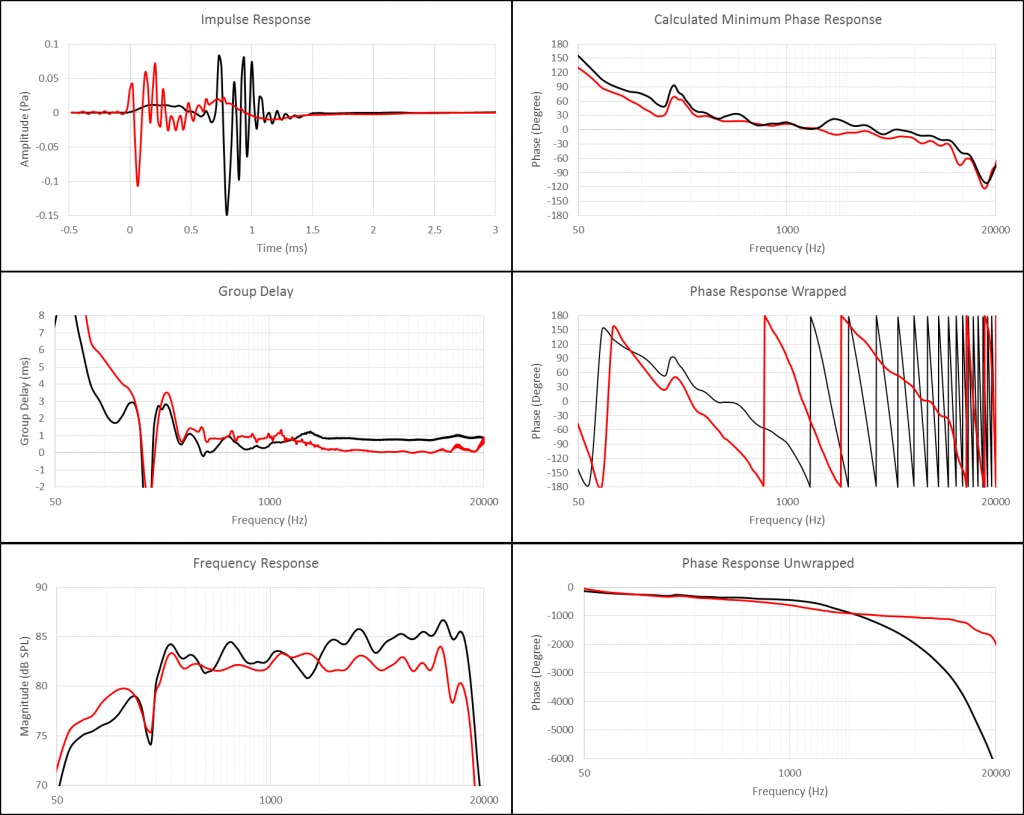 When an audio practitioner correctly removes the propagation delay in the impulse response, meaningful observations can be recognized. The discussions and observations below are focused to anything related to phase only.

Let us go back quickly to figure 20, the red curve. The passive loudspeaker phase response can be shown flatter by placing the peak of the impulse response at 0ms and reversing the loudspeaker input’s polarity during measurement. While this can be used for marketing/showing-off purpose, the phase response is misleading and is not meaningful for engineering work.

We would like to thank Pat Brown (www.ProSoundTraining.com), Riccardo Balistreri and Chris Devenney for their insights and for reviewing this article prior to publication.hs