8 Reasons You Should Be Using B-Format for Room Measurements

There is no better time than now to start using B-format. Here are 8 reasons for using B-Format for room measurements. Get on board now to prepare for the future.

I’ve been buzzing about B-Format  (referred to hereafter as B4, where 4 is short for “Format”) room impulse responses for several years now, in hopes that the idea would gain traction within the professional audio and acoustics communities. Search the SynAudCon website for “B-Format” for a host of articles. I’ve been in this industry long enough to see great ideas either live or die based on either the effectiveness of marketing, the whims of the marketplace, or both. When I started down this rabbit trail, I wondered if B4 would sink or swim with regard to professional audio work.

One thing that has hampered B4 development is that few entities were directly making money with the format. This sort of relegated it to “niche” status. But this is no longer the case. The sudden growth of the virtual reality (VR) market has breathed new life into B4 use and development. I’ll talk about that more at the end, but for now let’s revisit the reasons that B4 makes an excellent format for capturing and archiving the room impulse response (RIR).

B4 is usually derived from A-Format (A4 hereafter) since an A4 microphone is more physically compact than a true B4 microphone. Small physical size is an important characteristic for measurement work. A4 consists of 4 cardioid capsules, arranged as shown in Figure 1. A4 can be decoded to B4 using special software that comes with the A4 microphone (Figure 2). In addition to creating microphone patterns, B4 is a means of producing content for an Ambisonics playback system – a system in which a full sphere sound field can be produced (or reproduced) without the requirement for tracks panned for specific playback channels, such as left, right, center. In Ambisonics, the audio file is decoded by special software once the user has identified the loudspeaker positions. This means that the same recording can be decoded “on the fly” to numerous playback configurations, including binaural with head-tracking, eliminating the need for a special mix for each. 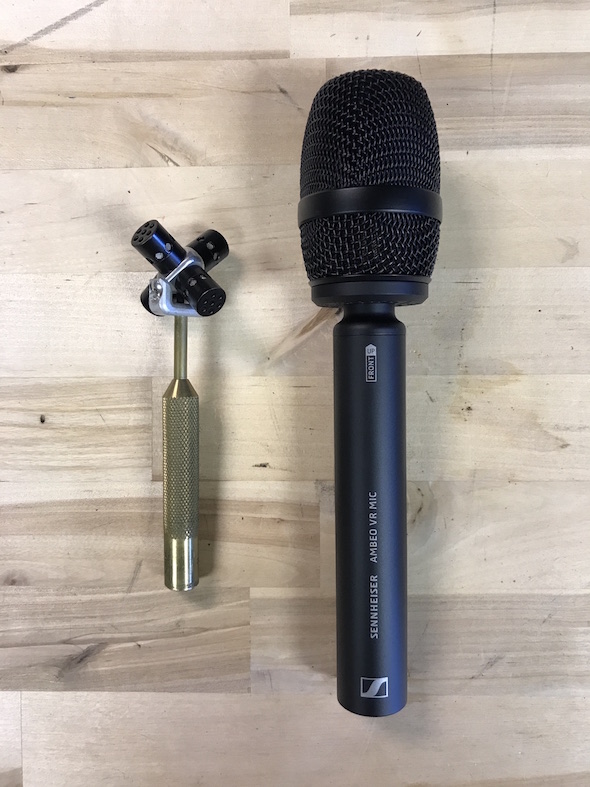 Fig. 1 – The Core Sound TetraMic™ (left) and the Sennheiser Ambeo™ (right) are both A4 microphones. A key difference is that the Tetramic requires mic-specific calibration filters that must be included when decoding A4 to B4. The Ambeo does not require these filters, suggesting that the 4 capsules are matched (by selection) during the manufacturing process. 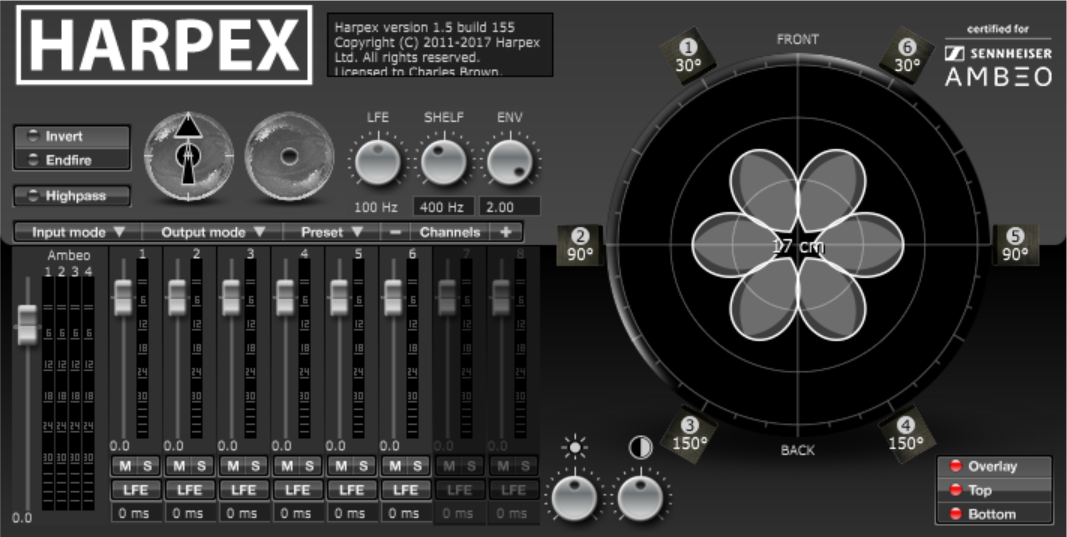 Fig. 2 – This VST plugin decodes the A-Format data from a Sennheiser Ambeo microphone “on the fly” for playback over various loudspeaker configurations. A 6-channel hexagon playback system is shown (courtesy Harpex™).

If you are using sweep recordings to produce your RIRs (and you should be!) A4 doesn’t require any more site time than omni or XY-stereo recordings. You’re still going to setup a mic and recorder and move it around the room. Once past the initial investment, you’ll gather vastly more information about the room using B4 with no extra time spent in the room. That’s a good deal.

Post-processing the sweep recordings using GratisVolver™ takes no more time with 4-ch files than with 2-ch files (Figure 3). You’ll just need to make sure that your WAV editor (used for some intermediate steps, such as trimming) can

Wave editors that I have successfully used for this include Wavosaur™, Acoustica™, and Adobe Audition™. 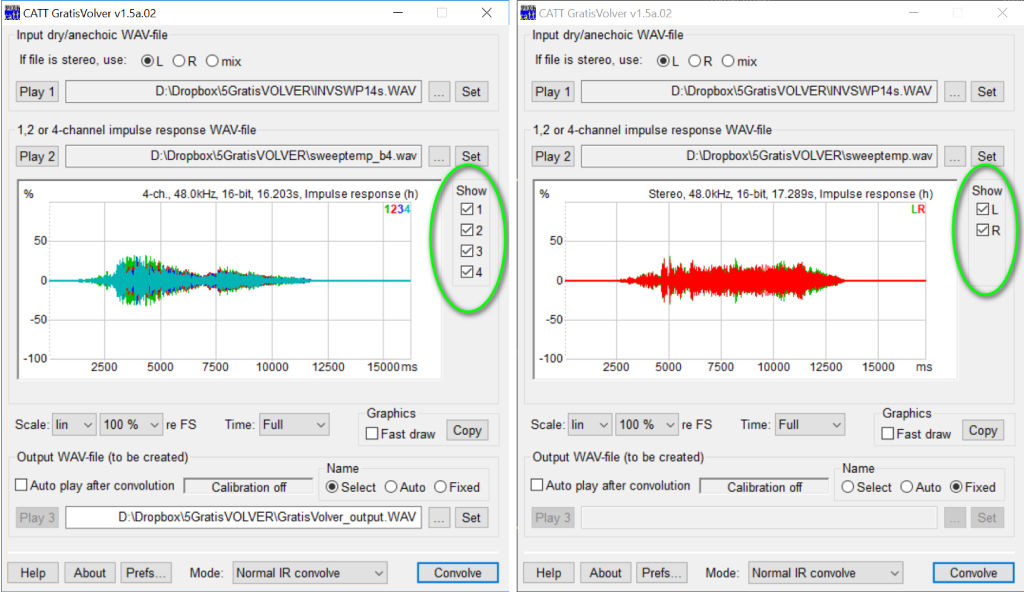 Figure 3 – A 4-ch wet sweep (left) takes no longer to deconvolve in GratisVolver than a 2-ch sweep (right).

The use of a portable recorder means no bulky cables on site, even for 4-channel data. The gear needed for a room survey can be carried in a compact kit, the contents of which need never change based on the specific use of the data. In addition to the microphone, you’ll need a 4-channel recorder and a signal source for playing the sweep. I prefer the NTI MRPro™ for this purpose, but your smart phone should do nicely.

The 4-ch recorder needs XLR inputs. Shown below is the Edirol R-44™. Other options include the Zoom F4™ and the Sound Devices MixPre-6™, the latter looking like the best overall solution (Figure 5). 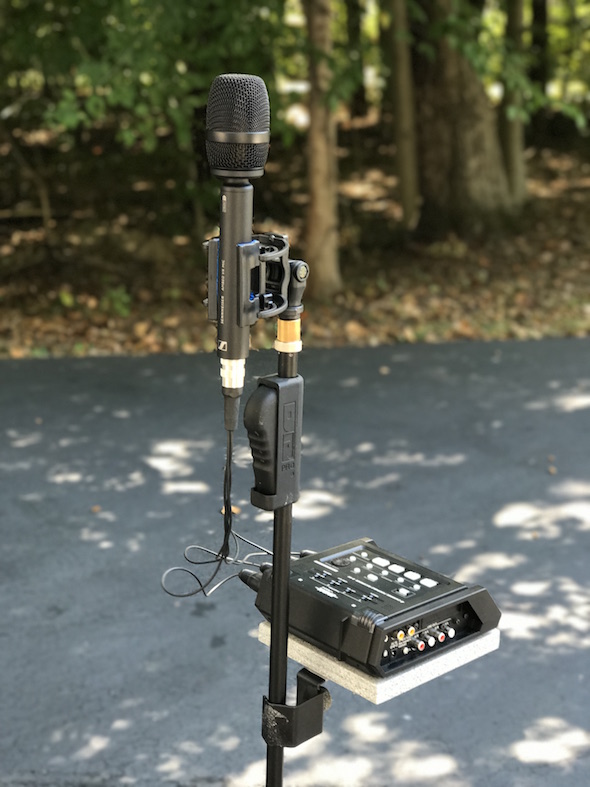 The breakthrough brought by the TEF analyzer in the 1980’s was the ability to show when the sound arrived at the measurement position via the Energy (or Envelope) Time Curve – ETC. Until that time, acoustic measurements were largely “time blind” and only frequency domain information could be observed. B4 takes this a step further, and includes information on the direction of sound propagation. From a single B4 RIR, the investigator can know when, what, and from where. It’s a more complete picture of the room’s acoustic behavior for a given measurement position.

ReflPhinder™ allows the investigator to aim a patented “Sector Mic™” in any direction, and observe the log-squared ETC (Figure 6). The sector is adjustable from 2-30 deg. The ETC can be listened to, convolved with music or speech, or exported as a mono file for post-processing in an acoustics measurement program, such as ARTA™.

Fig. 6 – ReflPhinder allows the investigator to scan the room and locate the propagation direction of an arrival.

5. Omni is part of the package

Room metrics such as the reverberation time (T30 as per ISO3382) are best determined with an omnidirectional microphone polar pattern. The B4 RIR is a 4-channel wave file, and channel 1, by definition of the format, is omni (at -3 dB level relative to actual) (Figure 7). Measurement programs such as EASERA™, ARTA™, and RoomCapture™ can open channel 1 for post processing, ignoring the other 3 channels that carry the directional information (Figure 8).

So, a single RIR can yield omni information for ISO3382 measures and directional information (with the proper software). With a B4 RIR one file does it all, since it can be decoded into numerous formats, some of which are described in the next section. 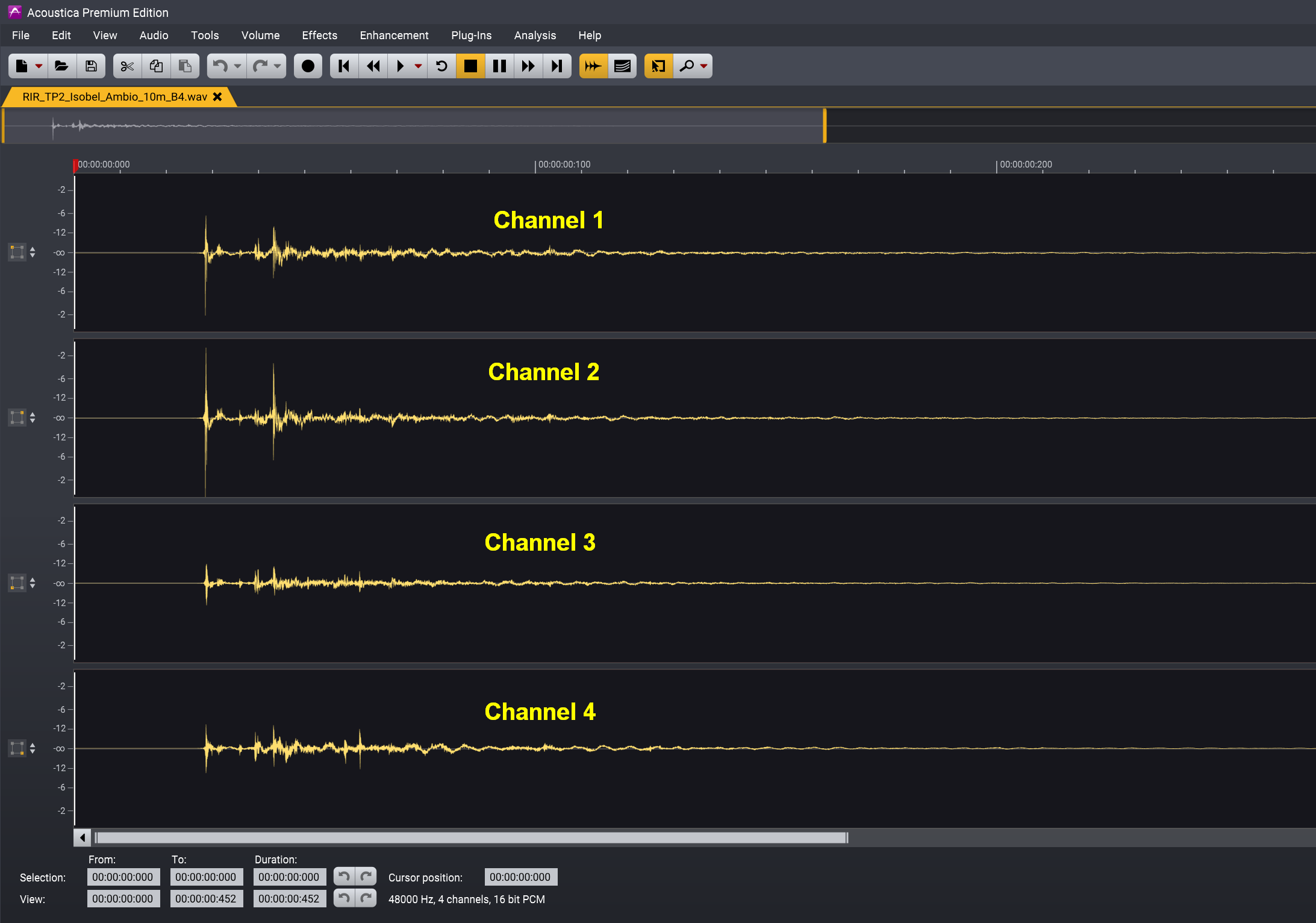 Fig. 7 – The B4 RIR opened in Acoustica. Channel 1 is omni. Channels 2-4 are figure-8 patterns for the X, Y, and Z directions from the measurement position. 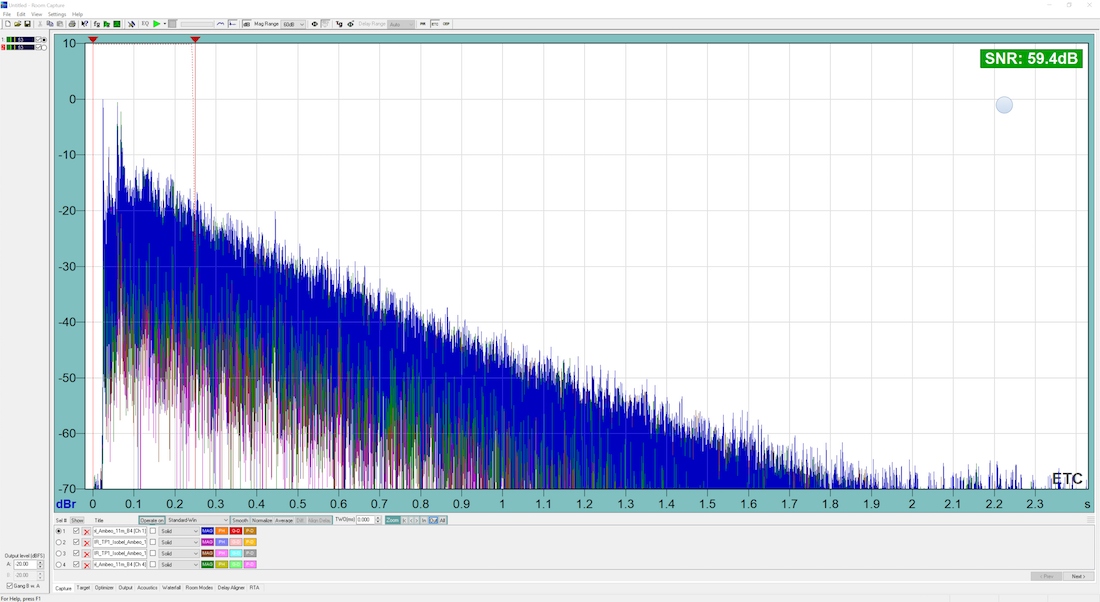 Fig. 8 – A 4-channel ETC of the wave file of Fig. 7. Channel 1 can be selected and post-processed to yield the acoustic measures for an omni microphone pattern (courtesy RoomCapture).

“Decode” is an important word in the A4 and B4 worlds. A multiplicity of microphone polar responses are mathematically related and can be derived by calculation. Decoding converts A4 to B4, and B4 into whatever first order microphone pattern you would like, including cardioid, figure-8, super and hyper cardioid, XY stereo, and Blumlein (crossed figure-8’s) (Figure 9). These can also be aimed in any direction. Never again will you have to decide which microphone to use for a room survey. With B-Format, you have them all.

There are many other VST plugins that offer additional decoding capabilities, such as rotating the entire sound field. Also, B4 is a stepping stone to higher order Ambisonics, described in the next section.

Fig. 9 – A VST plugin can decode the B4 data into other microphone patterns (courtesy Blue Ripple Sound).

B-Format RIRs can be “upsampled” to higher order Ambisonics. The upsampling is based on spherical harmonics, and the higher the order, the higher the precision with regard to directional information contained in the RIR. Upsampling cannot add information to 1st order B4, but it can make it compatible with higher order signal processing algorithms. VST plugins that use 3rd order Ambisonics are affordable and can be run on multi-channel digital audio workstations such as Reaper. Higher order Ambisonics is especially useful for producing content for multi-channel playback systems, such as Imax™, Dolby Atmos™, and Auro 3D™.

Imagine playing back your RIRs in a 3D audio environment that (virtually) puts you back into the room that you collected them in. Pictured below is a “speakerdome” playback system with 9 audio channels (six surrounds + two overheads +1 subwoofer) running over a Dante™ network. It uses Dante Virtual Sound Card™ on the PC, which avoids the need for expensive audio hardware. Audio-over-Ethernet (AoE) is an economical way to put together a multi-channel playback system. 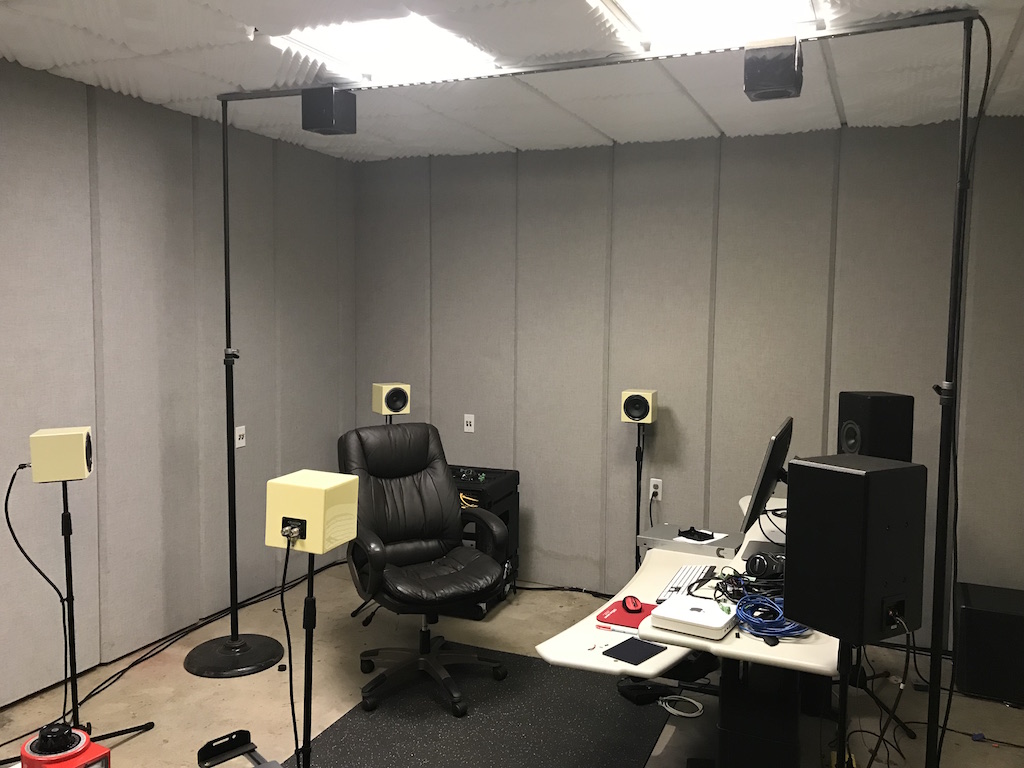 Virtual reality will be to B4 what Ethernet networks are to Dante. We now have a cash cow to fund the extensive R&D and drive down hardware costs. VR also creates a new market for audio professionals. We’re the ones that have the tools and expertise needed to do multi-channel sound right. It’s a sure bet that auditorium owners will want 3D sound in their venues, driven by VR hype and a higher expectation level from the consumer.

If you’ve been thinking about dipping your toe into the B4 pool, there’s no better time. You probably have some of the parts and pieces already. The SynAudCon library is full of articles and data that will help you on your journey. Video technology gets cooler by the day. There’s no reason for audio to stay stuck in the past.  pb