SUMMER 1982
©Don & Carolyn Davis
During the Minneapolis class, we were able to demonstrate the highly audible effect caused by two loudspeakers at equal level but about 1″ out of time alignment. (The effect sounds like a low pass fil ter is in the ( circuit.) At this point in the demonstration we tried mixing in a second demonstration. We switched in and . out our 3 dB pad on one of the two loudspeakers. The results were startling to say the least. Over the majority of the listening area the subjective loudness increased by 10 dB when one of the two equal level loudspeakers was dropped by 3 dB.

(Newsletter Volume 9, No.2, page 21, “Split Speakers? Reduce One Channel 3 dB,” credits CLEON WELLS of Chicago Recording with asking during our last Chicago class, “What happens if?”. Recently we were telling Cleon how pleased we are with his suggestion and he said the idea was first suggested to him by Mike King of Chicago Recording.)

In assembling combinations of loudspeakers, either all in one place or spread out over a wide area, it is important to be alert to which listeners will hear them at near equal levels but at differing time intervals.

This translates into concern whenever sound from two sources will arrive at equal levels but with time differences of 50 msec or greater (see the Doak and Bolt criteria, Fig. 7-46, page 130, of SOUND YSTEM ENGINEERING) or with time differences of l.0 msec or less. The area of from 3 msec up to 50 msec can, on occasion, be audible depending upon the number of accompanying reflections. 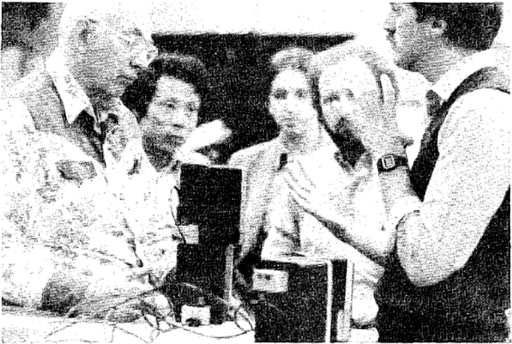 ALAN McCUNE of McCune Audio in San Francisco, which recently celebrated their 50th anniversary, tried many “what if” combinations during our May San Francisco class. It’s during these “what happens if” sessions that we all learn so much .. like reducing one channel by 3 dB.

This paper has had frequent referencing to it by many of the “literature researchers,” most of whom do no listening–just reading.

Actual energy time curve (ETC) measurements accompanied by trained critical listening has repeatedly resulted in audible problems in two-way sound systems when the tweeter and woofer are within 1/2 inch of each other’s acoustic centers.

We are beginning to suspect that the Blauert and Laws criteria are in reality the upper curve for an “envelope” whose lower limit represents the area of one inch or less of time difference. In other words, time differences of less than one inch are audible-from one inch to about two feet are not audible and then over two feet they once again become audible.

It is true that it is very difficult to hear the separation in time of two signals until it has increased to the length of time Blauert and Laws indicate. We merely feel that they may have overlooked the fact that a very small time separation falls into a special category at the bottom of their chart.
The Blauert and Laws criteria is correct in delineating 3 msec or greater as detectible but they fail to realize that their curve is the upper one for an envelope with a lower curve around 0.5 msec. (See Illust. #1) 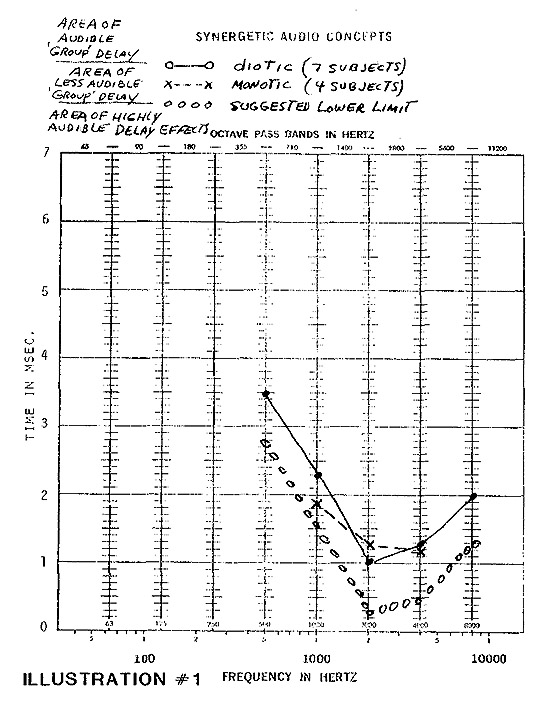 The Haas effect usually takes over for equal level signals separated by anywhere from 3 to 30 or even 40 msec. We can’~ help but wonder how many “dead spots” are not due to lack of coverage but to too much coverage from unequal distances actually canceling each other

Place two loudspeakers 1″ apart and feed them equal level signals. (See Illust. #2) Sit about ten feet away and listen. Have someone switch first one on and then both on. Move through the sound field and hear how broad the area is that is affected by this effect. Then with both units on, reduce one of them by 3 dB. Note the increase in both high frequency response and, but even more apparent, the rise in loudness. 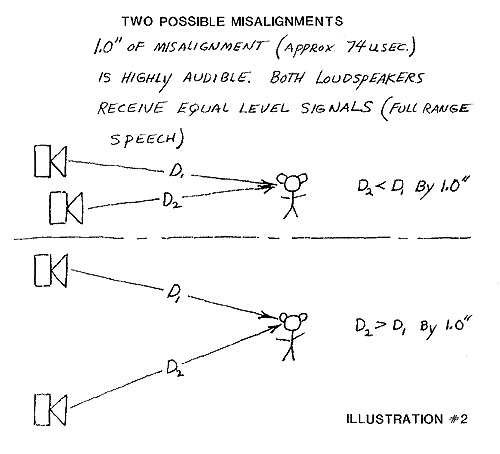 Now place the two loudspeakers 5 feet apart and repeat each part of the experiment. We believe that you will quickly agree with us that the bottom limit that should have been included in the Blauert and Laws chart is by far the most audible.
https://www.prosoundtraining.com/wp-content/uploads/2016/12/synaudcon-1.png 0 0 Brenda Brown https://www.prosoundtraining.com/wp-content/uploads/2016/12/synaudcon-1.png Brenda Brown2010-06-20 14:11:152017-05-23 15:16:31Levels And Time Differences