The impulse response in its various forms remains the premiere characterization of the acoustic response of rooms of all sizes. It yields all of major acoustic measures, such as reverberation time, early-decay time, clarity ratios and even speech intelligibility. When anechoic program material is convolved with the impulse response, the in-room listening experience can be recreated at the personal computer.

Two previous articles provide the backdrop for this one. The reader is encouraged to peruse them before proceeding.

Moving forward, it is time to share some advancements and refinements that have been made in this area of room testing. 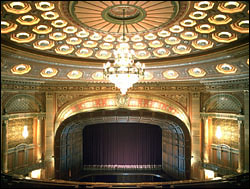 The Pittsburgh, PA Sound Reinforcement for Technicians class was given an evening tour of the city’s theater district. The walking tour visited four spaces in two hours. When possible, I like to collect some room measurements when I visit an interesting acoustic space, but I had concerns of tacking four rooms in a two-hour span. On-the-fly measurements would be required. This is the perfect situation for the sweep recording technique that I have described in earlier articles. Here is a link to some background and resources on the technique.

The measurement instrumentation was spread between two pull-behind Pelican cases – one for the loudspeaker and the other for everything else. I tapped Langston Holland to help transport and setup the equipment. Each armed with a small Pelican case, we set out to capture the rooms. The plan was to just lag behind a few minutes in each space and make two or three sweep recordings. Langston handled the loudspeaker end and I manned the microphone and recorder. The method worked well, and since two people can move faster than 30, we were back in the pack in time for the next venue.

The loudspeaker choice is an important one, because there are some trade-offs. A dodecahedron provides strong energy in the impulse response tail, which is ideal for determining the reverberation time (RT). But, dodecs don’t sound good, and bear no acoustical resemblance to the directivity of a human talker or any loudspeaker that would be useful for sound reinforcement. The required amplifier and subwoofer complicate the ability to quickly move between the spaces – traversing sidewalks, curbs and stairs along the way. The NTI Talkbox emulates a talker, but the SPL produced is low and it doesn’t excite the room at low frequencies. It works great for RIR collection for the voice range  in a quiet space, but with a tour group in tow these would not likely be quiet spaces! So, while it was tempting to travel light and use the Talkbox, experience said that more horsepower was called for. The best compromise seemed to be a self -powered, medium directivity coaxial loudspeaker. This would provide good RT data along with acoustic measures that are representative of the use of moderate pattern control. This choice would also produce better sounding convolutions.

Traveling Light? Use the XY Stereo Recorder. Want more options? Use the TetraMic.

Of course I could have made the recordings with a 2-channel handheld recorder. This would have been faster and would have required less gear. XY stereo room impulse responses are adequate for many uses. But, it takes no more time to make a 4-channel recording, and there are some powerful additional possibilities with the files. One of the strengths of this technique is that the investigator can choose the microphone pattern later, so it is like collecting data using a half-dozen or so different microphone patterns.

My backup plan was to use the NTI Talkbox and a Sony stereo recorder. The recorder is small enough to fit in the Talkbox carry bag. This lunchbox-sized battery-powered rig would allow me to grab some sweeps with virtually no setup time. After arriving in the district and surveying the situation, we opted to use the larger rig.

The four-channel sweep recordings (A-Format) can be used to produce B-Format, which can then be post-processed into any of the first-order microphone patterns, including omni, cardioid, figure-of-8 and XY stereo. The post-processing from A-Format to B-Format is done with a software program that comes with the TetraMic. The B-Format sweeps are processed into impulse responses using additional software which I will describe next. So, what follows assumes that you are starting with B-Format sweeps, whether you use a B-Format microphone, or do as I did and use an A-Format microphone and then convert the results to B-Format in software.

The sweep recordings must be convolved with an inverse version of the sweep to yield the room impulse response (RIR). We have demonstrated the use of GratisVolver™ for this task for years in our seminars.

The RIRs from the theater district tour can be downloaded from the SAC IR Exchange. See project numbers 39-43. There were four main venues on the tour. The lobby of the Benedum Center proved interesting enough to add to the list.

A new suite of programs is now available that add immense power to the post-processing steps. MultiVolver WCP™  is a 16 x 16 convolver that is bundled with ReflPhinder™, a program that post-processes B-Format RIRs. Here is a short tour of each.

MultiVolver WCP can convolve the dry inverse sweep file with the 4-channel “wet sweep” to produce a B-Format RIR. It can also directly output other first-order microphone patterns. 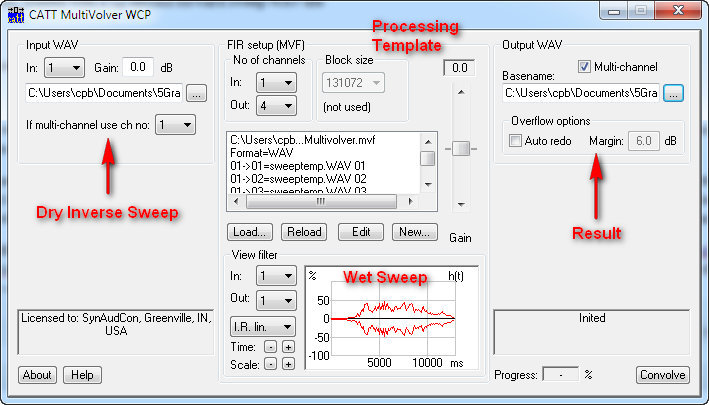 With only a few mouse clicks I have a B-Format RIR from my B-Format wet sweep. It does a LOT more than what I am using if for here. For instance, one could record an event in B-Format and use MultiVolver WCP to convert to XY Stereo for distribution.

Now the fun begins. The B-Format RIR is opened in ReflPhinder. 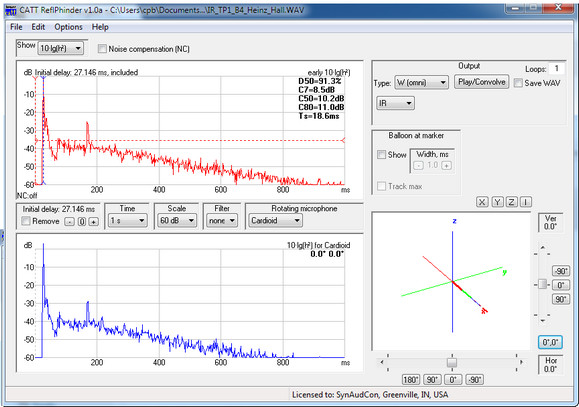 The following screenshots demonstrate some of the possibilities.

Room measures are calculated from the RIR. 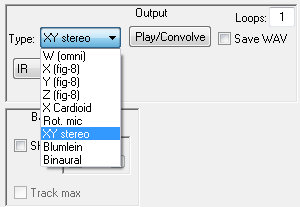 The B-Format RIR can be converted into these formats.  This is how I produced the XY Stereo RIRs referenced in this article. The selected format can be convolved with dry program material such as speech or music. Eight WAV file presets are provided. The convolution can be listened to or saved as a WAV file.

ReflPhinder gets its name from its ability to select a microphone pattern that can be rotated to any position around the measurement position. The ETC in the bottom window displays the results, which can be convolved with anechoic program material in nearly real-time. Imagine that you are sitting at the mic position with the ability to aim a hyper-cardioid microphone to any angle around you, and immediately listen to what it would sound like.  The sector microphone pattern provides an ultra-directional mic that can allow you to listen to walls, corners and other room features. You can know when a sound arrives, and where it is coming from. FIR or 6-th order IIR filters allow you to home in on a specific octave band. ReflPhinder is truly a reflection finder.

See the Sector Mic in Action

A 2-degree Sector Mic™ can render the IR of even a 6 s church near anechoic when aimed at the sound source.

I’ll go into more detail on this feature of ReflPhinder in a future blog. A full-featured 30-day demo version of the ReflPhinder suite is available from www.catt.se. Select “ReflPhinder” in the left side bar. 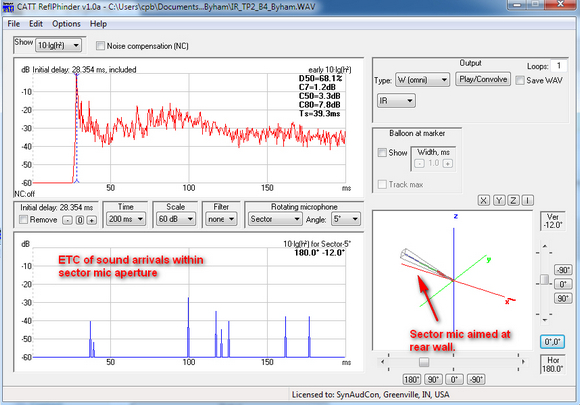 If you are going to measure, you might as well collect as much data as possible. B-Format RIRs give the audio practitioner a way to collect data that can be post-processed in many ways in a time-efficient manner. Only about 15 minutes were required in each venue on the theater district tour. This included the setup, data collection and tear down. The resultant data is pristine, and completely adequate for determining acoustic measures and performing convolutions. The ability to select the microphone pattern during the post-processing session means that you travel with fewer mics and need only to record a single sweep at each measurement position.

It is no longer a dilemma on whether or not to make measurements on a site visit.  A better question is “Why would you not?”  pb