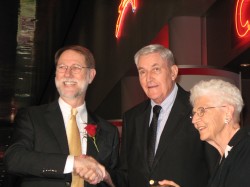 Take a few minutes to listen to this rare 8 minute interview. ( To view Don’s interview, click on the “In Their Own Words” tab, then scroll down until you see his name.  The interview consists of 3 videos.”) The interview includes:

A few words from Pat Brown:

Watching these videos was a wonderful flashback to the classes held at the Farm in Indiana. Don began each lecture with clarity and authority, stating the fundamental principles as delivered in these videos. On many occasions it was apparent from watching the faces of the attendees that their thinking about these topics had already changed from just a few sentences. Many would make phone calls at the next break to put projects on hold until they had time to rethink their designs.

It is a bit humbling to watch a master summarize in a few minutes what I struggle to convey in a week-long seminar.

A few words from Don Davis:

We are standing on the shoulders of giant – the giants from the past that taught us what it means to be a professional in audio and acoustics.

Our philosophy of sharing, coupled with the search for truth gained by careful measurements of real devices and systems, won over the vast majority of witnesses to our efforts.

Pat Brown’s investment in today’s state-of-the-art polar measurement equipment (expensive, extensive and precision) carries on the SynAudCon tradition of being able to demonstrate the “truth” about such sophisticated concepts as asymmetrical loudspeakers.

Carolyn and I pioneered many early digital devices and championed their use, but it was left to Pat and Brenda Brown to carry the measurements into the computer age that we now enjoy. Their measurements of real devices and how to fit them meaningfully into the best design programs continues the search for the truth in an ocean of claims.

Pat’s work with the acknowledged best of computer programmers to properly fit his precision data in their space projection is without parallel.

Carolyn and I rejoice that Pat & Brenda have insured that the name SynAudCon continues to mean truth, integrity, and meaningful knowledge transmitted to yet another generation. dbd