In this article, Richard addresses this question, “Do People Absorb Sound”. The answer is not as simple as it can appear. 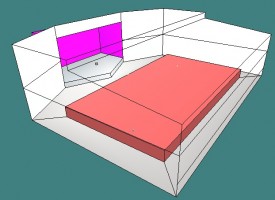 A post to an audio discussion group raised the question this blog discusses. The short answer is “yes”, but short answers are often misleading. For a useful answer, we need to know: are you talking about direct sound, reverberant sound, or total sound? The only way people will lower the direct sound level is if they are between the speakers and the listener. But people do contribute quite a bit of reverberant-sound reduction. In fact, in many rooms, the audience is the primary absorber of sound. (Yes, 4 Sabins doesn’t seem like much, but how about when you multiply it by 250 people?) Then it is comparable to a 1000-square-foot wall covered with 4″ fiberglass.

Let’s look at the effect of adding an audience to a multipurpose room furnished with un-upholstered plastic chairs. The rendering above shows the room; the pinkish block in the middle is the audience area. The single omnidirectional sound source is located 5′ above the center of the stage, in the plane of the front wall.

First, the reverberation time (RT60). The graph on the right below shows the RT60 of the empty room. The one on the left shows RT60 with the room fully occupied.

Overall sound is a blend of direct sound and reverberant sound, and thus is affected by the presence of people. If the listener is closer than the critical distance, direct sound predominates, but at further distances, reverberant sound rules. Thus the effect that people in the space have on overall sound depends upon the listener location. Certainly the sound character changes when people are present, as the increased absorption will significantly reduce reverberation time if there are a lot of people. As shown in the mapping below, occupancy does not make much difference in the overall sound level in this fairly typical well-designed multipurpose room.

The increase in noise floor is also important, as our psycho-acoustic perception of sound depends upon many things besides the actual SPL. If this were a room in which occupants would be talking during events (such as a cafeteria), occupancy would make a great deal of difference in background noise, but for a worship service, the effect of occupancy upon noise is usually not great, depending , of course, upon the audience demographics and the squeakiness of the furniture.

A more useful question is “How does the audience (or congregation) affect the acoustics of a listening space?” This can be quantified by several measures that have been developed for concert-hall acoustics. Definition (D-50)and clarity (C-80) are related measures that mean pretty much what the names imply. They quantify some effects of early reverberation as it relates to human perception. Definition is usually related to speech; and clarity, to music. As shown by the mappings below, both of these are slightly improved with full occupancy, due to reduced reverberation. The upper mappings represent the empty room; the lower ones, full occupancy. 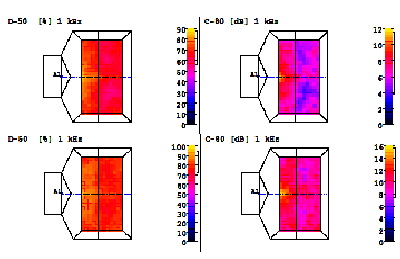 Lateral fraction (LF) quantifies the reflections off side walls and the resulting sense of spaciousness. Acoustical strength (G) is the “room support” — how much louder a given source sounds in the room than it would at the same listening distance outdoors. 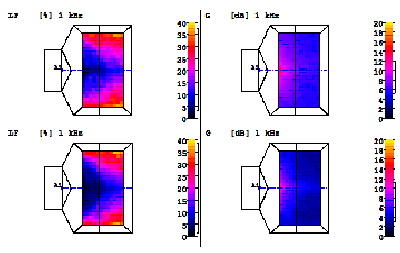 Both LF and G are changed slightly by occupancy, although the effects a listener will experience depend upon the listening position.

The final metric we shall examine is speech transmission index (STI), a measure of speech intelligibility. STI can span a range from 0.20 (horrid) to 1.00 (very excellent). The illustrations below show the STI at three listening positions for empty (left-hand) and full (right-hand) occupancy conditions. 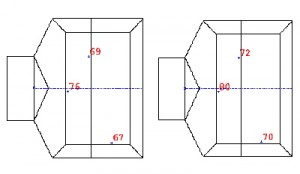 The mapping results show that full occupancy has small but noticeable effects upon the acoustics of the room. The most robust effect is upon RT60. If the room were less well-designed acoustically so that it had a higher RT60 empty, occupancy would make more difference: Live rooms are more affected by occupancy because the people may contribute most of the acoustical absorption. Also notice that the effects of occupancy are not in general things that can be compensated by the faders on your mixer, so to the extent that “people suck up sound”, it is largely an issue of acoustics and musical performance (better musical articulation in empty rooms), not of sound-system operation. The myth-or-truth verdict? Do people soak up sound? Ye-e-e-s, but . . .  rh