This article shows the results of some MIV (Maximum Input Voltage) tests, aka Toaster Test, for a loudspeaker.

With the recent thread about loudspeaker power ratings, I thought it may be interesting for some to see the results of some MIV (Maximum Input Voltage) tests, aka Toaster Test, for a loudspeaker.  These are not for a full-range loudspeaker, unfortunately.  Figure 1 shows the test results of a 15 inch low frequency driver, while figure 2 shows the results of a 1.4 inch exit compression driver on a 90° x 60° horn.

The bottom graph in each figure is the response deviation of the DUT (device under test) at the end of each level increment.  This is simply its response at the indicated input voltage relative (normalized) to its response at an input of 10 dBV (3.16 V).  The 15 inch woofer doesn’t have a 3 dB deviation until an input level of 33 dBV.  At this level the test was terminated.

The broad band SPL was recorded for each input level.  This was done at the end of each stage (just prior to increasing the input voltage to the next level) to assure that the effects of heating are included.  The SPL is graphed as an absolute level in the smaller upper graph in each figure.  It is compared to a perfectly linear increase.  The lower smaller graph in each figure shows the difference between the actual SPL and the linear: the compression or sensitivity decrease.

Some have questioned the validity of this type of testing from the stand point of the test duration being only 3 minutes.  I can’t speak for others performing similar tests, but when I conduct an MIV test on a loudspeaker or a loudspeaker system it takes a lot longer than 3 minutes.  I require that the output response of the DUT be monitored for at least 1 minute at each voltage input level.  It is a further requirement that after the 1 minute minimum the output response is no longer changing significantly.  This is easy to do with the curve capture functionality of many measurement programs.  The typical test duration is on the order of 20 – 30 minutes

Once the design of the loudspeaker system utilizing these components is complete and I have conducted an MIV test of the system with the passive crossover I will try to remember to update this to include the test of the full-range loudspeaker.

We should be able to see this type of testing included in a couple of loudspeaker standards (both professional and consumer) in the near future.  It has been a long time coming. 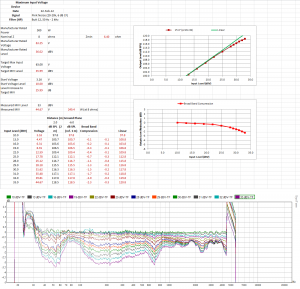 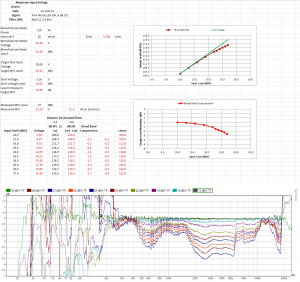 Figure 2 – MIVtest results for a compression driver on a horn