Pat Brown presents an abbreviated loudspeaker power test that you can do at home. It includes the necessary details, including the equipment setup.

The 2005 Newsletters included a number of articles related to loudspeaker power ratings and the methods used to determine those ratings. There have been a number of inquiries as to the details of the various methods. Descriptions of the Standard methods are included in the respective Standard document. Detailed elaboration on those requires interpretation, so I won’t attempt it here. The burden is on the investigator to obtain a copy of the Standard, interpret it, and construct a test believed to comply with it. What I can present are the details on how I conduct a “sanity test” for the power rating of a loudspeaker. I will include all of the necessary details, including the equipment setup. It should be noted that with the possible exception of SmaartLive™ real-time transfer function, there is nothing really unique about any of the gear – you can substitute a similar unit with no significant effect on the outcome of the test.

The article following this one in this Newsletter DSP Comparison Part 3 describes a method for determining the voltage sensitivity of a loudspeaker for a 2.83Vrms input signal. This article is a logical preface to it, and the two together provide a more complete discussion of the topic.

The use of 2.83Vrms is in keeping with the traditional practice of referencing loudspeaker sensitivity to one watt of applied power (or at least something related to one watt). It should be noted that almost any voltage would serve as a suitable reference. One volt makes particularly good sense because it is easily scaled with little mental effort and can be expressed as a level of 0dBV.

However, one cannot be too quick to part with tradition so a voltage of 2.83Vrms (+9dBV) shall be used in this article. This applied RMS voltage produces a sound pressure level near the limits of human endurance at one meter (80-110dBSPL) from most loudspeakers designed for sound reinforcement applications.

Once the sensitivity is known, the next logical question is “How much can I turn it up before it breaks?” The test described in this article is a means to an answer. It is not intended to replace power testing according to a recognized Standard. The Standard tests should be conducted by the loudspeaker manufacturer and the results presented on the loudspeaker’s specification sheet. This is more of a “sanity check” – a relatively fast and simple way to validate the results of Standardized testing and to make sure that power specification is being interpreted properly.

Power ratings are ambiguous by nature, and they al- ways produce some questions. For example:

Ambiguity regarding power specifications can cause design errors on the order of 10dB or more – an intolerable margin of error. Having witnessed on several occasions room models that predict SPLs 10dB or more higher than what could be achieved by the installed system has prompted me to scrutinize power ratings and SPL predictions in general.

Ambiguity regarding power specifications can cause design

errors on the order of 10dB or more.

Placing a voltage across a loudspeaker causes current to flow through it. The electrical power transferred to the loudspeaker is the product of the voltage and the current. The resistive component of the loudspeaker’s impedance will cause some (most!) of the applied power to be converted into heat, and a loudspeaker can only dissipate so much heat before it is destroyed. This consumed power is unfortunate but it’s a reality of the physical world. It is desirous to know when the thermal limits of the loudspeaker have been reached. What follows is a simple, real-world method for determining the maximum Vrms that can drive a loudspeaker. This Vrms can be converted to a power rating for amplifier shopping.

Not One Test, But Two

A distinction must be made between thermal testing and transient testing. Thermal tests use the RMS (Root-Mean-Square) voltage of pink noise shaped to a standardized spectrum. This waveform is described in more detail in the next article. Since RMS is the equivalent DC voltage, it really doesn’t have anything to do with revealing the short term, transient limitations of the loudspeaker. That’s a separate test and that’s a separate rating (See “Composite Tone-Burst Test” by Don Keele Syn-Aud-Con Newsletter Vol. 33 No. 4 for one such test). The test described herein is all about heat, so we can dismiss terms such as “short term,” “instantaneous,” “program” and “burst” for this rating. Those parameters must be determined by a completely different testing method that uses a maximum allowable distortion figure to determine when the loudspeaker’s limits have been reached. Such parameters don’t have as much to do with power dissipation as they do with the mechanical limits of the loudspeaker. In other words, short term events don’t generally toast the voice coil, they make the loudspeaker come apart. Fortunately, if an amplifier is selected that stays within the thermal limits of the loudspeaker and provides adequate peak room to pass typical program material, it is not likely that the transient limitations of the loudspeaker will be exceeded under normal operating conditions.

A real-world power test is easy to construct given the off-the-shelf tools owned by most serious audio people. These include:

The signal chain is shown in Figure 1. The pink noise stimulus can be produced with a wave editor. Note that this is a severely clipped signal that must be spectrally shaped to emulate music according to the Standard. Do not use this as a stimulus for general system calibration chores! 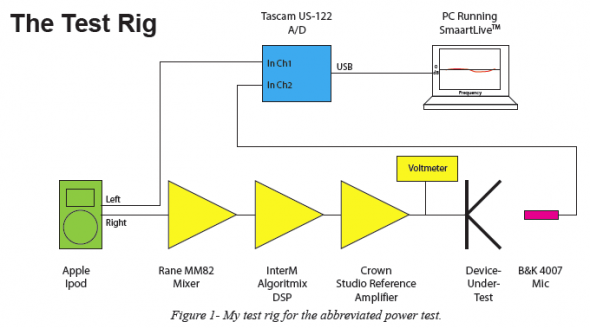 The IEC 268-1 noise file must be increased in level at regular time intervals during the test. Rather than stand by with a stop watch, I built the level increases right into the test track – a special wave file for power testing. It emulates a “bad sound guy” – someone who just keeps turning it up at regular intervals until the loudspeaker’s response shows a significant change. A time domain view of the test track is shown in Figure 2. The noise track was modified to increase in level by 3dB every five minutes – a level change consistent with a “volume tweak” of a sound system for each successive song. The total length is just under 1 hour, so ten level changes will occur with an overall range of about 30dB. The absolute level of the signal can be set to be appropriate for the loudspeaker under test. For garden variety medium-directivity PA loudspeakers I usually adjust the playback system so that the Vrms of the 7th noise segment is about 30Vrms (+30dBV), which is the equivalent of about 100 watts continuous average power into an 8 ohm resistive load. It can be increased or decreased to be appropriate for smaller or larger loudspeakers. 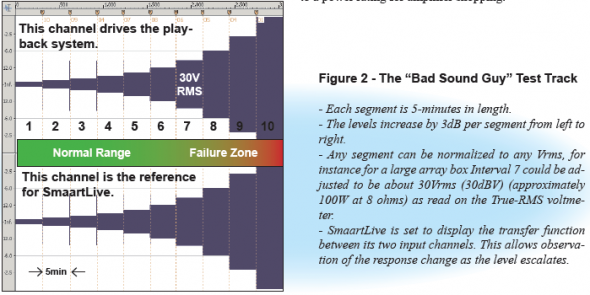 This is an extremely simple test to implement.

When is it over?

Most Standard test methods require that the loudspeaker be driven to failure or until the response has been permanently changed. The criteria I use for “failure” is a 3dB change in the loudspeaker’s transfer function from an initial low-power reference response (Figure 4). We don’t want to blow stuff up here, just find out a good working limitation. The 3dB response change indicates that damage is imminent if the voltage is increased again. At this point the system should be turned down, not up! 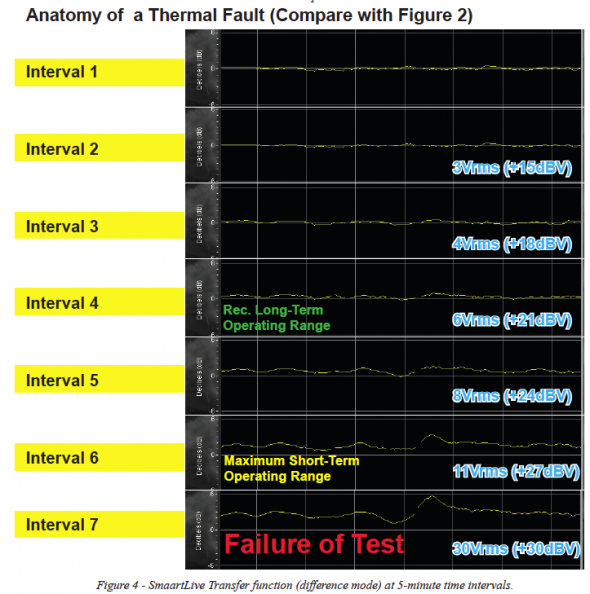 Here are some caveats regarding thermal testing in general:

Minimum Impedance – Gives the highest power rating, but not the actual power consumed during the test.

Nominal Impedance – Gives a slightly smaller power rating, but not the actual power consumed during the test.

Average Impedance – Gives a significantly smaller power rating but one more in line with the actual power consumed during the test.

Weighted Impedance – Weights the impedance curve relative to the spectrum of the applied signal. This is the most correct method, but requires significant calculation. It produces a relatively low (but correct) power rating since the loudspeaker’s impedance as seen by the amplifier is program-dependent.

Ironically, the “more correct” methods that use the average or weighted impedance produce significantly lower power ratings than those that use the minimum or nominal impedance. While on one hand this can be seen as conservative, on the other it will suggest the use of an amplifier with grossly insufficient voltage swing to pass the test stimulus. This makes the maximum Vrms specification attractive, since it, and the power rating described below that comes from it, independent of the impedance of the loudspeaker, as they actually are in reality.

Once the Vrms limit of the loudspeaker is found, the sound designer may select an appropriate amplifier. The maximum Vrms can be given in the Common Loudspeaker File format (Figure 3). The Equivalent Amplifier Size as given in the CLF indicates the 8 ohm sine wave amplifier rating that would be required to produce the Vrms of the test signal that reached the loudspeaker’s thermal limit. It says that “If you use an amplifier with this rating and drive it into severe clipping with typical program material, the loudspeaker will last less than 10 minutes.” The same amplifier passing higher crest factor program material (i.e. CD or MP3) and set to produce only occasional clipping will likely give the highest safe, reliable continuous SPL that the loudspeaker can deliver.

So there you have it. A simple, fast, defensible and repeatable way to determine the maximum safe SPL from a loudspeaker based on thermal considerations. There really isn’t any way to skew or inflate the result – it just is what it is – the maximum Vrms of the specified spectrum that the loudspeaker can handle for a reasonable amount of time before it starts misbehaving. It’s not a Standard method and has not been submitted to the extensive peer review that Standards enjoy, so I present it here in detail for scrutiny, debate, elaboration or improvements. Anyone wishing to conduct their own power testing (I know a number of touring companies that do so routinely) may find the method useful.

It in effect gives the maximum gain above the reference sensitivity that can be expected from the loudspeaker, assuming that an appropriate amplifier is used. pb 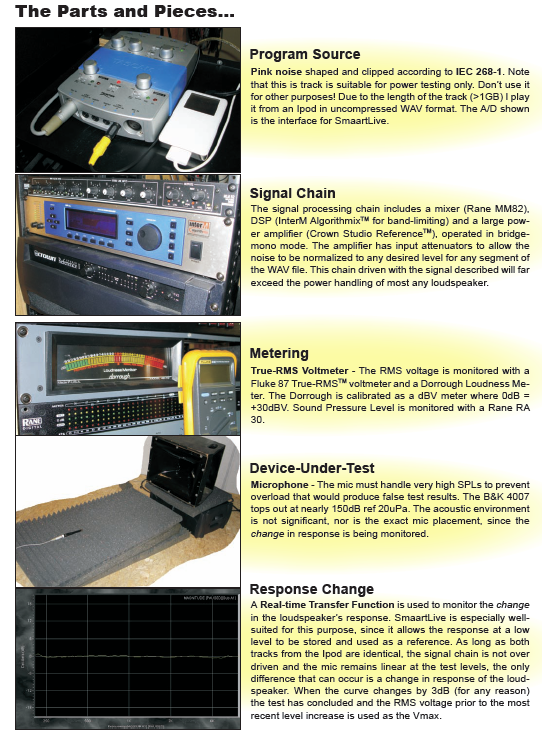