Can a room boundary be a “tool of the trade” for the audio practitioner? This study will provide some insight on how boundaries affect loudspeakers.

It’s nearly impossible to mount a loudspeaker in a room without placing it near a room boundary. Some logical questions arise:

1. Does this affect the response?

3. Can I use the boundary to my advantage?

Can a room boundary be a “tool of the trade” for the audio practitioner? This study will provide some answers to these questions, and will probably generate a few more.

Space-loading loudspeakers means that the otherwise spherical radiation is limited by a boundary or boundaries. Some common scenarios are shown in Figure 1, and are often described by the fraction of a sphere to which the radiation is confined. Since these are fractions the correct usage would be “1/n-space” but I have used the common descriptors that omit the “1/”.

The classical theory states that the effective gain realized from incoherent summing due to radiation confinement is +3dB for each additional boundary, and that +9dB relative to the free-field response can be achieved by “corner-loading” a loudspeaker. In acoustics the results are never that ideal, so part of my motivation was to determine when this or something different happens. We would certainly expect the boundary interaction be frequency-dependent, and indeed it is. This makes the answers to the boundary questions the usual “it depends.” 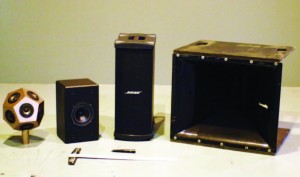 Fig 2- The devices measured from left to right: Dedecahedron loudspeaker, bookshelf loudspeaker, subwoofer, medium-format horn. The microphone and the T-square (24″) are in the foreground. The remaining photos show the device placement relative to the rigid boundaries.

The test environment is a large, open space with very rigid boundaries on three surfaces. I select a loudspeaker line-up with some devices commonly used by contractors – a bookshelf loudspeaker, a subwoofer and a medium-format horn (Figure 2). A microphone and dodecahedron were added to round out the field.

Each loudspeaker was first measured on a 12′ Genie-lift with the measurement mic in the approximate far-field (1/1- space). Next it was placed on the floor with the mic placed overhead (1/2-space). The floor-wall junction provided the 2-boundary condition (1/4-space), and the floor-wall-wall junction the 3-boundary condition (1/8-space). The mic-to-loudspeaker distance was kept the same for each placement. 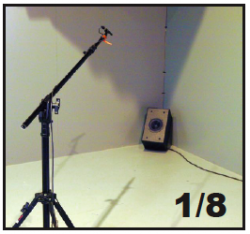 It is always both interesting and educational to compare ideal theory with actual measurements. Some of the results were as expected. Some were as expected with some interesting caveats. There were also a few surprises. The following pages present the data for each device along with some commentary. Some points-of-interest have been highlighted in the plots.

A general conclusion from the measurements is that if your objective is accurate sound reproduction with minimal coloration, it is bad news to place a loudspeaker anywhere near a boundary. The striking exceptions are that of the horn/driver and the in-wall. While I often hear horns condemned as “unmusical” or “harsh,” they are the only devices that we have that can be placed near boundaries without detrimental effects. How “musical” is a low-directivity loudspeaker whose response is dominated by severe comb filters. 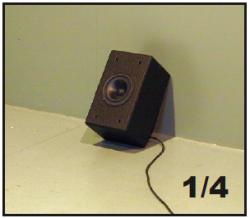 Another conclusion from the study is that equalization is generally inadequate for dealing with boundary interactions. While a “less worse” response may be achieved, far better results come from flying the loudspeaker in free space. Of course there are many applications where such colorations are acceptable, but in ones where they aren’t then free space mounting, in-wall or horn loading should be considered.

Boundary loading is often touted as being desirable for subwoofers. While some impressive gains were seen at very low frequencies, it’s not likely that the boundaries available for such placements are sufficiently large and rigid to realize these benefits. Room modes will also dominate the subwoofer response in most applications. So, the ear remains the final authority on benefits of boundary-loading subs.

An interesting sidebar to boundary loading a sub is to consider that if the sub is placed on the Genie-lift (shown above) and the mic is placed on the floor (and the mic-to loudspeaker distance is held constant), there is no increase in level as the sub is lowered toward the floor. Since listeners in an auditorium are near the floor, there may be no net increase in level if the subs are “ground planed” as opposed to flown. 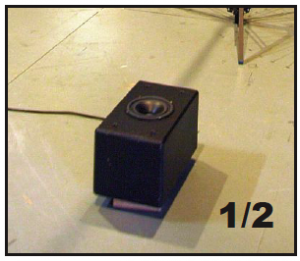 And lastly, from a loudspeaker specification point-of view, I often seen loudspeaker sensitivities measured in a free-field (correct method for most) and then increased by 6dB and specified as a “half-space sensitivity.” The data shows that this is both erroneous and misleading. A graph of the sensitivity will show any benefits or detriments. 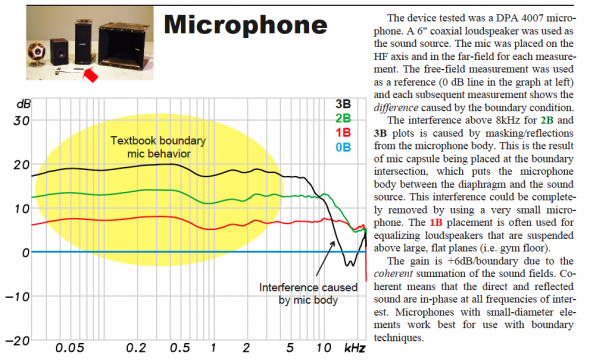 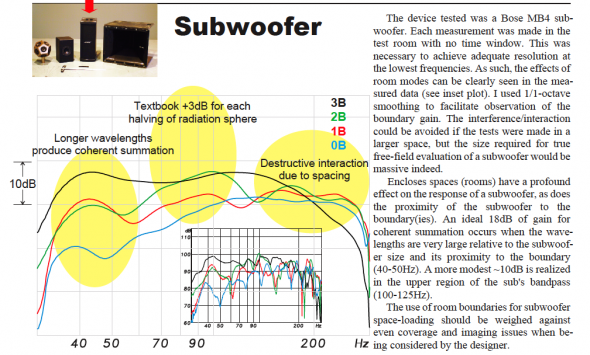 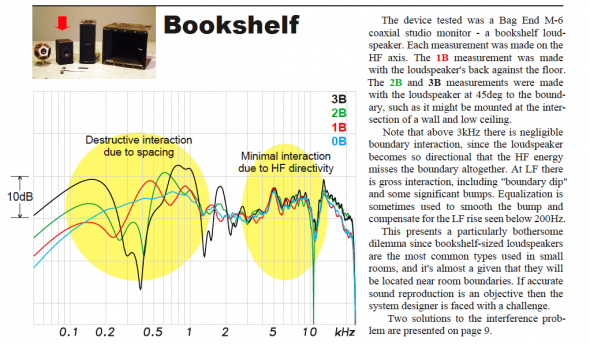 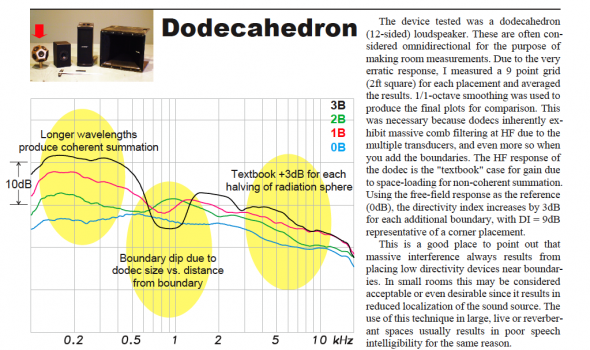 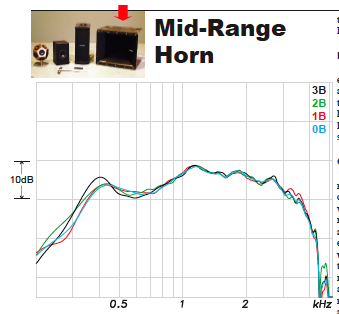 The device tested was a Community 60×40 medium-format horn with M200 mid-range driver. The size is large enough to provide pattern control through 500Hz. This device could be used stand-alone for paging, or augmented with a HF and LF for full-range applications. The horn offers some significant benefits for sound reinforcement applications, so I have devoted more space to describe the tests and benefits. The pattern control afforded by the horn prevents the sound energy from hitting the boundary. The result is almost no change in response, irregardless of the boundary condition. If this loudspeaker were equalized off-site for a flat axial frequency response magnitude, it would still be flat after the loudspeaker is installed, negating the need for additional equalization. Also, only a couple of parametric filters would be required to flatten the direct field response. Horns combine space-loading with increased efficiency. The horn acts as an acoustic transformer to increase power transfer to the air. This results in much higher levels than space-loading alone would produce.

The benefits of horn loading can be extended to other portions of the spectrum, both above and below the mid-range data shown for this device. It’s just a matter of scale. A smaller horn can be used for HF pattern control and a larger one for LF pattern control. With horns, size is everything.

Imagine the typical scenario of the need to mount a full-range loudspeaker at the ceiling/wall junction (1/4-space). The first device considered is the typical front-loaded multi-way box, selected for its “musicality” and compact size. The data shows that we can expect massive interference from interactions with the boundaries. Neither equalization nor treatment can be used to restore the free-field response of the loudspeaker. Even the popular and highly-regarded line array would have massive interference if placed near, but not in, a boundary.

Next, let’s use two of the boundary interference solutions described in this study. A large-format horn is used to extend the pattern control down to 250Hz. The device is large, so it can be recessed into the boundary if necessary (Figure 3). A coaxial, co-entrant or “synergy horn” is added to extend the response to the desired HF limit. If a subwoofer were placed at the same location it would realize some boundary size dependent space loading and a significant increase in efficiency.

This is truly a broad band solution to the problem and illustrates what was concluded at the EQ07 Workshop – equalization begins at the drawing board stage of a project. If you want smooth response you have to design for it. Failure to consider loudspeaker/boundary interactions can result in uneven frequency response, spotty coverage, poor intelligibility and over-equalized sound systems.

The bottom line? Horns are immune from boundary effects and boundary affects are one of the biggest detriments to high quality sound. pb 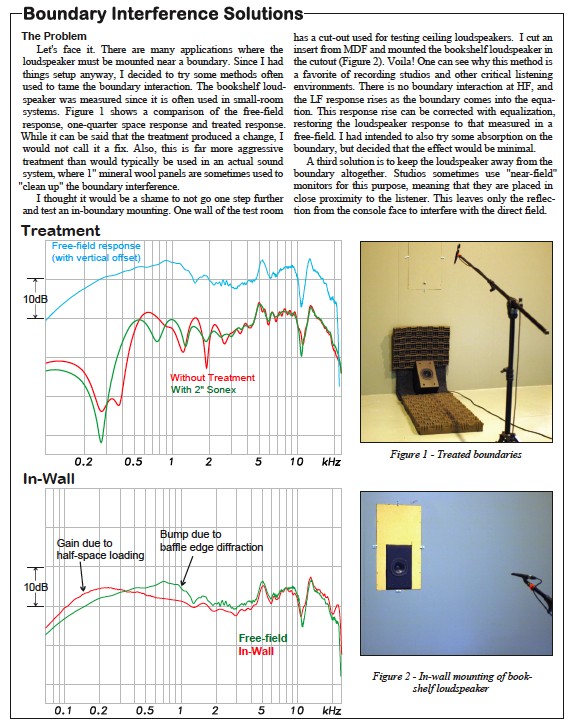