A great perk of attending a SynAudCon seminar is the AV technical tour that is often associated with the class.  It’s usually the tour that sets that class apart from others.

With our last two seminars, we had two amazing tours. Both left a lasting impression on us.

We visited the LDS Conference Center which was completed in the year 2000. This is a 21,000 seat auditorium. All seats in the audience have an unobstructed view of the pulpit because the balcony is held up by radial trusses. Behind the podium is a 7667 pipe and 130-rank Schoenstein pipe organ. They have 58 translation booths and have translated in 92 languages. It is broadcast world-wide.  Much of the technology in this facility was especially designed just for them.

A space of this size is extremely challenging. If was interesting to hear how they resolved the various problems encountered.  The acoustics of this facility are good for a room of this type, complimenting the organ and leaving plenty of challenges for the designer of the audio system.  The system worked well although it is slated for an upgrade in 2013.

We had the privilege of visiting the John F. Kennedy Center for the Performing Arts, often referred to as the “Kennedy Center.”   The Kennedy Center is located on the Potomac River near the US Capitol and many of the famous national monuments and museums. It is the busiest performing arts facility in the United States and annually hosts approximately 2000 performances for audiences totaling nearly two million.

The Kennedy Center has a total of eight performance venues. The three main theaters are the Concert Hall, Opera House and the Eisenhower Theater.  Each space had “outstanding acoustics” which makes things easier for the AV designers.  While the aesthetics were quite beautiful, the powers-that-be allowed the best sound system for the space. They understand the importance of “the experience.”

SynAudCon is grateful for those who made the tours of these world-class facilities possible. 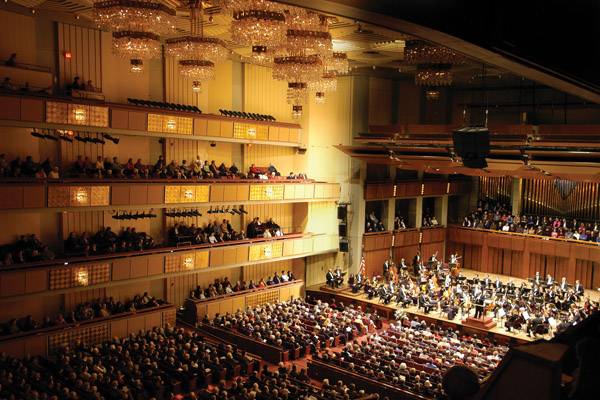 Concert Hall at the Kennedy Center