At the SynAudCon ECS Speech Intelligibility Workshop held in Dallas January 3 – 5, 2013 we had over 120 attendees, but SynAudCon only had 60 wireless IEM systems available.  Each system could drive a minimum load impedance of around 16 ohms, so if two or more listeners were to share the same IEM receiver, their earbuds would need have an impedance of roughly 32 ohms or higher.  Since the attendees were supplying their own earbuds or earphones, Pat asked me to measure the impedance of the earbuds.

I decided to use a test system which would capture the impedance over the entire audio range, and to allow the impedance curves to be stored for later use.

The report showing all the measured impedance curves can be downloaded from here:

What follows are some comments on the measurements.

A large percentage of the earbuds had almost perfectly uniform impedance versus frequency, such as shown by this Jensen earbud: 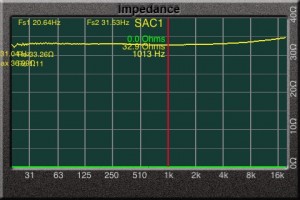 Some earbuds had rising impedance with frequency such as these Shure E4: 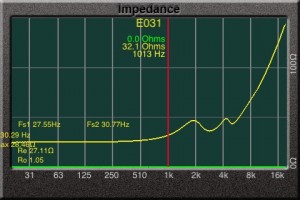 A few had multiple impedance peaks such as this JH Audio JH13: 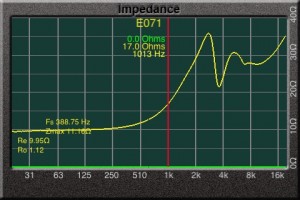 Some even had huge mid-band impedance peaks such as this Ultimate Ears Reference: 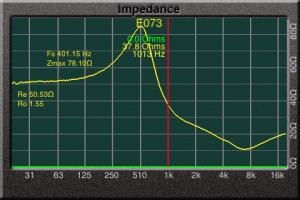 I can’t help but wonder how some of the more extreme impedance curves correlate with frequency response and subjective appraisal of the sound.