I had plans to write up an overview of the ECS Speech Intelligibility workshop.  Then I read Kirsten Nelson’s write up in Systems Contractors News.  I knew I couldn’t top that so I asked her permission to put it on our website.   Thank you Kirsten for an excellent article. Brenda Brown 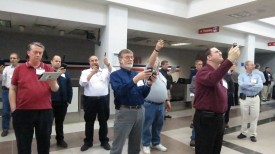 The scene was a bit surreal at first: A completely empty airport terminal right after the holiday season. Only instead of flight delay announcements, there was a strange washing-machine-like sound permeating the atmosphere, and a crowd of silent people each raising an iPad, iPod Touch, iPhone, or black box in the air.

This dream sequence was brought to you by SynAudCon, which hosted its Emergency Communication Systems (ECS) Speech Intelligibility Workshop January 3-5 at the American Airlines Training and Conference Center in Dallas, TX. The echoing and reverberant airport scene was made possible by an entirely vacant replica of Chicago’s O’Hare airport built within the confines of the facility. 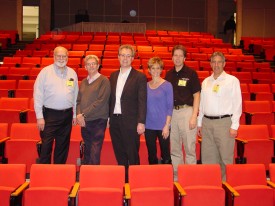 American Airlines’ training calendar was dark the first week of the new year, so a swarm of audio experts flew in from around the country to learn more about ECS, NFPA 72, STI, and other acronyms. The reason for the confluence is that the new fire code, NFPA-72, stipulates in Chapter 24 that Fire EVACS and MNS systems must produce “intelligible” announcements not just audible annunciation.

It doesn’t take another acronym, the AHJ (Authority Having Jurisdiction), to tell you that “audible” does not necessarily equate with “intelligible.” While an SPL meter may detect no noticeable difference in levels across a venue, measurements of the same audio signal may fluctuate wildly on the Speech Transmission Index (STI).

Those variables and a thirst for more knowledge brought by the universally revered SynAudCon team led by Pat and Brenda Brown were what attracted 131 eager attendees to the ECS workshop. I am not exaggerating when I say that the top levels of audio system design and product manufacturing were present for this event. One glance around the packed auditorium revealed a stunning number of famous faces with a striking pedigree. A survey of all attendees found that they each averaged 25.66 years of audio industry experience. 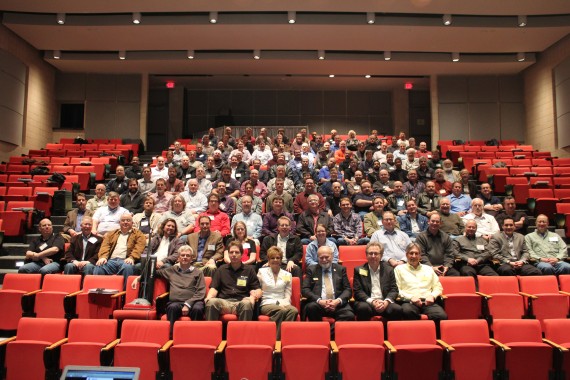 If you’ve attended a SynAudCon event, you know how the feelings of camaraderie meld with an eagerness to learn as much as possible will make a 14-hour day feel like a vacation. But the subject matter at hand was definitely intense. The measurement of STI and STIPA (the PA stands for what you think it does) is “more a science than an art,” observed Pat Brown. “Most people came into audio from a music standpoint, and if they do music systems, that’s a good entry point for speech intelligibility because they have been listening to systems.”

But they need to learn the fundamentals of acoustics before they can fully make the leap into intelligibility, which Pat feels is essential for the longevity of any sound business. “The future of pro audio is intelligibility, because you can’t buy that at Costco,” he asserted.

Seconding that notion was fellow SynAudCon trainer John Murray of Optimum System Solutions: “This is the biggest opportunity since line arrays,” because the fire alarm people are going to discover that it’s not in their expertise”, he explained, adding that over the next decade, the fire code will shift to include stricter requirements regarding intelligibility. “So people who get in on it now will benefit the most.”

“This is life safety,” he elaborated. “It’s not entertainment, it’s not PA. There are a lot more controlling figures in this field. So it’s whoever the AHJ gets to know first, that’s who they’re going to work with. The same is true with architects.” 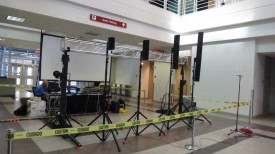 Between sessions on codes and standards, designing for speech intelligibility, and simulation techniques, coffee breaks in the adjacent simulated airport terminal offered hands-on workshops with SynAudCon-provided iOS devices or any handheld solution brought by attendees. Measurement mics were everywhere, and several sound systems were tested and measured over the three-day event utilizing apps from Embedded Acoustics and Studio Six Digital. 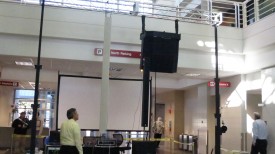 At the front of the crowd was Per Forsberg, president of Audio Architects in Chippewa Falls, WI. He was one of several attendees who were also at the first SynAudCon intelligibility workshop in 1986. “It was a seminal moment in our industry,” Forsberg recalled. “It was the beginning of the quest to correlate the subjective with empirical,” he noted, “on how to establish which information is useful and which is detrimental” with regard to intelligibility. “One hundred people came out of that workshop with calibrated ears. It will be fun to see what comes out of this event.”

There’s still some work to be done. Today’s specs require a certain STIPA score, but it can be difficult to consistently measure and prove that a system reaches that level of transmission quality. That’s where audio expertise comes in, and that may mean job security for those in our industry.

As more in the audio industry become familiar with STI measurement, the data and techniques are being employed in system design and other applications. “You can use STIPA for a variety of applications, not just voice alarm work,” said SynAudCon trainer Peter Mapp of Peter Mapp Associates, who outlined applications in transportation tunnels, cathedrals, concert halls, airport terminals.

In addition to his teaching duties, Mapp also served as representative for the Institute of Acoustics, which presented Pat Brown with the 2012 Peter Barnet Award. When Mapp handed the trophy and plaque to Pat, the immediate response from the crowd was a heartfelt standing ovation that lasted longer than the modest educator cared for-but the audience clearly and intelligibly wanted to show its appreciation for what Pat and Brenda Brown have done to extend the legacy of SynAudCon and its founders Don and Carolyn Davis.

It doesn’t take a measurement mic to gauge the resounding legacy of all of these teachers and trainers. But here’s hoping the sound of new business will be music to attendees’ ears. 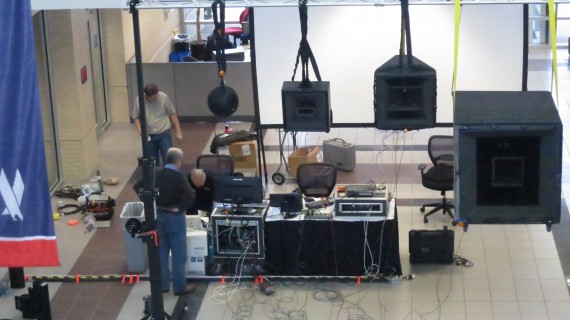 Setting up for the demonstrations for the event. 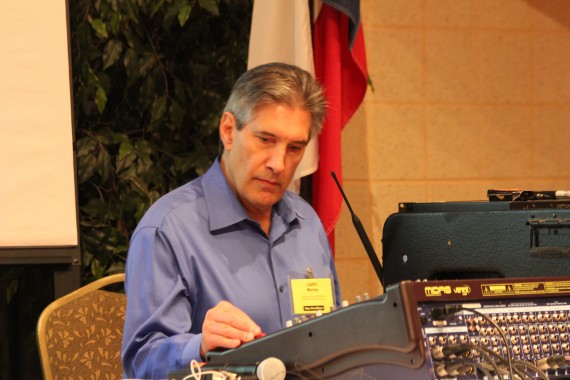 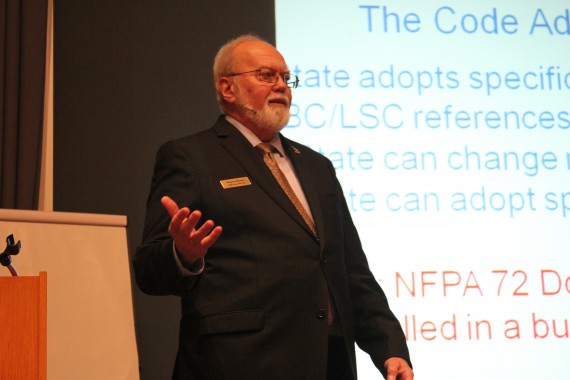 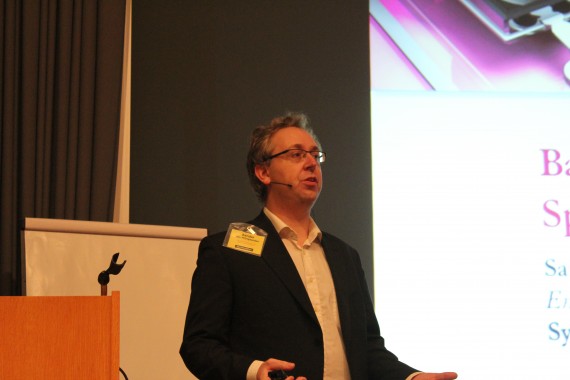 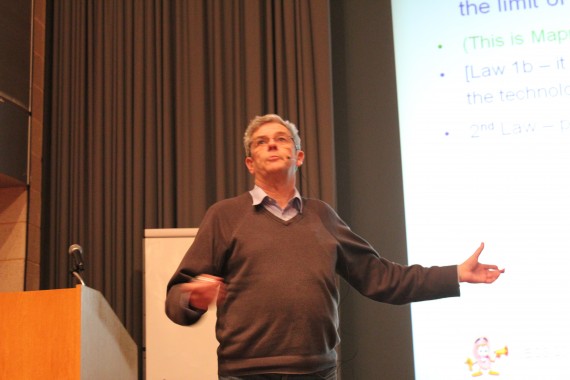 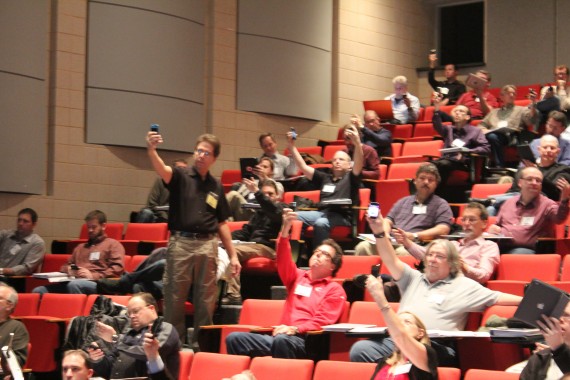 The 30 minute breaks were called "Active Breaks". Demonstrations took place during this time. 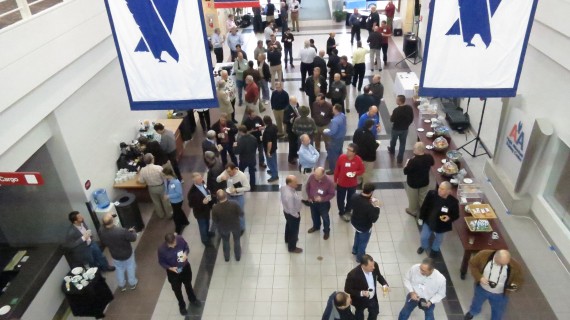 Ariel view of the breaks. 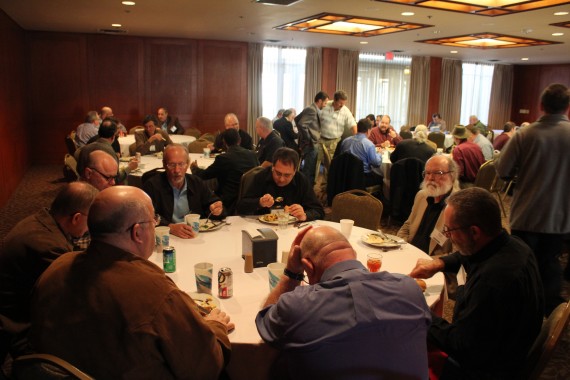 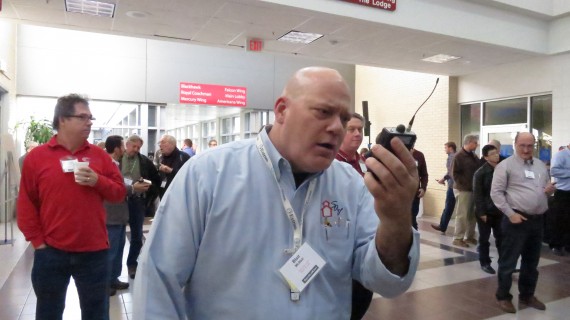 Class clown, Blair McNair, trying to measure the STIPA with our listening receiver. 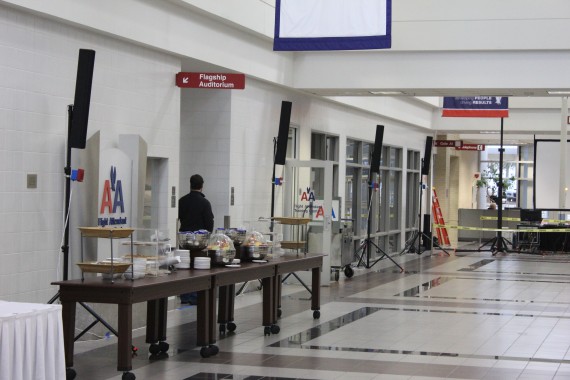 Twenty different types of loudspeaker devices/systems were demonstated during the breaks. 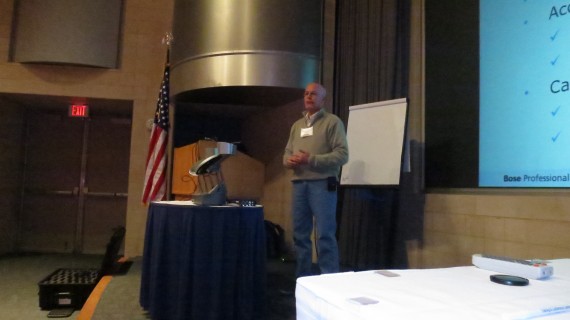 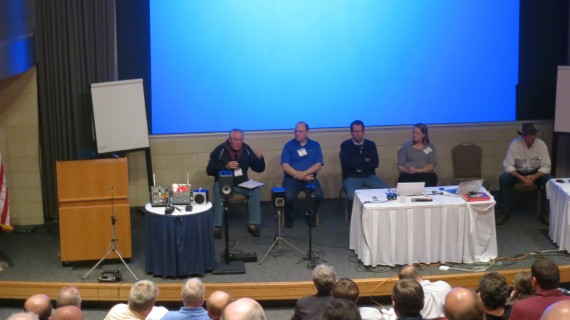 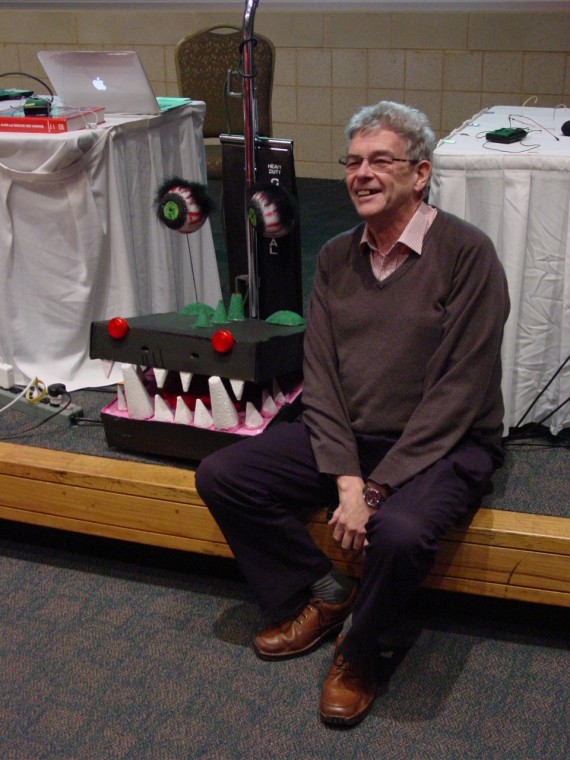 A few laughs kept the workshop fun and motivating.