SynAudCon feels honor to be mentioned in Peter’s acceptance speech. Don Davis reflects on one of Peter’s early papers.

Peter D’Antonio is an interesting combination of artist and scientist – music and mathematics. Peter gave a paper at an AES Convention in the early 80s in Nashville, TN. Carolyn and I were standing in the hall after Peter finished his paper – which was very complex.  There was an editor of an audio magazine walking out of Peter’s paper, who made the comment – “what a waste.  There aren’t 2 people in there that understood what he was talking about,” to which Carolyn said, “maybe, but those two people will go forward with that information and change the industry.” And so it happened.  The first installation of Peter’s QRDs was in the Oak Ridge Boys recording studio in Nashville by Robert Todrank, also of Nashville.  dd

The RPG Diffusor resulted from a desire I had to scatter rather than absorb the reflected sound from the rear wall of a Live-End-Dead-End control room in my basement recording studio, called Underground Sound, in the late 1970’s. I was intrigued with the possibility of using diffusing surfaces based on mathematical number theory, initially developed by Carl Friedrich Gauss in the 18th century and later suggested by Manfred Schroeder in 1975, to improve concert hall acoustics.

To my surprise, these periodic surfaces were 2-dimensional versions of the 3-dimensional periodic crystal lattices I was studying as a diffraction physicist at the Naval Research Lab, using x-ray crystallography. These surfaces are called reflection phase gratings, hence the acronym RPG. So these surfaces were very familiar to me, only the wavelength was different.
I’d like to thank several organizations for providing a forum for me to share my research with the music industry. These included the Audio Engineering Society, Synergetic Audio Concepts, and the staff of Mix Magazine in the early 1980s.

The RPG Diffusor and the Reflection Free Zone control room design were enthusiastically adopted by the studio design community and became a de facto standard in countless studios around the world to this day. So thanks are also due to the creative studio designers I collaborated with over the years. I believe all are TEC Award winners. Some are here today along with my son, who was one of the first RPG employees.

I want to also thank Dr. John Konnert, co-founder of RPG, Professor Trevor Cox, co-author of my reference acoustical text book and Manfred Schroeder, my inspiration and the spark that ignited my passion for acoustics.

This year RPG is celebrating its 30th Anniversary and this prestigious award puts the icing on the cake. 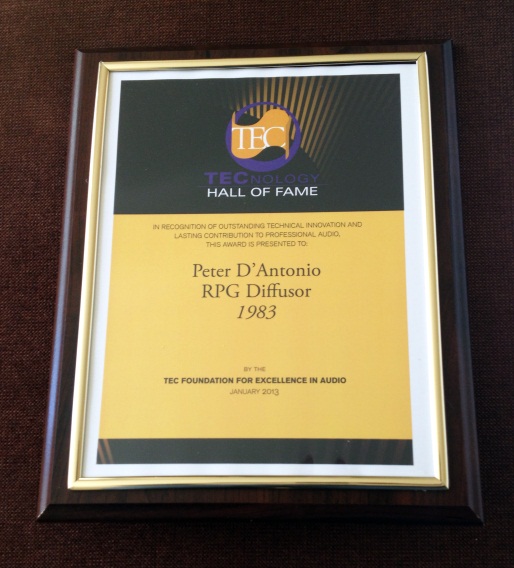