Peter Mapp presented the award to Pat at the ECS Speech Intelligbility Workshop. The immediate response from the crowd was a heartfelt standing ovation that lasted longer than the modest educator cared for-but the audience clearly and intelligibly wanted to show its appreciation for what Pat and Brenda Brown have done to extend the legacy of SynAudCon and its founders Don and Carolyn Davis. 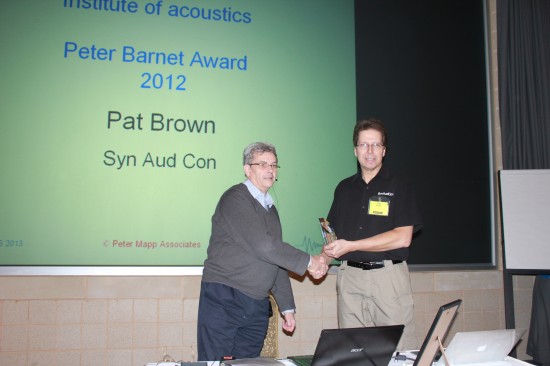 Presentation Speech given by Institute of Acoustics

It gives me great pleasure as a representative of the Institute of Acoustics Electro-acoustics Group to be able to honour Pat Brown for his ongoing remarkable contributions to the welfare of Reproduced Sound.

Pat Brown’s contribution to electro-acoustics is measured by his gut level and study-enhanced understanding of audio and his remarkable teaching skills.  He has an almost unmatchable ability to present highly technical information in a form in which the highly knowledgeable learn something and don’t complain about being talked down to, and where at the same time, those with less experience learn even more.  And these two types of student learn together in the same room, sharing their experiences and gaining respect for each other’s roles in the delivery of audio excellence.

Pat’s life in audio started as a guitarist in high school, where he also mixed live audio for bands.  After that he went to University of Louisville and completed a degree in Electrical Engineering Technology.  For the nine years following, Pat was manager in a retail music store, before becoming more directly involved in audio professionally as a mix engineer, system designer and contractor.  He built up part of his knowledge by attending Synergetic Audio Concepts (SynAudCon) classes led by Don Davis, where his quick understanding and ability to communicate what he learned to others was recognised by Don.  His teaching skills became evident to a larger audience in the early 1990’s when Don asked Pat to assist him in delivering Syn-Aud-Con courses in Europe, which is where I first heard and was impressed by him.  In 1996 Don and Carolyn Davis decided to retire and by Don’s wishes, Pat and his wife Brenda took over the SynAudCon business.

Pat and Brenda have continued to develop SynAudCon.  Up toward the highest achieving designers in the business and down towards the installers and operators of audio systems.  In my view, this is the most successful attempt so far to bring the whole of the sound industry under the influence of knowledge and helps to build personal relationships among those do the work in the industry.  Without this special contribution, one part or another of the process of creating and reproducing sound fails, rendering everything in the system useless.  With it, it becomes possible to deliver a system design that integrates room acoustics, sound insulation, sound system design, correct installation, proper commissioning and tuning and successful / meaningful sound operations.  The final result is enjoyable sound for the listener that contains much more of the detail from the original sound source.  Thus speech is more intelligible and musical details more audible.  One day perhaps even the show producers and musicians may enter this chain and bring further improvement!

In addition to running the training business, Pat also sometimes undertakes commissions as a sound system designer and in debugging, problem solving and system tuning for systems designed by others.

But could Pat do this without Brenda? Could Don have done it without Carolyn?  These seem to be true partnerships, synergetic in themselves, perhaps models for the idea that when you put different ideas, know-how and people together into a team – they can actually create something new and better.

Pat and Brenda are making the most significant contribution to training in the world of audio today, or indeed during any part of my career since I started in the business in 1971.  Without Don and Carolyn, this never would have started.  But Pat and Brenda have expanded and developed it in new ways, resulting in even more audio systems that work following installation and more knowledgeable operators that understand the how to get the best out of them.

For his outstanding contribution to the transmission of knowledge about Reproduced Sound to the widest audience, the Institute of Acoustics is proud to award the Peter Barnett Award for 2012 to Pat Brown.

First please accept my regrets for not being here in person. Health issues don’t ask permission to invade our lives. I actually made it to the airport before deciding that it was unwise to board an international flight while feeling worse hour-by-hour. It was our first event cancellation in 17 years of teaching. Anyway, my gallbladder will be removed soon.

It is an honor to be considered for this award, and an even greater honor to receive it. I haven’t invented anything new over my audio career. What I have tried to do is take essential audio practices, streamline them, and help incorporate them into the workflow of the general audio practitioner.

When I began my audio career in the early 1980’s, I considered myself knowledgeable, and I actually was – compared to many of my peers. I had many successful projects, and knew all of the model numbers and buzzwords. I then attended my first SynAudCon seminar, and quickly realized that I was measuring myself by the wrong standard. What a wake-up call! I left realizing that I didn’t really know anything, and that I would have to start over and learn audio from the ground up. Don and Carolyn Davis changed my life by demonstrating the right way to do things, and serving as an example of building on the proper foundation, be it audio or life in general. For that I am forever grateful.

I would also like to thank my wife, Brenda, for putting up with my audio nonsense throughout the years. She left a successful career as a nurse to run SynAudCon, which enabled me to teach, write and play with audio toys. Together we have made a pretty good go of it, as we have been blessed to work in a field that we enjoy, genuinely welcoming the challenges that we face each day of running a small business in the “Walmart era.” The best part of SynAudCon for us has been meeting people like you – people that love their work and have excelled at doing it.

Times have changed since our humble beginnings. The political and economic pressures of today’s world, combined with a changing dynamic of how business in general is conducted, have produced an environment where there seems to be diminished interest for newcomers to our field to dig deep into the complexities and subtleties of audio. The technical practitioner has been forced to become broad, at the expense of becoming deep – a dodec as compared to a high-Q pattern control horn. Intelligence hasn’t diminished, it just has to be applied to many more topics.

In light of this our mission at SynAudCon remains the same. We must continue to refine audio procedures and practices to be both efficient and effective. In addition we must inspire the next generation of audio practitioners to have the same curiosity and zeal possessed by all in this room. All of us would like to begin our careers anew, armed with the tools available today. But, those tools are the result of our toil, and we have learned much on the journey.

Thank you again for this honor.  It shall serve as a reminder that Brenda and I have like-minded friends and colleagues that support us in our work.