In this article Cory Schaeffer recaps the 2010 ADA changes as it relates to the requirements around assistive listening in projects. 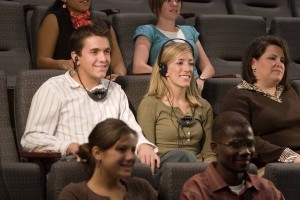 Navigating through the Americans with Disabilities Act’s (ADA) most recent changes to the assistive listening section can prove to be a challenge. To be clear, these changes affect every project being done today and beyond if the AV System is being upgraded or added into projects. Let’s recap the changes as it relates to the requirements around assistive listening in projects.

The ADA Act was last updated on September 2010 with changes that affect assistive listening in AV projects. It’s important that our industry stay current on this change as there are a growing number of advocates raising awareness on these new changes. The ADA did allow for phased compliance with the various changes to the requirements from September 2010 to March of 2012. However, as of March 15, 2012, the ADA standard for assistive listening must all meet the recent revised standard.

Summary of the ALS changes in 2010

It is left to the Department of Justice (DOJ) to enforce the ADA Standards, which it does under five separate categories. The three largest are Title I – Employment practices by units of state and local government, Title II – Programs, services and activities of state and local government and Title III – Public accommodations and commercial facilities. Generally we are seeing enforcement coming from the State DOJ level; however, there have been some federal enforcement initiatives as well.

The Intent of ADA, Title III is essentially to get owners of public facilities to remove barriers and provide people with disabilities accommodations equal to or similar to that available to the general public.

There are no ADA police that are specifically responsible for finding violators. Some may think this is a good thing, as it turns out for businesses and building owners this may not be good at all. ADA enforcement is being handled solely through a complaint response system. This means that anyone can complain about a noncompliance issue and the wheels of Government begin to turn. Around the country we are seeing disability groups organizing and targeting specific businesses or types of businesses relative to equal access. Letting the venue know about the risks upfront will save everyone a lot of grief after the AV project is installed.

Excerpts from the section of the new ADA requirements relating to assistive listening:

219.1 General. Assistive listening systems shall be provided in accordance with 219 and shall comply with 706.

219.2 Required Systems. In each assembly area where audible communication is integral to the use of the space, an assistive listening system shall be provided.

EXCEPTION: Other than in courtrooms, assistive listening systems shall not be required where audio amplification is not provided.

2. Where all seats in an assembly area are served by an induction loop assistive listening system, the minimum number of receivers required by Table 219.3 to be hearing-aid compatible shall not be required to be provided.