Pat Brown gives an “audio guy” perspective on running Windows 10 on a Mac.

A SynAudCon member recently contacted me about advice on running Windows 10™ on his new Mac, which I have been doing for several years. This can be a daunting experience at first, and much can be learned from the experiences of others who have already made the journey. There is a lot of information on the web about running multiple operating systems. I thought our members might appreciate an “audio guy” perspective.

Like many, you live in a Windows world but you like Apple’s notebooks. They represent some of the best hardware available today. Windows hardware can be a “race to the bottom” regarding quality, with the objective of being the cheapest thing at Best Buy. There are exceptions. Macs generally cost more but you get a metal body, good overall construction, and a local Apple store for support. Apple recognizes that many users need to run Windows, so they designed a hardware architecture that supports it, and provide a free utility, Boot Camp, to allow it. When I look out across the room in our seminars, I see a lot of Mac notebooks, even though pro audio is (mostly) a Windows world.

You may decide to buy a Mac to run Windows, but after playing on the OSX side a bit you find that there are some things that it does really, really well. You make the fateful decision to run both operating systems. That’s pretty much the case for me. My Macbook started out as a Win10-only PC, but I eventually decided that I should utilize the OSX side too. After all, that’s what the hardware was designed to run.

For starters, you need to think about what you will do on each OS. This will influence how you install Windows on the Mac.  You will either run Windows natively on the Mac hardware using Boot Camp, or you will run Windows in virtualization on top of the Mac’s OSX operating system. Let’s look at both.

You bought a Mac notebook because you wanted the experience of leaving the Apple store feeling like a new parent leaving the maternity ward. But, you just want it to be a Win10 notebook. The hands-down solution is to use Boot Camp to run Win10. Boot Camp is a utility that comes with OSX that allows it to run Windows natively, meaning that you will boot the computer into Win10 and ignore OSX. I’ll refer to this as Win10 (Boot Camp). When you boot into Win10, the OSX side is basically dormant. But, it is still there if you choose to boot into it for upgrades, housekeeping, etc. There are numerous resources on the web for how to acquire and install Win10 under Boot Camp. With Boot Camp you have a Mac or a Windows PC, but you have to choose one or the other when you boot.

Figure 1 – Boot Camp allows your Mac to run OSX or Windows 10. You decide when you boot the PC.

You bought a Mac to run both OSX and Win10 simultaneously. You will boot into OSX and run Win10 in virtualization. Most use either VMWare Fusion™ or Parallels™. These are both paid applications. There is also an open-source alternative – VirtualBox™. I use VMWare. I have not used Parallels or VirtualBox. My decision was based largely on what other audio people were doing. My investigations seemed to point to a preference for VMWare, but it and Parallels seem to be pretty equal in the final evaluation. VirtualBox is more of a wild west approach. It can work but with less refinement than the paid programs. I’ll stick with VMWare Fusion in this article and refer to this approach as Win10 (VMWare).

Figure 2 – Virtualization allows your Mac to run Windows 10 on top of OSX, sharing the computer’s resources between the two.

Why Both Operating Systems?

A Mac is a good Win10 PC, but not a great one. If your Mac has a Retina display, you will not experience its full potential on a notebook PC running Win10. This may not always be true, but it is as of this writing. Once you have experienced the Retina on a Mac, it will be difficult to ignore it and commit to a scaled, pix-elated Windows display. Also, there are some quirks regarding fan speed and processor utilization that can be annoying (Why is my fan running full speed so often?). You have to jump through some hoops to get the track pad to work like a Mac (scrolling direction, gestures, etc.).

The biggest downside to booting into Win10 is that your Mac is not a Mac, and OSX is a much cleaner OS overall than Win10 (my opinion). Although Win10 is trying to be more like OSX, it isn’t there yet. It’s hard to completely ignore the OS that the Mac was designed to run, and one you try it, it is hard to go back.

Win10 (VMWare) works well, but it is not perfect. Windows sometimes does not like going through another layer of software to talk to hardware. There can be problems with hardware peripherals and USB drivers.  There is no Firewire support in VMWare. Dante Virtual Sound Card™ will not work under VMWare. Period.

I have several essential hardware devices that will not work in Win10 (VMWare). Some processes will take a performance hit, such as doing a ray tracing in an acoustics modeling program using multiple processor threads. The log sweeps that we use for measurements can have pops and clicks under Win10 (VMWare). ASIO sound card drivers can be especially problematic. In short, some heavy duty pro audio stuff has issues under VMWare.

If you are having problems with a Windows program running in VMWare, don’t be surprised if you call tech support and are told “We don’t support virtualization.” This is why having a Win10 (Boot Camp) install is important, even if you run Win10 (VMWare). It allows you to troubleshoot.

Another limitation of virtualization is that USB peripherals cannot work in both OSX and Win10 (VMWare) simultaneously. When you connect a peripheral you get a dialog asking you to choose which OS to connect it to.  You can change your mind at any time, and you can select a default OS so that you aren’t prompted each time you connect the device.

You Can Have Both!

I selected to have it both ways. I first installed Win10 on my Macbook under VMWare. I then installed it under Boot Camp. You can use the same Windows 10 disc or ISO for both. So, I can run Win10 natively and I can run it under virtualization, depending on what I need to do.

With any OS, you will produce data files that you need to store. These are the text files, graphics, measurements, and other data that you bought the computer to produce. I use Dropbox™ for my data, which allows me to share the same data (not programs) between OSX, Win10 (VMWare), and Win10 (Boot Camp). It works great. So, if I do a measurement session in Win10 (Boot Camp), the data is there when I reboot into OSX and run Win10 (VMWare). This is because Dropbox keeps a local copy of the files on the PC, but uploads a copy to the cloud. So, once I am sure that the cloud copy is up to date under Win10 (Boot Camp) I can reboot into OSX and let Dropbox automatically update the files from the cloud. 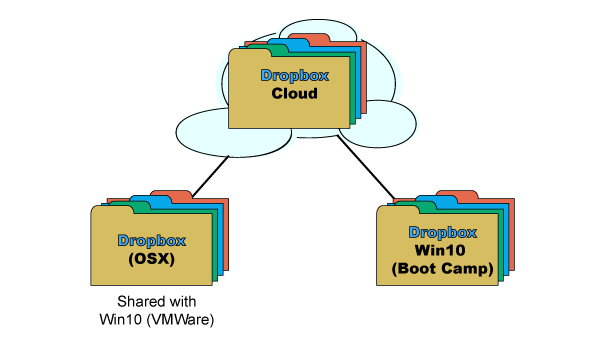 As for me, I use OSX and Win10 (VMWare) for most of my day-to-day computing, presentations, training, video production, etc. I work around the VMWare shortcomings, and capitalize on the stability and fluidity of OSX. I can be working in OSX to produce a training video, and instantly jump into Win10 to grab a screen capture or process some data files. Presentations work especially well on the OSX side, as navigation, scrolling, and zooming are its strengths. DSP control, CAD, and measurement post-processing are done on the Win10 (VMWare side). I am in Apple’s walled garden and not wandering in Microsoft’s Serengeti.

When doing field work (mostly measurements) and processor intensive simulations (e.g.ray tracing for detailed auralizations), I use Win10 (Boot Camp). Now all of my drivers, etc. work without issues and the processor can be fully utilized by Windows. It’s a Win10 PC until I reboot into OSX.

Here is a list of my programs/processes that require a native Windows 10 (Boot Camp) environment. It’s a short list, but these are must-haves, at least for me. Please comment below if you can add to the list.

So, by using Boot Camp I have 100% Win10 functionality. A downside is that I have to maintain two Win10 installations, the one under VMWare and the one under Boot Camp. Your Windows programs must be installed separately on both, which can affect licenses, etc. For example, if a software program allows three installations (total) the hybrid approach of having Win10 (VMWare) and Win10 (Boot Camp) on the same PC will require two of them, even though it is the same computer.

What you do on each OS is a personal decision. Many computing tasks (email, web browsing, photo editing, etc.) can be accomplished in one form or another on OSX and Windows. Since you are running both operating systems, just pick the one you like. With virtualization you can switch between OSX and Windows with a swipe of the track pad.

You will develop your own preferences and workflow over time, and it will be different than that of your peers. Once you get things working, stick with it unless you have a good reason to change. Otherwise you will be spending too much time tinkering and too little time working.