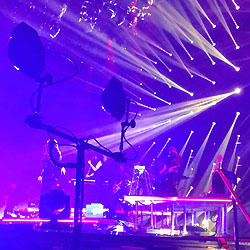 It’s 9 am and I’ve just tumbled off the bus into today’s venue, a.k.a., “The Naming Rights Arena,” another stop on the five-month, 59-city Rock This Country tour by Shania Twain that I’m working with VER Tour Sound.

The first hour is spent helping the rest of the audio crew as we tip the first of two trailers (mostly PA). About an hour later, the second trailer is empty as well, and I’m able get to focus on my “real” job as RF technician for the tour, which usually runs 56 channels of wireless systems on each show. (At one stop we had 89 channels running.)

First thing, I set up my scanner, an Invisible Waves IWx RF Command Center. I generally begin by taking a 200 MHz wide scan from 500 MHz to 700 MHz, as I’ve been finding that the bandwidth below 500 MHz is usually out of bounds in the U.S. This is due to those frequencies being re-allocated to public safety in many cities.

The first pass is often an early indication of what kind of day I’m going to have – if there are relatively few DTV channels and a low noise floor, things are going to be pretty straight forward (Figure 1). If not (Figure 2), read on… 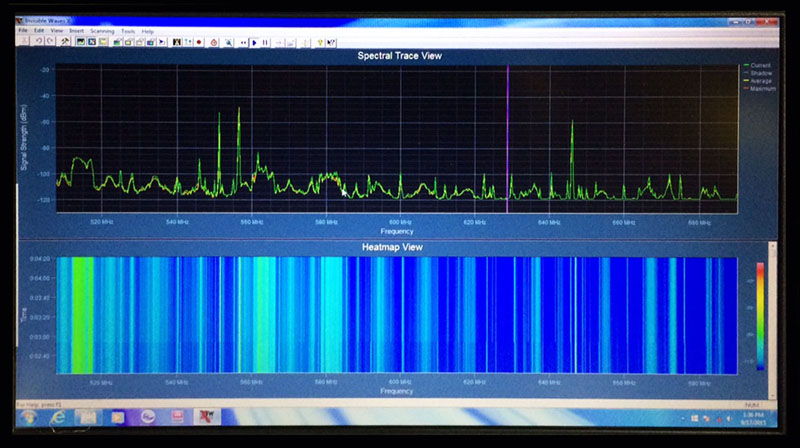 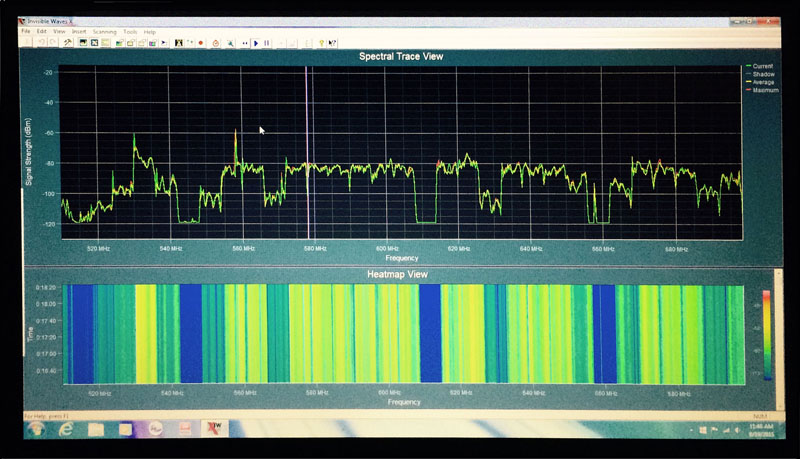 Once the scan has run for at least five minutes (it lays down more detail on successive passes), I save it as a .csv file that is then imported into Intermodulation Analysis System (IAS), the frequency coordination program from Professional Wireless Systems that I’ve used since 2008.

Whenever possible (i.e., when there’s an Internet connection available), I also upload my scan to the IAS database so that other users can access it.

About 90 percent of the time, the scan will have nothing but the local DTV channels that are present in the arena, but occasionally there will be a few other carriers present as well, typically the house intercom base station frequencies.

For the most part I’ve decided to work around these, for three reasons:

At this point I usually wander down to catering for breakfast and work on my coordination with the newly acquired scan data. This coordination is already “roughed in” the night before, but I’ve found that a scan on show day is really needed to finish it, usually because I uncover at least one more DTV channel than was listed in the database.

Coordination done, it’s time to head back down to the arena floor (at this point the stage has been built but is still out in the middle of the floor). I temporarily park my RF rack next to the stage left PA distro, power it up and program any frequency changes into the eight Sennheiser EM3732-II receivers and seven SKM2000 IEM transmitters.

I then sync or manually program the corresponding mics and beltpacks. (We’re using the 2000 Series beltpacks into the 3732 receivers for band vocals, and that combination won’t sync). If there are changes needed in the Telex BTR intercom system, I also power up that rack and make those changes.

Once everything has been programmed, including redundant spares, the racks are unplugged and rolled into position opposite where they’ll go when the stage is moved into place.

By this point, the stage has been pre-wired, and everything else that can be done is done. Time for lunch.

By 1:30 pm, the stage has been rolled into place and a flurry of activity is underway, with the RF, monitor, patch, Pro Tools and backline rigs being placed either under or adjacent to the stage. 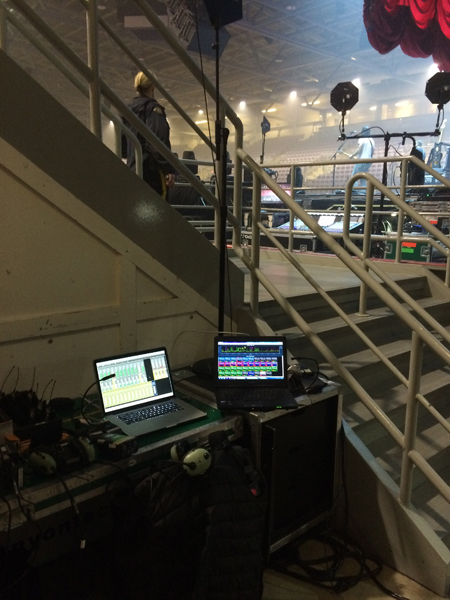 The author’s workstation, with antennas in the air.

First, I erect my two antenna stands, each with two Sennheiser A 5000-CP (circular polarization) passive antennas for both TX and Rx, and a Sennheiser A 2003 passive directional antenna for the intercoms.

After that, it’s time to set up my “office,” consisting of a small work trunk and a table to host two laptops. At this point, I enter any new frequencies into the monitoring panel in the Command Center’s IWx program. (I also use Sennheiser WSM for monitoring.)

Next on the “to do” list is a visit to stage left and right backline positions to program any changes into the Sennheiser 2000 Series systems (collectively, nine frequencies between the two systems). I also collect the IEM packs from the backline techs and re-sync them if I’ve made changes to their frequencies.

Then it’s off to front of house to program the four Shure UHF-R systems that system tech Kenny Sellars uses to tune the house system. If possible, I try to get out of the arena while the PA tuning is happening… When that’s done, I walk Shania’s IEM pack around the stage to make sure it’s clean (interference free), and then with the two packs that I wear (in Engineer mode), check out the band and backline mixes.

Finally, the band’s DPA 4088 headset microphones are hooked to their respective belt packs, and I’m ready for line check at 4 pm. At 50-plus shows into the tour, line check is usually routine, but occasionally there’s a gremlin to sort out.

The band takes the stage at 5 pm for sound check, playing a song or two before being joined by “The Boss” as we call her (except in New Jersey) to run through a song. Once she takes the stage, I dial in her mix and walk clockwise around the arena floor as a “confidence check” for later when she’s wheeled around the floor perimeter during the song “Any Man.” Most days, monitor tech Carter Hassebroek joins me to walk her back-up pack. On the way back around the stage, I check in with all four of the backline techs to make sure they and their respective band members are happy.

With sound check out of the way, attention turns to getting the opening act, Gavin DeGraw, on stage. I also coordinate RF for the opening act. This is done, along with the work on the systems used for tuning the PA, because I strongly believe that top-quality coordination must include all RF devices that are used for the show. I also prefer not to turn off any of my gear once it’s been turned on.

Next I check out the wireless intercom systems, a four-up BTR-800 and a five-up Clear-Com Tempest 900. Intercom in this show is mission critical, as the packs are worn by the guys in the automation department who are responsible for all of the moving risers, trusses and elevator. If they yell “Stop!” for any reason, everyone had better be able to hear that call.

From 6 to 7 pm – dinner! (Did I mention that the Dega catering is fabulous on this gig?) After changing into my “show blacks,” I’m back at the stage by 7:30 pm, where the opening act is readying to go on. The headliner’s band beltpacks (12 in total, six mic and six IEM) all get fresh batteries and are then walked to the dressing room. (The backline people take care of their own instrument packs.)

When I get back to the stage, Shania’s three Sennheiser SKM5200 transmitters get new batteries, with intercom pack batteries checked/changed as well. The rest of my time goes to double- and triple-checking everything and following along with line check after the changeover from opening act to headliner. About five minutes before show time comes a final check of the band’s wireless packs, which I do at stage left and right backline positions.

As the show kicks off, I dial in Shania’s main IEM mix and follow along for the first song, “Rock This Country.” For the second song, I repeat the walk around the arena floor, where I’m always blown away by the crowd’s reaction at seeing her on stage. (They absolutely love her!)  Check in with the backline guys again, thumbs up all around, and then head back to my station at stage left where I page through the rest of the in-ear mixes.

With everyone happy and my RF world stable, I’m a content guy. I typically dial in the backline mix for the rest of the show and settle down to start working on the coordination for the next day’s show…

Ike Zimbel has worked in pro audio for 35-plus years, and during that time he has served as a wireless technician and coordinator, live engineer, studio technician, audio supervisor for TV broadcasts, and has also managed manufacturing and production companies. He runs Zimbel Audio Productions in Toronto, specializing in wireless frequency coordination and equipment repair/modifications.