Sound Waves, Loudspeakers and the Laws of Physics

Whether you like it or not, sound waves will always radiate spherically from a sound source (such as a loudspeaker). Don’t believe me? Try throwing a rectangular brick into a pond. Do you think the larger ripples will resolve into rectangles or circles?

Audiovisual professionals have long used rectangular shaped horns as the go-to option for many spaces because they were believed to be efficient at directing high-frequency sound in straight lines to cover the audience areas. Unfortunately, sound waves have a tendency to misbehave (you can thank the laws of physics for that!)

While it’s true that typical rectangular horns can deliver some useful pattern control at higher frequencies (ie 4-8kHz) where the horn width times height is larger than the wavelengths that they are “guiding”, issues arise at lower frequencies where the horn width times height may be smaller than the wavelengths they are attempting to guide (ie 1-2kHz). Furthermore, when the height of the horn is really short, you’ll see the vertical coverage pattern of certain frequencies collapse earlier than the horizontal coverage pattern, and something called ‘pattern flip’ occurs. 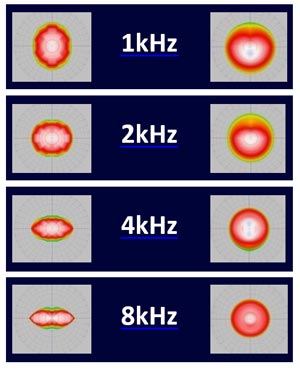 Physics tells us that the coverage patterns for woofers and horns are influenced by both their size and shape, respective to wavelength, and at shorter wavelengths a woofer’s coverage will always narrow (this is referred to as ‘beaming’). A conventional rectangular horn typically has a nominal pattern of 90 degrees horizontally by 50° vertically, while a 12” or 15” woofer will exhibit beaming at the crossover which results in a conical coverage pattern of 75-90°.

The byproduct of trying to blend these disparate coverage patterns is something called off-axis coloration. For those folks sitting off-axis they will hear a frequency response that is VERY different to those folks sitting on-axis. Furthermore this on-axis vs off-axis disparity cannot be corrected with EQ – it is inherent in the loudspeaker design!

QSC’s guiding design principle for loudspeakers is called Directivity Matched Transition™ (DMT), which leverages the principles of physics (rather than fighting against them) by selecting the optimal crossover point for a desired HF driver, then mounting that HF driver onto a horn with a geometry and coverage pattern that perfectly matches the woofer’s coverage pattern at the same crossover point.