What is a Digital Audio Cable?

The audio interface provides the means of getting the signal from one component to the next. It includes the source (output) circuit, the cable, and the load (input) circuit. There are consumer (2-wire, unbalanced) and professional (3-wire, balanced) versions, the major difference being robustness against electromagnetic interference in its various forms (Fig. 1). Does a digital audio interface require a digital audio cable? 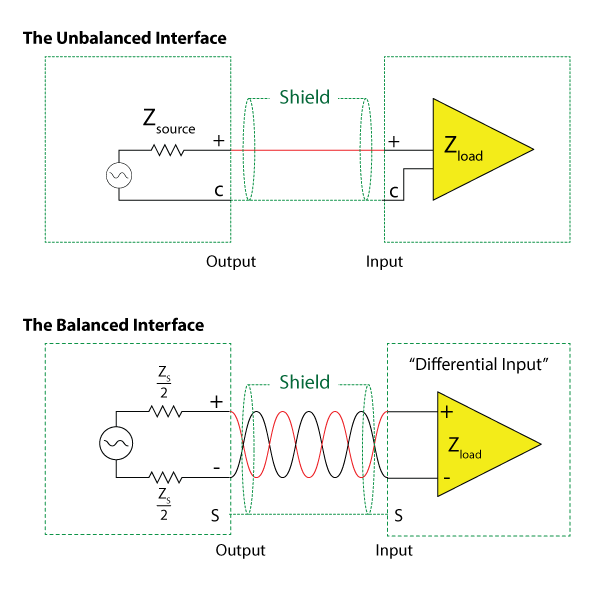 Do balanced analog and digital interfaces require different cables? I will first lay some groundwork.

An analog interface passes the signal as a time-varying voltage, the shape of which must be preserved by the interface, which includes the cable (Fig. 2). Assuming that the input and output circuits are good designs, that leaves the cable as a source of signal degradation. Cables have electrical properties, and capacitance tends to be the major one that can affect signal quality. Cable capacitance is a property that shorts out the signal with increasing frequency, resulting in a loss of the signal’s high frequency content. While that sounds devastating, audio interfaces for both consumer and professional products are designed to push the effects of cable capacitance beyond the audible frequency range.

If you use decent cables and keep them to a practical length, your audio should not be affected. But, the cable effect is not zero, and there is no consensus on the high frequency limits of human hearing. This opens the door to claims that “special” cables are needed to preserve the fidelity of the analog signal. 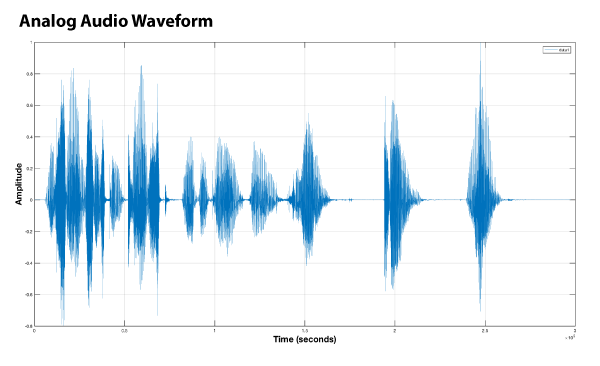 Figure 2 – An analog audio waveform has a complex shape that must be preserved by the interface.

The digital signal consists of packets of data that are streamed down the cable and recovered at the load (input). The AES3 digital format consists of two channels of audio data traveling one-way on a STP cable. As with a balanced analog interface, the cable shield serves only as a shield and is not required for passing the signal between source and load.

While the analog signal can take on a unique value at any specific instant in time, there are only two states for the digital signal. A “bit” is either a zero or it’s a one. The objective is to preserve this distinction at the digital input. Cable capacitance still exists, and can reshape the signal by rounding the transitions between the bits (Fig. 3).

Figure 3 – A digital waveform. The information is carried by the transitions, so minor rounding of the waveform does not reduce the data integrity.

A major difference between the analog and digital signal is the bandwidth, or frequency range. Analog audio waveforms contain useful information to about 20 kHz. Digital signal bandwidth extends well into the MHz (mega or millions of Hz) region. This is necessary because the data only has two states, so a lot of bits have to flow to carry the information from the original analog waveform.

The high frequency losses due to cable capacitance tend to round the otherwise sharp edges of the digital waveform. Under normal circumstances this rounding has no effect on the information carried by the signal, because the zero or one is actually determined by the transitions, or zero-crossings. This means that the digital signal is far “less corruptible” by the wire than the analog signal, because it’s not audio, it’s data. This is a major advantage digital audio over analog.

The take-away is that a cable isn’t analog or digital, it’s just a cable that has impedance characteristics that can reshape the signal that travels down it. Both analog and digital waveforms are affected by the cable’s capacitance as the cable length is increased. Both interface types are very forgiving cable-wise at short distances.

The all-or-nothing nature of digital audio can be illustrated with the eye pattern test (Fig. 4). A special analyzer overlays thousands of bits. The effects of noise and jitter reduce the size of the “eye” but so long as it is larger than the AES3 minimum, the signal integrity will be preserved.

Figure 4 – A rounded digital pulse looks like an eye. If the eye collapses too much, data integrity is lost.

Since cable capacitance is cumulative, at some length the high frequency roll-off affects the integrity of both analog and digital signals.

Audio industry-specific digital audio formats, such as AES3 and SPDIF were actually designed to work with the cables used for analog interfaces. A “good old 25 ft. mic cable” can pass digital audio without degradation, and the digital signal does not require a special cable (Fig. 5). If a sound system has a mix of analog and AES3 digital devices, one can use the same cable for each, so long as they route analog outputs to analog inputs, and digital outputs to digital inputs. Simple is good, and it is what the pioneers had in mind when they invented both professional and consumer digital audio interfaces and formats.

Ironically, the effects of excessive length can be worse for a digital signal than an analog signal. Let’s stretch the rules for both and consider a cable run of 1000 ft (300 m). The analog signal will exhibit some high frequency loss, which depending on the program material may result in a slightly “muddier” sound. The digital signal may sputter or stop completely if the distinction between the one and zero is lost. We have all experienced this when comparing digital television with analog. A degraded analog signal is still “watchable,” while a degraded digital signal produces lock-ups, blotches, and other kinds of chaos. “Digital,” whether audio or video, is pretty much an all or nothing proposition.

Figure 5 – A 25 ft. analog-grade mic cable (top) performs as well on the eye test as a digital-grade STP (bottom).

There is no “hard limit” on how long a cable can be, either for analog or digital audio. It would be safe to say that 1000 ft (300 m) is stretching it for either one. But, I can guarantee you that the analog signal will still work at that distance, albeit with some possible audible high frequency loss. At that length the digital signal is less likely to contain information that can be restored to a contiguous waveform. That’s not an advocation for analog over digital, because you shouldn’t try to run either 1000 ft, but I’ll take “muddy audio” over “no audio” any day.

The take-away is that for short distances, you can usually get away with murder regarding both analog and digital cabling. At less than 100 ft (30 m) I wouldn’t be terribly concerned about the cable capacitance corrupting either signal type, but any losses are likely of more consequence for the analog signal. As the soft “100 m limit” for professional digital audio is approached, the cable’s properties becomes a more significant factor, and cables designed specifically for digital audio can improve the integrity of the interface. That same cable may mitigate some high frequency loss in an analog interface. Basically, for short distances nothing matters, and for long distances everything starts to matter.

Digital-grade pro audio cable is low capacitance STP that is designed to exhibit a specific impedance in the radio frequency range that it is designed for. This is typically 110 ohms – the same value as the input and output impedances in the interface. The impedance match mitigates reflections between source and load that could corrupt the data. The importance of maintaining this impedance match increases with cable length, and matters more as you approach the recommended distance limits for the digital format.

Digital audio, when used within its recommended working distance, is very immune to “cable effects” and buying a more expensive cable is not going to result in better sound. Ironically, category cable (e.g. CAT5 and CAT6) has very low capacitance and a 100 ohm impedance, and makes an excellent cable for AES3 digital audio (Fig. 6). While low-cost CAT5 might offer a similar level of performance to a “digital” STP cable, it could be a practical nightmare with regard to wiring, coiling, and transport. But for fixed installations it’s a low cost, convenient way to transport digital signals, and also works well for balanced analog interfaces. 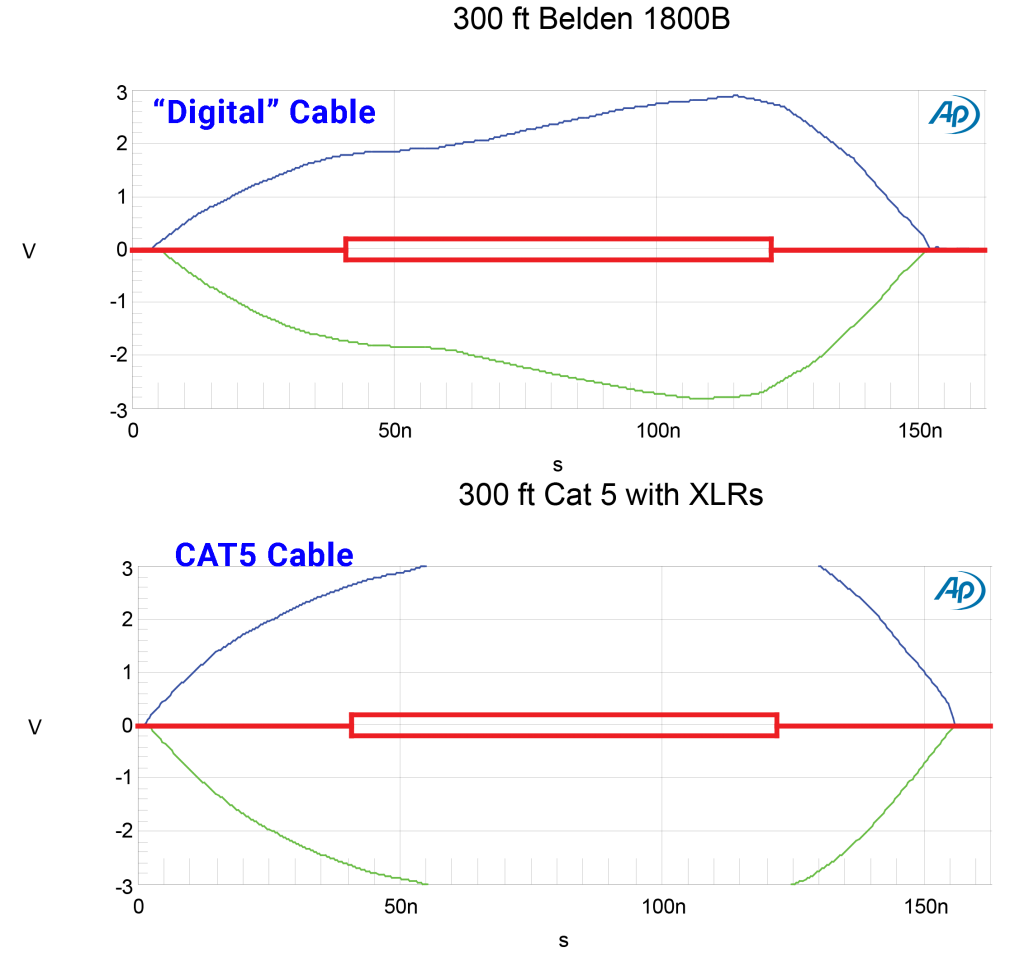 One of the reasons for the transition to digital audio is to take the cable out of the equation with regard to signal transport. While it doesn’t fully deliver on that, the binary “all or nothing” nature of digital audio means that the effects of losses are no longer shades of gray, with some cables sounding “warmer” or “cleaner” than others. This means that the cable doesn’t matter at all until it matters a lot, and you will know it when it happens.

Shielded-twisted pair “digital” cable is designed to have improved symmetry between the twisted-pair and shield, allowing the balanced input and output to better do their jobs. It is not exorbitantly expensive and it becomes increasingly beneficial as the cable length approaches the 100 m limit. Since a good braided shield digital cable is similar in price to a good braided shield analog cable, I use digital cable for both analog and digital interfaces in portable systems.

Digital STP cable is available with a foil shield at about half the price of braided shield digital STP, but at a much higher cost than analog foil shield STP. Cheap, foil shield STP has been the mainstay of installed sound for decades and it works fine for analog interfaces and even for digital interfaces at short lengths. Since foil STP cheap, it is not going away. This presents a problem for large rooms with analog systems that are retrofitted with digital systems, making it advisable to replace the wiring along with the analog gear (Fig. 7).

Figure 7 – Installation-grade foil STP fails the eye test. It should not be used for long runs of digital audio.

Here are the take-aways from this article.

A big part of being an audio practitioner is knowing what matters and when. It is always good practice to design sound systems with the shortest possible cable runs for both analog and digital interfaces. But as the limits are approached, the investment in digital-grade braided or foil STP becomes increasingly justified.  pb