Do microphone reflection filters really work? Through a series of measurements, Steve Liddle will give you some insight.

There has been a plethora of microphone reflection filters coming onto the market in recent years. Being the owner of one such device I decided to investigate how well it works.

My motivation came from what I thought were audible changes in microphone response. I’ve been producing a lot of custom voice alarm and information messages recently and have spent a lot of time listening back to the recordings. I found that those messages recorded without the filter actually sound more neutral.

My recording set-up is very simple and gives me .wav files that can be quickly processed and sent to the client. I usually apply some compression to raise the average level and expansion to quieten noise between words and the recordings generally don’t need any EQ. I record through a Sound Devices MM1 preamp/headphone amp straight to a Tascam DR40 line input.

So, what’s going on and why does the filter affect the sound?

My test set-up included the use of a talk-box placed approximately 15cm from the mic. The mic capsule was placed in line with the front of filter, and also in the middle vertically, which follows the manufacturer’s standard recommendation. The whole package was placed approximately 1,2m from a wall with windows – I thought this was appropriate seeing as a lot of these devices will be used in smaller rooms where the walls and ceiling will be quite close. 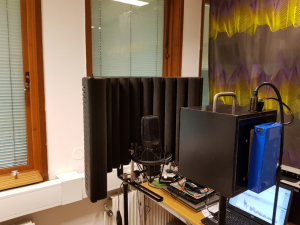 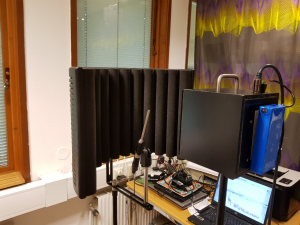 Using a dual channel FFT analyzer I examined the frequency response and energy time curve (ETC) for both conditions – with and without the filter.

In this response it can be seen that there is approximately a 1dB lift below 400Hz and a frequency ripple above and below 1kHz. The ETC explains the reason why.

Interestingly, there are some reflections very early on in the curve. The blue trace shows the curve with the filter in place. The peak at 1,2ms is from the plastic shroud of the filter. The peak at 2,3ms is from the face of the loudspeaker – I confirmed this by placing some thin absorptive foam between the speaker and the mic, the 2,3ms peak reduced in magnitude. (I believe it is the reflection from the filter passing the mic and then coming back to mic from the loudspeaker face).

The peaks on the red trace (without filter) at 6,8-6,9ms are from the wall and windows. The remaining peaks are from the the floor, ceiling, furniture and office equipment. The null at 3,7ms is probably due to the mic being placed roughly halfway between the floor and the 2,7m ceiling in the office. The height changed between measurements as the configuration of filter and cardioid mic meant that I moved them slightly.

Well that seems much better. There’s still a slight ripple around 1kHz but it’s only a fraction of a dB.

This ETC is the most interesting result of the experiment. Without the filter, the wall/window reflections are still present but some 6dB to 8dB lower than with the omni mic. But now there is no significant difference between the  curves around 1-2ms. The microphone’s cardioid pick-up pattern is doing a great job of rejecting sound arriving from the rear.

So do we really need reflection filters or are they just another source of coloration?

If you use a microphone that has significant pick-up at the rear (hypercardioid, supercardioid, figure of eight, omni) then yes, they could help a little, if you can tolerate the frequency response changes. However, the later reflections in this case are so low in level (-30dB or more) that they probably don’t have any significant effect anyway. If you use a microphone with a cardioid pick-up pattern the answer is a resounding no. Ironically, these filters are often bundled with a large diaphragm condenser mic that has a very good cardioid response which negates the need for a filter in the first place.

I have only tested one model of filter which is one of the most economical of this range. I believe that some of the more expensive versions have a larger percentage of perforated area on the shroud and will probably give rise to lower levels of very early reflections.

I think the lesson here is that choice of microphone, it’s orientation and placement with regard to reflective surfaces is a preference over trying to employ remedial acoustical treatments. sl