In the early days of pro sound, there were only a few big equipment manufacturers, and most of the experts worked for them. For relatively small jobs, the local radio station engineer, a radio repairman, or even a telephone installer chose and installed the system. A good friend of mine annually took his Western Electric system out and set it up to support the Easter sunrise service in Winston-Salem, sponsored by the Moravians.

But for big events or venues, the manufacturers’ experts did the heavy lifting, as in the case of Rudy Bozak (of Cinaudigraph) and his landmark system for the 1939 New York World’s Fair (https://en.wikipedia.org/wiki/Rudy_Bozak). By the mid-1960s, independent consultants and contractors had taken over most sound-system design and installation, with manufacturers providing some occasional support as requested.

Lately, however, things have changed a bit. Along with some colleagues, I have noticed a trend toward sound contractors getting at least the speaker system design done by a manufacturer. In at least three cases, this procedure has caused problems. Why should there be problems? Well, there are at least four reasons:

My firm does both acoustical and sound/video system design, but most often when we work for a contractor, we only do the acoustics. In that case, our job includes adding the speakers’ EASE or CLF files or GLL’s to our acoustical model, to check for slap and flutter echoes.

In doing this as part of a recent project, I noticed that the speaker design used two speakers from a fine manufacturer, mounted in a left-right configuration. While we installed vast numbers of left-right (mono-fed) speakers over the years, more recently the virtues of center clusters have led to their frequent adoption. Knowing that this project was a small sanctuary with some budget limitations, I looked not only at the Dietsch/Kraak “echo speech” analysis, but also at the direct coverage and STI as revealed by CATT-Acoustic. Figure 1 shows the direct coverage at 4 kHz for the original design. (4 kHz is one of the critical octave bands for good intelligibility.) Figure 1: The direct coverage for the manufacturer’s design.

You will note the hole in the middle at the front. The direct sound level varies by almost 20 dB. And of course, acoustical imaging will be poor for listeners located significantly off-center. Any time multiple speakers cover the same audience area, interference and comb filtering can be a problem. Figure 2 shows the effects of interference in the 1-kHz octave band with the manufacturer’s system design. In other octave bands, the interference peaks and dips would still be present, but the location and spacing would be different. 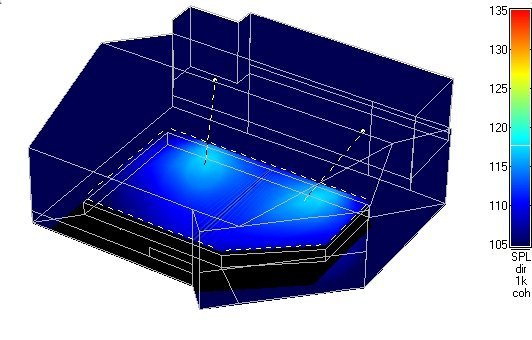 Experimenting with a different speaker by the same manufacturer, I examined a single-center–speaker design which gave the results shown in Figure 3. The plot shows the SPL throughout the audience area for the first 50 ms after the initial sound. (This is the “Haas interval”, defining a single acoustical event. Early reflections arriving within this time contribute to the perceived loudness, but are not perceived as echoes.) The SPL is a uniform 98dB + 5 dB. Direct coverage is almost that good. Of course, since there is a single sound source, there is no interference or comb filtering. 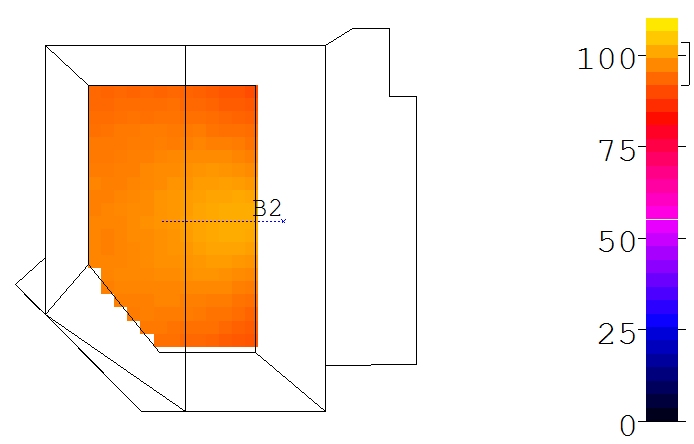 As you can see, the hole in the middle was eliminated and the evenness of coverage was greatly improved. In addition, the cost of the speaker system was vastly decreased. In both the original design and my design, the STI was over 0.6 in the worst seats, with a mean of 0.75. The slight possible disadvantage is the decrease from a maximum continuous SPL per cabinet from 135 to 120 dBSPL. In discussions with me, the pastor had emphasized that although the worship style is contemporary, it is “not a rock-and-roll church”. As mentioned earlier, the maximum continuous SPL in the audience area is about 98 dB. And the speakers’ rated maximum peak level is 6 dB higher. If 104 dB peak SPL is not enough, you could use a single-center-speaker design using a different manufacturer’s speaker, and increase the maximum SPL by up to 12 dB while retaining the superior acoustical imaging and freedom from comb filtering provided by the 1-speaker design. 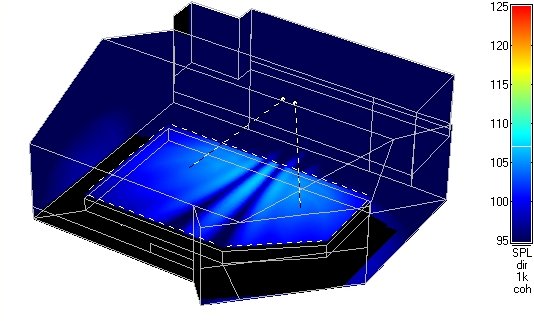 It would be tempting to array two identical speakers at the center to provide a higher SPL while still retaining even coverage. However, as shown in Figure 4, the interference bands become wider and more pronounced with this approach. Since the depth, location, and spacing of these bands depend upon the distance between the acoustical centers of the speakers and the frequency, changing the aiming will not help eliminate them. As always, a single center speaker gives the best results. I’m not sure this is enough of an issue to matter. The interference disappears from the plot after 50 ms.
You could avoid the issue completely by using a single wide-coverage center speaker, but the one available from the preferred manufacturer wants a 24 dB/octave high-pass filter at 70 Hz, so you’d need a sub. Figure 6 shows direct + reflected coverage and SPL for maximum long-term power in the 4-kHz band (band with worst coverage). SPL ranges from about 100 dB in the house-left rear corner to 108 dB at the hottest point. 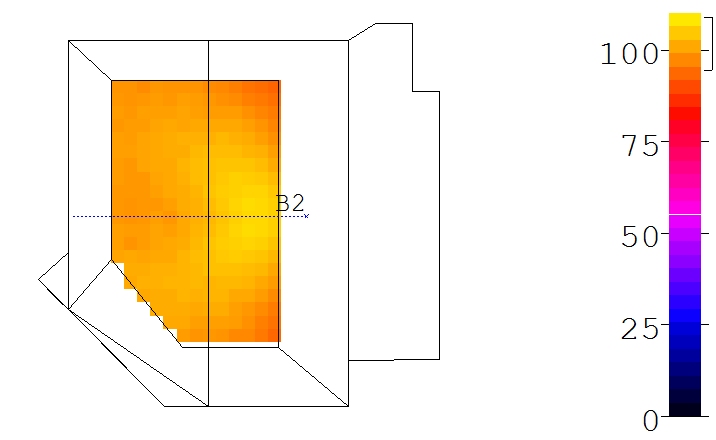 I made an auralization (the link is below) using the center pair, with the listening location set at the location of the deepest dip, so we can see if it’s an issue. I don’t think so, but your opinion may differ. rh

Auralization using the center pair – Have a listen!