Pat Brown continues with the Common Amplifier Format (CAF) series. In this article, he overviews the AtlasIED DPA 1202 amplifier.

The Common Amplifier Format (CAF) series continues with the examination of an amplifier designed for the commercial sound market. AtlasIED has been a major player in that space for 80+ years – designing and manufacturing loudspeakers, racks, amplifiers, and advanced DSP. I’ll have a look at one of their amplifiers in this article – the DPA 1202. Please download the freeware CAFViewer™ and data file for this amplifier to follow along.

The DPA 1202 is a 4-channel 1 RU amplifier with onboard DSP. The unit I tested sports a Dante interface, but I used the analog inputs for the tests. The amplifier’s many options are configured via a browser-based GUI.

The most brutal way to test a multi-channel amplifier is to feed the same signal to all of the channels simultaneously, with each loaded to its minimum rated impedance. This stresses the power supply since high current demand is synchronized, with all channels pulling hard on it at the same time. That’s how amplifier’s are tested using the CAF. To do otherwise creates too many scenarios and too much data. Multi-channel amplifiers should be designed based on this worst-case assumption. If it doesn’t materialize then the amplifier has an easier job, and that’s a good thing.

The CAF report has one I/O matrix tab for each operational mode of the amplifier. If you have to throw a switch or change a wire to configure the amplifier, the report gets a tab. There is no practical limit on the number of tabs. The modes for the DPA 1202 are 8-ohm, 4-ohm, 70V, and 100V, selected via the GUI. In the CAF, 8 and 4-ohm operation is termed “Low-Z” and 70 and 100 V operation is termed “High-Z.” Figure 1 shows the expected output voltage for each mode based on the rated power.

Figure 1 – The expected output voltages determined from the rated power.

If a multi-channel amplifier cannot meet its rated power with all channels in operation, I do a single channel test. While this is not uncommon, especially for large amplifiers, it was unnecessary with the DPA 1202. The 4-channel and 1-channel power is essentially the same, even with a continuous sine wave. In the 8-ohm mode, this amplifier has no problem holding a sine wave, with increased fan speed as the only clue that the amplifier is working hard. The burst and sine wave voltages are essentially the same in the 8-ohm mode, indicating stiff rails that do not sag under load.

It is unusual to see 8-ohm and 4-ohm operation presented as separate modes with a switch used for selection. There’s a good reason, and the I/O matrix tabs tell the story. In the 8-ohm mode, the amplifier produces 40 Vrms and draws 15 A of current when passing a sine wave (all channels driven). Since that is all the current that is available from a typical utility power circuit, 4-ohm operation is not possible at this sustained output voltage. Note that 40 Vrms is higher than the expected 35 Vrms, so the amplifier is conservatively rated.

This dilemma is solved by the 4-ohm operational mode. When selected, the output voltage is limited to 28 Vrms (continuous sine). This 3 dB voltage reduction allows the amplifier to drive a 4-ohm load(s) – clever. I suspect that many users will default to the 4-ohm mode due to its higher (burst) power rating, but since the output voltage is lower in this mode so is the SPL from the loudspeaker, which drops 3 dB when the amplifier is switched from 8-ohm operation to 4-ohm. So, for max SPL the 8-ohm mode should be used, unless you want to daisy-chain two 8-ohm loudspeakers onto one channel. By reducing the output voltage the designer has made more current available. But, since the current draw is determined by the load impedance, the extra available current doesn’t just automatically flow into the load. Unless you actually load the amplifier to 4-ohms, keep the switch in the 8-ohm setting to maximize the output voltage and the SPL from the loudspeaker.

There are several reasons why 8-ohm loudspeakers are an optimal load for most “Low-Z” amplifiers. The amplifier is less likely to run out of current and less copper is required to make the connection to the load. Given the way that loudspeaker impedance is measured and rated, amplifiers are designed to drive 4-ohms so that they can drive real-world 8-ohm loads, which can have an impedance minimum of about 80% of the rated value (≈ 6-ohms). 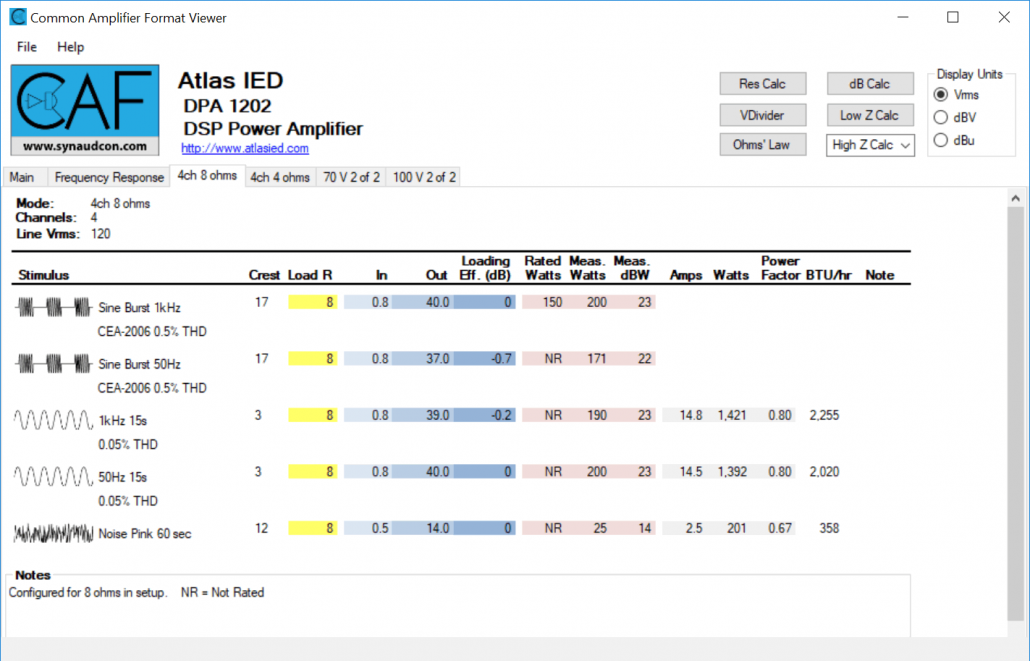 The desired behavior of an amplifier at full voltage swing has been debated for decades. There’s a “clip” camp and a “limit” camp. Of course one can make a solid argument for either, hence the debate.

The DPA 1202 limits when the full output voltage has been reached. The output voltage does not exceed the value shown in the matrix, even if the input voltage exceeds the rated sensitivity of 0.775 Vrms (0 dBu). I was not able to drive it to a target distortion threshold. As a result, you can hit the input of this amplifier pretty hard before you get audible clues that you’ve run out of voltage swing. This behavior is not revealed by the max voltage/power ratings shown in the I/O matrix, since the CAF only tests for linear amplifier behavior. If you wish to compare two amplifiers operating under non-linear conditions (e.g. over-driven or over-loaded) then you will have to listen to them. Over-driven means “too high input signal” and over-loaded means “too low load impedance.”

The CAF does not force a rating method on the manufacturer. What it does is reveal is how the amplifier got its rated power. The DPA 1202 is rated with a 1 kHz burst waveform and the published specs say so. This is shown in the CAF report as the rated condition. To its credit it does well on sine waves, and that is good to know. That makes it more powerful than an amplifier that tanks on a sine wave, even though that amplifier may have the same burst power rating. One never knows what might be played over the sound system, so preparing for the worst is a good philosophy. It also held up well on the 50 Hz burst test, holding its output voltage an and maintaining the burst waveform shape. This 8 dB crest factor waveform is much more demanding than the 1 kHz burst waveform (17 dB crest factor) used to rate the amplifier. This is because 10 cycles of 50 Hz lasts ten times longer than 20 cycles of 1 kHz – longer time equals more power. As per CEA-2006 the bursts repeat at approximately 0.5 sec intervals.

70 V and 100 V operation result from bridging two amplifier channels, so in either mode the DPA 1202 is a 2-channel amplifier. It is also possible to have 1 channel of high-Z operation and 2 channels of low-Z, for a total of 3 channels. In the 70 V mode it is rated to drive loads as low as 8-ohms and in the 100 V mode loads as low as 16-ohms. In either case it is probably better to keep the load higher (e.g. 2x) and use a high pass filter. The filter can be dialed-in in the DSP section. Loudspeaker transformers can get very reactive below 80-ish Hz.

The term “High-Z” refers to driving a loudspeaker through a step-down transformer. The DPA 1202 can drive a LOT of these in parallel, and even though it can be loaded to 8-ohms (70 V) or 16-ohms (100 V) this is still considered high-Z operation since the individual loudspeakers on the line have step-down transformers or are designed to function like they do. Can the 70 V mode be used to drive a low-Z (e.g. 8-ohm) loudspeaker? Most likely, but it is not rated for that use. Remember that an 8-ohm loudspeaker can be as low as 6 ohms over some frequency range and this could excessively load the amplifier with some types of program material.

As a sound system designer, I like the option of both 8-ohm and 4-ohm modes. It reminds me to not let the load impedance get too low or I’ll have to sacrifice voltage swing to drive it. It also reminds me that you can’t get something for nothing and that sound system design is a business of compromise. Too often amplifier decisions are made based on “getting the most watts.” With the DPA 1202 the lower wattage setting (8-ohms/150 watts) produces the highest SPL from the loudspeaker since it produces the highest RMS voltage. The I/O matrices of the CAF make this clear. In the CAF file the system designer can just double-click on a voltage in “Out” column of the matrix to launch the SPL calculator.

The DPA 1202 pretty much maxes out what can be delivered by a 120 V/15 A utility power circuit. That’s 1800 volt-amperes (VA), found by multiplying the voltage times the current. A total audio power of 1200 W serves as a defend-able estimate of the max power that can be expected from any amplifier designed to operate from an 1800 VA supply. Packing this into 1 RU (with a quiet fan) and stirring in a DSP is quite an engineering accomplishment – a testimony to the efficiency of modern amplifier technology.   pb