The most popular form factor for audio power amplifiers is two-channel or “stereo.”  Pat Brown answers this question, “Why two amplifier channels?” 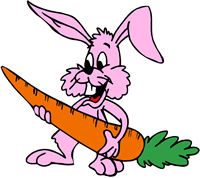 Why two amplifier channels? It’s most likely due to the popularity of stereo playback systems since the early days of hi-fi. Two audio channels, two loudspeakers, two amplifiers, two ears – it seems logical. Even though this is the most popular form factor for professional amplifiers, the majority of sound reinforcement systems aren’t stereo. But, having two amplifier channels in the same box can provide some other benefits. So, “What’s the carrot?”

Since we call a two-channel amplifier “stereo,” configuring the channels to combine their outputs into a single load is referred to as “mono.” There are two possibilities – bridged-mono and parallel-mono. These potentially useful configurations are often misunderstood and mis-used. Let’s cover the basics with a simple example of connecting multiple power sources. 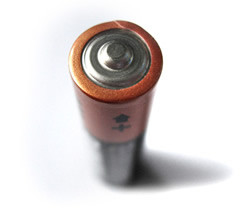 A single AA battery is 1.5 VDC, and can source about 2000 mA continuous. Let’s not worry about for how long, which is mAh. It’s not important for this discussion.

If I have two AA batteries, I can connect them in series or in parallel.

In the series configuration (Fig. 1), the output voltages add, so I now have a 3 VDC supply. The current remains the same as for the single battery. Twice the voltage, same current – remember that. The current flow depends on the load impedance, but the available current is equivalent to that of one of the batteries.

If you need more voltage and more current, you can connect 4 power sources in series-parallel. That’s a common practice for batteries but not for audio power amplifiers. There are now a number of multi-channel amplifiers in the professional audio marketplace that support series-parallel connection. Of course four amplifiers are required.

So, having two batteries allows me to get more voltage, or more current, than can be supplied by a single battery. Which configuration is best? It depends on other factors.

Back to Power Amplifiers

Let’s substitute power amplifiers for batteries. The principles are the same. The difference is that the power amplifiers are passing audio signals (not DC) and that they are wired to a utility power source (so they don’t get depleted over time like a battery).

A two-channel amplifier configured for bridged-mono can swing twice the voltage than either channel individually, at the same current as one channel. This is useful for driving a load that can handle a lot of voltage swing, but whose impedance is high enough to not excessively load the amplifier. Examples include large full-range passive boxes and transformer-distributed (i.e. 70 V or 100 V) loudspeaker systems. Most spec sheets suggest “8 ohms or higher” for the bridged-mono configuration, which is the equivalent of loading each channel to 4 ohms. The power rating of the bridged-mono configuration into 8 ohms is typically 4x that of the single channel 8 ohm rating, since you are doubling the voltage into the same load.

That’s 6 dB more acoustic output when compared to driving the loudspeaker with a single channel. If your loudspeaker can’t handle the higher voltage swing, then you haven’t gained anything by using the amplifier in the bridged-mono configuration. The “carrot” is the extra voltage.

A two-channel amplifier configured for parallel-mono has the same voltage output as one of the channels, but can source twice the current. This may be useful for driving very low impedance loads (read “current hungry”) that would otherwise engage the amplifier’s current limiting circuitry and cause its output voltage to drop under load. A 2-ohm load is not a great idea for numerous reasons, but if that’s what you have been dealt, then parallel-mono is a valid method for powering it. Caution: Not all 2-channel power amplifiers support this mode of connection. Consult the manufacturer’s spec sheet and owner’s manual before attempting! 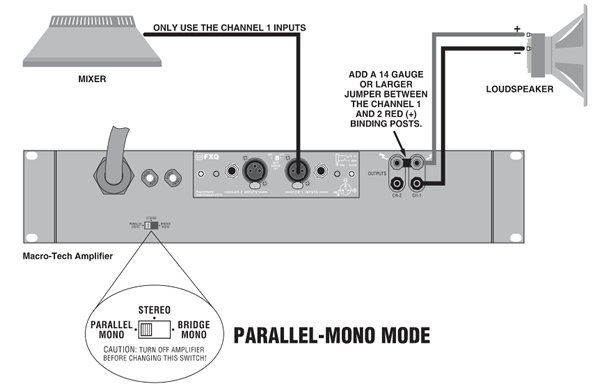 The “carrot” for parallel-mono is the extra available current. If your load impedance (loudspeaker) doesn’t draw the additional available current, then you haven’t gained anything from the parallel-mono configuration. Current is “drawn by,” not “injected into” the load (a common misconception). It is determined by the load impedance. There is no knob on the amplifier for current output. Current flow (and the resultant power flow) is determined by the selection of the output voltage and impedance seen by the amplifier.

One can get quite confused when deciphering the spec sheet of a two-channel amplifier. There are numerous ways to hook these things up, and each will have a different power rating. Configurations include:

3. Bridged-mono into a single load

4. Parallel-mono into a single load

This is why amplifier spec sheets usually provide a “power matrix” for the amplifier’s output capability.

It’s no wonder that much confusion ensues, especially in an industry where “more power is better” is the mantra and amplifiers are presented as a “box of watts” with a “watt knob” on the front (or back) of the amplifier. This has led to the abuse of power ratings to the point where they have become meaningless. The Common Amplifier Format (CAF) breaks the power rating down into voltage, current, and impedance. This allows one to not only see where the rating comes from but better understand an amplifier’s limitations.

Here are some common questions regarding bridged-mono connection.

Q. How can I get “4x the power from 2x the channels” using bridged-mono? It seems like I am getting something for free, but Pat Brown says that I can’t.

Q. XYZ amplifier claims to be able to run bridged-mono into 2 ohms. Isn’t that a good thing since that’s the amplifier’s highest power rating?”

Two-channel amplifier configurations are best understood from the simple battery example. You either get more voltage or more current than either of the individual power sources. “Which is best?” is better phrased “Which is appropriate?”

Most amplifiers run out of voltage swing long before running out of current, since audio signals usually have high peak-to-RMS ratios (crest factor). This makes bridged-mono a much more popular and useful configuration than parallel-mono. If you are feeding sine waves to 2 ohm loads, parallel-mono may offer some benefits. But don’t forget to stop and ask “Why?” Don’t be tempted to configure the amplifier for its highest output power rating. Break it down into voltage, current, and impedance and then use the operational mode that best suits your loudspeaker.   pb