To this day the State of Wisconsin, whence I sprang as a lad, has a law on the books that makes it illegal to operate your car in reverse. Another state has a law that requires anyone coming to a 4-way stop to halt and yield to the other driver.

I believe that it’s Indiana that has a law making it illegal for women to drive into the side of a parked freight train on weekends. (You gotta wonder where that one came from!!)

Absurd? Sure, but nonetheless put on the books for reasons that are real.

We do the same things. For example, one of the things that we’re asked to do when evaluating antenna array performance is to measure the signal level in “nulls.” I run into this all the time in antenna work because the FCC in its antique wisdom requires that I measure the signal in a place where, by definition, there is none.

Of course, that statement “there isn’t any?” is also wrong. Discounting noise, there’s a lot of signal it’s just arranged in a way that results in us…that means you and me…being unable to get to it by our measurement means.

The good news is that we don’t need to. Since we have defined the null as “a place without signal we can detect,” our detectors…ears, microphones, antennas into receiver front-ends, and stuff like that there…not seeing any gives us to believe that we have “destroyed” the signal and achieved (in RF) or found the null. It’s still a Newtonian world for most of us so we’re not allowed to destroy energy under those rules.

I was at a conference recently and shared with Blair McNair, a notable mind in audio circles, that this is like having a box with a dozen “red” eggs and a dozen “blue” eggs and the condition that “red” + “blue” = “0” so you have a box that has two dozen eggs that you can’t find in it. Blair commented that it was too “Schroedingeresque” for him, which sent me to the encyclopedia…and the Tylenol bottle. Of course if we were into “super-string” eggs they’d still all be there but the probability of finding one or all would be close to zero. There’d be up-eggs and down-eggs….

If we add in the additional caveat that we often use equipment with a tolerance of ± 10% or more to look at things which often require a reporting precision of 2% or so you can understand the challenge to rational thought on the subject. This is the measurement equivalent of the lady with size ten feet who tried on size eight shoes and found they were so tight that she ended up buying size six.

So what’s the conclusion? I guess it has to do with the interpretation skill of the person making the measurements. It also has a lot to do with their understanding of the test environment and test equipment and selecting the right thing for the job.

It seems that if I have the Time, I don’t have the Energy and at my age Frequency isn’t even discussed.

Thanks to Pat and Brenda for the chance to write for the Syn-Aud-Con Newsletter. I’ll try diligently to not step on the toes of the real thinkers and writers! js 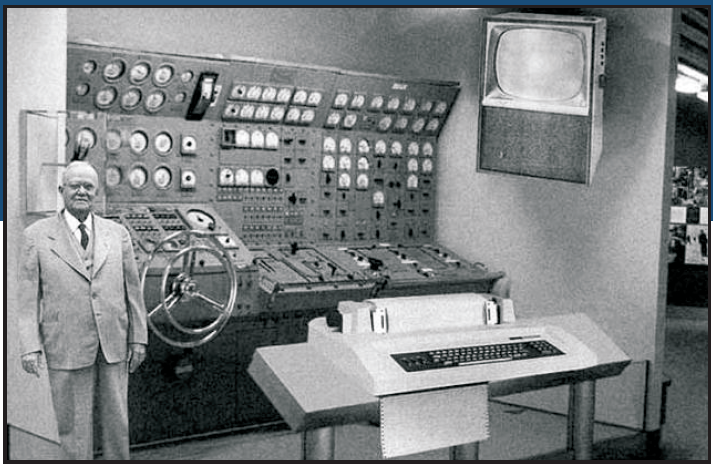 Original caption: Scientists from RAND Corporation have created this model to illustrate how a “home computer” could look like in the year 2004. However the needed technology will not be economically feasible for the average home. With teletype interface and the Fortran language, the computer will be easy to use.