Pat Brown shows some ways to measure your sub and to predict it’s performance to control room modes.

We all would like to have a loudspeaker with flat frequency response from 20 Hz to 20 kHz. Since no loudspeaker can cover that range at foreground music playback levels, the task is usually divided among several transducers, each having about one decade of bandwidth. The low frequency decade (20 Hz – 200 Hz) is often subdivided again with the lowest frequencies (20 Hz – 80 Hz) being routed to a subwoofer. The objective of a flat frequency response is quite a challenge for a subwoofer placed in a small room. Room modes produce significant coloration as the low frequencies (long wavelengths) interact with the room in a complex way. Figure 1 shows the free-field response of a subwoofer, and Figure 2 shows the same subwoofer measured in my listening room at the sweet spot. BIG difference!

In this article, I will tackle several obstacles to subwoofer deployment in small spaces. These include measuring the sub, placing the sub, and finding a good placement using prediction software.

A simple way to evaluate subwoofer performance is to listen to a slowly swept tone played through the sub. Outdoors no one frequency would dominate the other frequencies. Indoors, some frequencies will be very loud and others will be hardly audible. The insets on Figures 1 and 2 show the response of a sweep file played through the sub. The peaks and dips are clearly visible (and audible!) in Figure 2. The objective of coming up with a good subwoofer placement is to smooth out the response and reduce the variance in level. A WAV file for evaluating your sub as described above can be downloaded here1. It is a 20-second log sine sweep from 20 Hz to 150 Hz. The level is -6dBFS. Play it from a PC/iPod or burn it to a CD. Watch your playback level! High level sine waves can toast woofers. 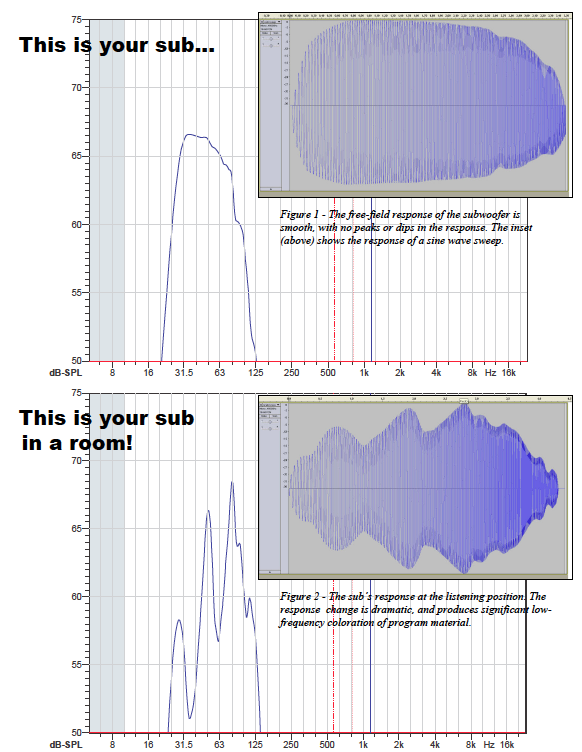 Now that you are convinced that your sub response has problems, read on for some things that can improve its performance.

Subwoofers are perhaps the most difficult transducers to measure. There are many methods, and an excellent online article on the topic can be found here.2 The bibliography is quite comprehensive and should allow the reader to dig into this to about any detail desired. My emphasis here will be on the practical.

First, why measure a sub? As always, the answer is “To assure proper operation .” Since a subwoofer placed indoors will never have a flat frequency response, the only way to know that the transducer is working properly is to take it outside and listen to it, or leave it inside and measure it. Of course, one could do both, which is what I have done here.

To measure a sub, we need – two things proper mic/loudspeaker spacing and freedom from reflections.

Placing the microphone in the far-field (at least one wavelength away at the lowest frequency-of-interest) is difficult indoors. At 40 Hz the required distance is about 30 ft. Anechoic chambers are not practical due to the required measurement distance and low frequency limits of the chamber, so, we must move outdoors or into a VERY large space. Since I have the former (but not the latter) I initially measured the subwoofer-under-test (SUT) outside (Figure 3). While a solid approach theoretically, there are problems in practice. I couldn’t get the loudspeaker high enough to get an anechoic response, plus there were reflections from the support structure. Once must take truly heroic measures to measure a sub in this manner (Figure 4).

A ground plane technique could be used in lieu of the free-field method. Both SUT and microphone are placed as close to the ground (floor) as possible. This method is practical if you have a gymnasium or similar sized space or even a parking lot to work in. The surface need not be extremely smooth since we are dealing with wavelengths that are large relative to the surface relief. My driveway didn’t prove sufficiently level for this technique used to such a low frequency (Figure 5)

I used a hybrid approach of placing the microphone in a hard corner, the sub in the center of the room (Figure 6). I then windowed out the room in the measurement software. I could not achieve a time window of sufficient length to be anechoic to 20 Hz, so I applied 1/3-octave smoothing to remove the ripples. I’d call this “semi-anechoic” but certainly adequate given the objective of establishing the bandwidth of the subwoofer. 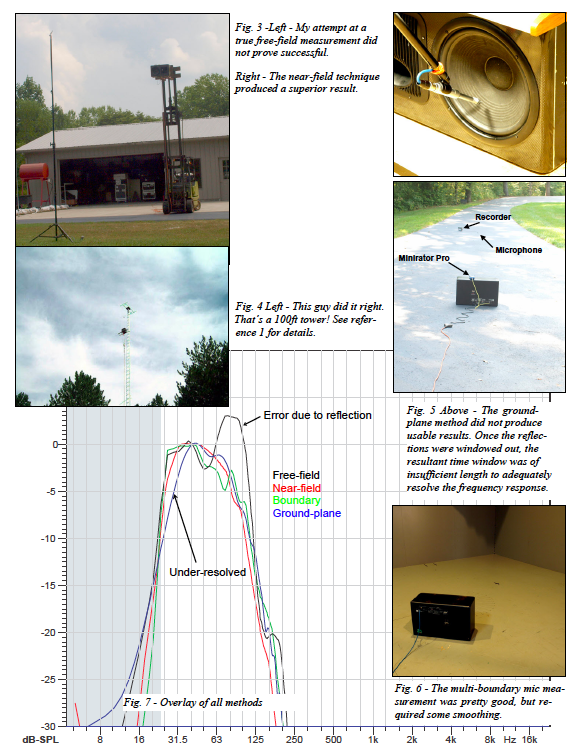 An additional method is to use a near-field placement of the microphone. The idea is that the mic is so close to the SUT that the room response is completely swamped out. The mic is placed very close (~1cm) from the cone surface. Since the SUT has a port, it is a bit trickier. I positioned the mic between the port and cone to include the response of both.Don Keele has presented this method in detail3.

Of the four methods presented, the near-field technique is by far the most practical, with the only drawback being the complexity of working with vented enclosures. The Keele paper provides the theory, requisites and constraints.

The next step of subwoofer deployment is to place it in the room. The location may be determined by the physical size, available space, or spouse. The best case is to place it based on optimum acoustical performance. The ray tracing and image source prediction methods used by room modeling programs do not work well at low frequencies. These methods treat the sound wave as a ray, and the reflecting surface as a mirror. The long wavelengths produced by subwoofers do not interact with small rooms in this manner.

The Boundary Element Method (BEM) of room response prediction is over-viewed in Dick Campbell’s excellent article This is Your Brain on BEM4. There have been some new developments in that area so I will pick up from where Dick left off. You will need software. The ABEC program from R and D Team is in beta and is providing some useful results. You can download it here.5 From the ABEC web page:

ABEC stands for Acoustic Boundary Element Calculator with sub-domain modeling. ABEC directly solves the Helmholtz Integral for the interior and exterior radiation problem. It’s all acoustics, no mechanics. The integral is solved by decomposing the structure into triangles assuming constant pressure on each finite element. ABEC supports sub-domain modeling. In this mode the total structure is split into several domains. The solving happens in two stages. First, each sub-domain and subsequently, the total system is solved. Sub-domain modeling is powerful for larger acoustic systems, such as vented loudspeaker enclosures or horns, for example. In BEM it is the only way to deal with the Infinite Baffle radiation. ABEC standard mode is 3D but also supports the axis-symmetric model.

Jonathan Sheaffer has written a utility to allow Google Sketchup to be used for room creation and source/receiver placement for ABEC. This utility can be downloaded at no charge from here.4 As expected with Sketchup, the process is simple and intuitive.

So there you have it! Lots of tools to experiment with and no outlay of capital.

Figure 8 shows my shoebox-shaped listening room as created in Sketchup with about three mouse-clicks. I placed a plane for mapping the sound pressure distribution at ear height. This is a simple drag-and-drop function in Sketchup using Jonathan’s utility. I also placed a microphone at the listener position to “measure” the frequency response of the subwoofer. The subwoofer is an ideal spherical “point” source, also placed by drag-and-drop. After creating the room and placing the BEM components I did the export and launched ABEC. ABEC imports the room and source/mic info and maps the pressure field over the listening plane. The prediction takes about 30 seconds for a listening room – sized space. Large rooms take forever, but there may be no point in using BEM for a large room, where the modes occur at much lower frequencies. 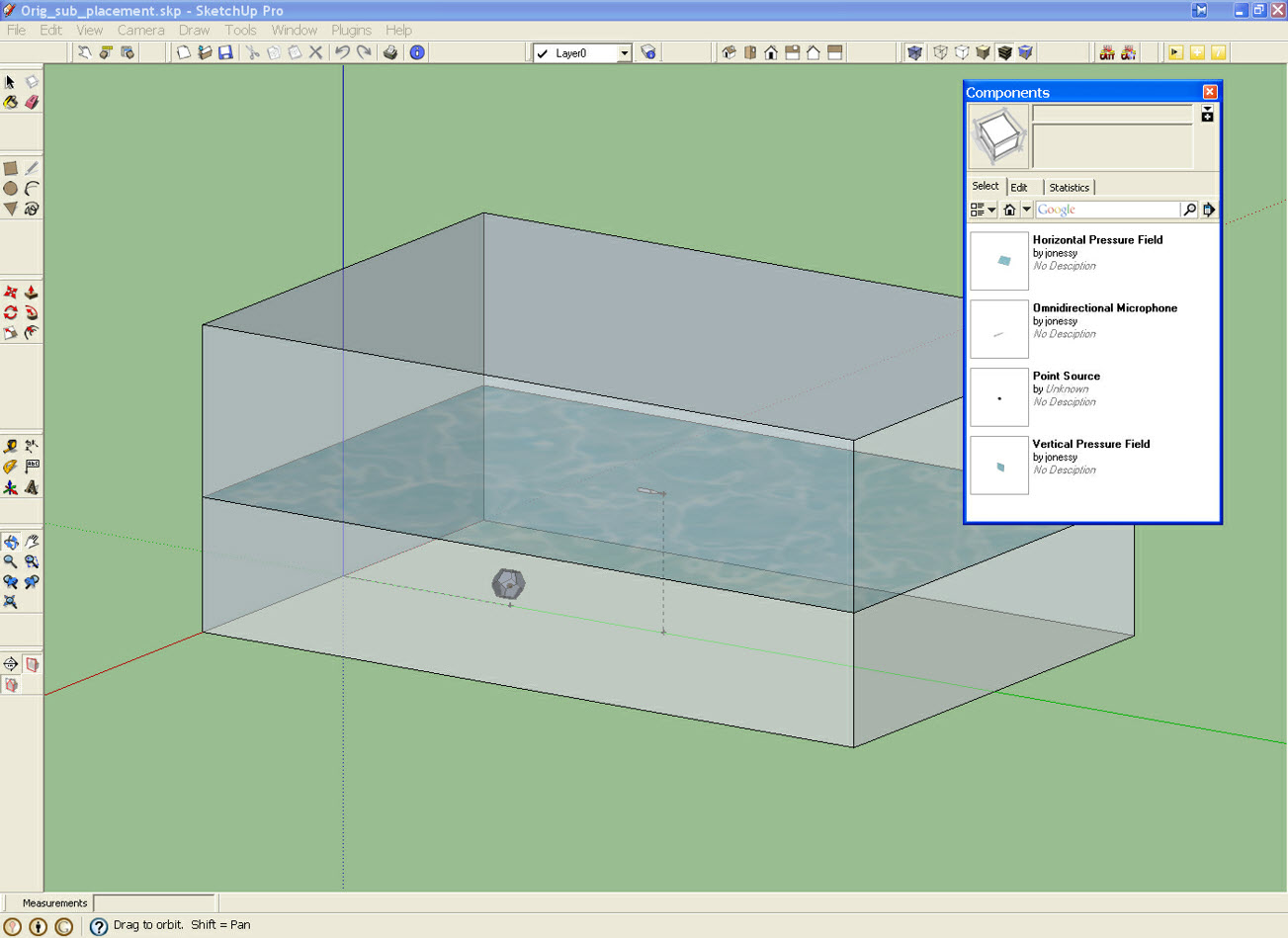 Figure 8 I used Sketchup to create a shoe-box. The listening plane, source and receiver were added with SketchupABEC. 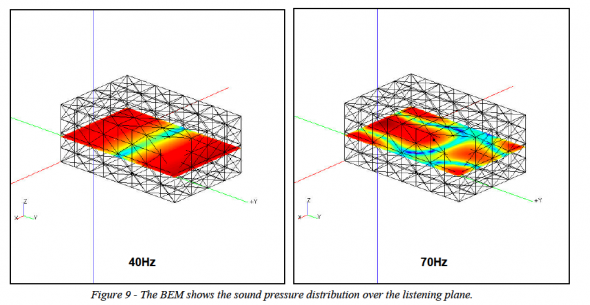 This is where it gets a bit discouraging, as every frequency (10 Hz spacing from 20-150 Hz – user selectable) produces a completely different pressure map. It quickly becomes apparent that there is no way that your sub is going to have a flat frequency response or even coverage when placed in a small room (Figure 9). From this point on, it’s all about damage control, not accuracy. Since there exists an infinite number of possible source/mic placements, experimenting can keep you busy for quite awhile. Some guidelines include:

I showed earlier that the near-field measurement technique allowed the sub to be measured virtually independent of the space. This same principle can be applied to subwoofer placement. Try putting the sub VERY close to where you will sit. The sub’s direct field response will tend to swamp out the contribution from the room. Get creative. I tucked the sub in my listening room under the mixer, right at my feet. Figure 10 shows the predicted response at the the listener position (there’s only one – my chair). Figure 11 shows the measured response. I added a couple of parametric filters to smooth the peaks, and viola! I had a much improved performance over the original placement of the sub. 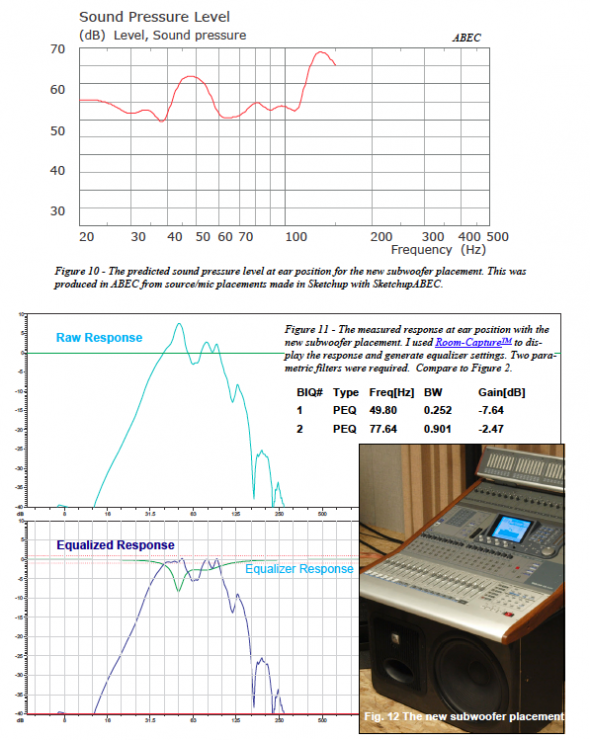 There are a few additional lessons here: