This article gives an overview of the TOA ZM-104 Analog Impedance Meter characteristics and some of the basic tests that it can run.

From SynAudCon Newsletter Vol. 32 No.3

One of my favorite field tools is a basic analog impedance meter. It can be used to troubleshoot a host of sound system problems, either stand-alone or with some additional gadgets. The TOA ZM-104 has been around for many years and many experienced audio people have one. Mine has served me well and has the scars to prove it. It will be the example meter used in this article, although in principle the tests can be conducted using any similar device. Here is an overview of the meter characteristics and some of the basic tests that it can run.

Electrical power sources produce voltage and current. Electrical current between a source and load may flow in one direction only (direct current or DC) or in both directions (alternating current or AC). Impedance is the opposition to the flow of electrical current. It has two ingredients – resistance and reactance. Only resistance need be considered in a DC circuit. Both resistance and reactance must be considered in an AC circuit. An ohm meter measures the opposition to DC, which is why it is sometimes call a resistance meter. The meter itself can serve as the current source. In alternating current circuits, another form of opposition is present. Reactance is the frequency-dependent opposition to the flow of current. It cannot be measured with an ohm meter, because DC flows in only one direction. An impedance meter generates an alternating current which can be fed to the device-under-test (DUT from here on).

Several methods can be used to determine the impedance of a load. The most straightforward way is to use Ohm’s Law to determine impedance from the volt- age across the load and the current through it. Figure 1 shows how to make the measurement with a volt- ohmmeter (VOM). Impedance can also be measured using a constant current source. This is the method that the ZM-104 uses. The meter has a high output impedance and acts like a constant current source (the current through the load is independent of the load impedance). The small voltage drop across the load is proportional to the load impedance. This voltage produces the meter deflection on the calibrated scale. 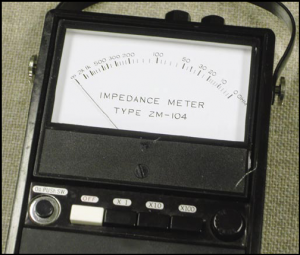 Figure 2 shows the ZM-104. It’s a classic looking device, with black chassis and analog meter movement. There is an “off” button along with three range switches, a zeroing button and a zeroing potentiometer. The range switches are used to change the range of the analog display by factors of ten. As with all analog meters, the range setting that produces a mid-scale reading should be used. The zeroing button temporarily shorts the output terminals of the meter together, allowing the zeroing pot to be used to “zero” the meter. The meter probes can be shorted as an alternative to using the zeroing switch. Note that the meter must be re-zeroed if the range switch is changed. As with all electrical or acoustical measurements, the measurer should make an educated guess about what the reading should be before the measurement is made. If completely unsure, then start with the x1 button and work your way up until you get a mid-scale reading. The meter’s output signal is a 2V peak square wave at 20mA (x1 range).
The analog meter movement is great for finding intermittent problems. There is no “boot up” required and the 4AA batteries last for a very long time between charges. It is simple, durable, low in cost and easy to use. A great deal of sound system problems can be found by a trained user armed with a ZM-104 and a few other gadgets.

Note that impedance meters can be used to test components that are switched “on.” It is important that the component NOT be passing a signal! So, “powered on” and “no signal present” are important prerequisites for any of the following tests. For all tests, the leads on the ZM-104 can be applied without regard to polarity, although they are shown as red and black in the figures. 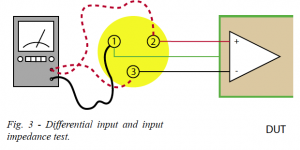 Differential inputs have inverting (-) and non-inverting (+) inputs (pins 2 and 3 on XL connectors). An active differential input can be identified by connecting one lead of the ZM-104 to pin 1 and the other to the plus and minus alternately.
Both connections should produce an output signal from the DUT (Fig. 3). 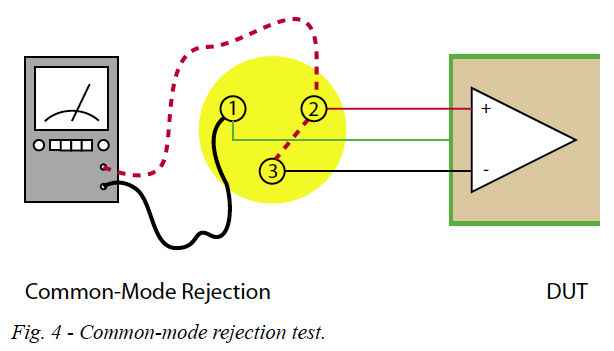 This one is just like the differential input test, except that instead of driving the + and – terminals alternately, lay the test probe across both (Fig. 4). The signal will be cancelled by the common- mode rejection ratio (CMRR) of the input if
it is differential.

A balanced output will have the same output impedance from each output leg. Use
pin 1 as common and check the impedance into the plus and minus terminals respectively. The value should be low (typically less than 600 ohms) and within 1% of each
other (Fig. 5).

Fig. 5 – Balanced outputs can be tested by alternately injecting a signal between 1-2 and 1-3.

The ZM-104 will tolerate a dead short between its output terminals, so it makes a great continuity tester. The analog meter movement makes spotting intermittent connections quite easy. I will often use this test to verify that all metal panels on an electronic product are at the same (ground) potential. Don’t be afraid to scrape a little paint when doing this test. 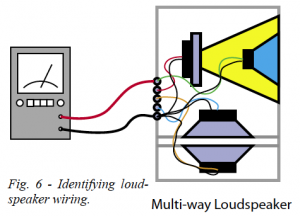 The ZM-104 will produce a distinguished tone from a loudspeaker, without the use of an amplifier. I will often use this to identify pairs in multi-way loudspeakers. The 1 kHz square wave has enough spectral content to produce some level of output from any loudspeaker component. Horns are easily identified over woofers by the increased loudness and definition of the tone.

Sometimes you just want to know if a device passes a signal or not. In such cases, the ZM-104 can be connected across an input. The voltage should be sufficient to drive any mixer to “meter zero.” Alternately, a butt set (Fig. 7) can be used across the output of the device to detect the signal.

The individual pairs in multi-pair “snake” cables can be identified by connecting the ZM-104 to a twisted pair, and then “sniffing” the other end with an inductive tracer (Fig. 7). These tracers are available at electronics and home supply stores.

Many audio products have the internal audio ground connected to “pin 1” of their input and/or output connectors (Figures 9 and 10). This is a bad practice (it causes hum and buzz) and it needs to be identified and corrected. “Pin 1 problems” can be found by connecting one lead of the ZM-104 to chassis and the other lead to pin 1 of each I/O connector. If this connection produces an audible tone from the unit, then the shield of the connecting cable should be lifted or routed directly to the chassis with a jumper. The ZM-104 sources about 20ma on the x1 setting. This is enough current to identify the problem but not enough to damage any internal components, etc. See AES Journal Reprint June 1995 Grounds and Shields for more information. 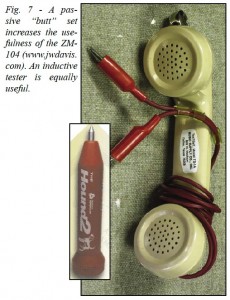 Fig. 7 – A passive “butt” set increases the usefulness of the ZM-104 (www.jwdavis.com). An inductive tester is equally useful.

Oh yes, the ZM-104 can actually be used for what it was designed for – measuring impedance. The 1kHz tone is perfect for checking the impedance of any input or output of an electronic audio component. Keep in mind that loudspeakers have complex impedance curves, but the 1kHz impedance measurement can at least reveal whether the voice coil has continuity, or whether a loudspeaker line is open or shorted. These are by far the most common fault conditions for installed and portable loudspeakers. If you need to know the minimum impedance of a loudspeaker (this is usually the parameter of interest when loading amplifiers and selecting cable) then use your ohm meter across the loudspeakers terminals. This will measure the DC resistance of the transducer, which is typically the low spot on an impedance curve. Note that transformers and capacitors will not pass DC, so if you need to know the impedance of such devices you can simply measure the current with a know voltage applied and calculate it using Ohm’s law (Figure 1).

In this age of computers, DSP and wireless communications, don’t overlook the time-proven fundamental tools of our trade. The mark of a good audio technician isn’t having the latest gear, it’s knowing how to get the answer with the tools that are available.