It is very important for sound engineers to be aware as possible of our hearing limitations. Richard Honey makes some excellent points to consider.

Most contractors and consultants wind up a project by training operators. The lion’s share of this training is focused on how to operate the equipment. But we also try to help the operators with the artistic side of their craft. I once had an employee— we’ll call him “M”—who helped greatly with these training sessions. You see, he was the sound man for the Embers. (For you young sprouts, the Embers are a major beach music band founded in 1958 and still performing today. For you West-Coast-ers, beach music includes the Drifters, the Temptations, etc.; not the Beach Boys, who are classified as surfer music.) This sound man had an incredible ability to make any competent band sound great. He also had the ability to communicate aural textures by choosing appropriate words. Everybody knows what a “disco bump” or “thump” is, but how often do we tell our clients/customers what to do with the EQ to get that sound? M could not only do that, but he could also come up with names for other parts of the musical spectrum that people could remember, and show them how, for example, to boost the extreme highs to add “sheen” or the 250-Hz region (gently) to add “warmth”. All this in spite of his hearing that essentially stopped above about 7 kHz, due to his having played with rock bands for many years.

But aside from M’s ability to communicate sound textures, he also excelled, as I mentioned, in making the mix sound its best. He did this by being an excellent listener, and by knowing his limitations. If he suspected that the high-frequencies on the crash cymbal needed tweaking, but the range involved was above his hearing limits, he would ask one of the younger band members for an opinion. You will no doubt perceive that M observed the band members and listened closely to their comments, so that he had a pretty good idea whose ears could be trusted.

On the other side of the coin, there was the church for which I designed and commissioned a sound/video system some years ago. At the first worship service, the sound committee, band, building committee, contractor, and I were all ecstatic about how well the performance met our goals of even sound coverage and natural sound, along with excellent speech intelligibility. A couple of months later, the new Crest mixer developed a faulty circuit board in the master section, and while I was checking things out, the building committee chairman asked me to review the sound guys on their training, as there were now complaints about sound quality. As soon as I looked at the mixer, I saw the problem: there was about an 8-dB boost near 4 kHz in every mic channel. Upon asking a few questions, I confirmed my suspicions—the new chief sound operator was a very dedicated, fine young man, whose job regularly exposed him to loud impulsive sounds. Figure 1 shows the Fletcher-Munson “equal-loudness curves”, which show the SPL needed at various frequencies to sound equally loud for a person with normal hearing (“normal” for a late-teen or young adult). 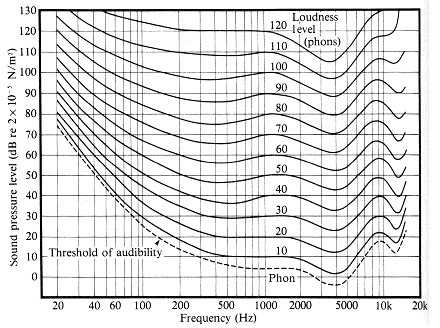 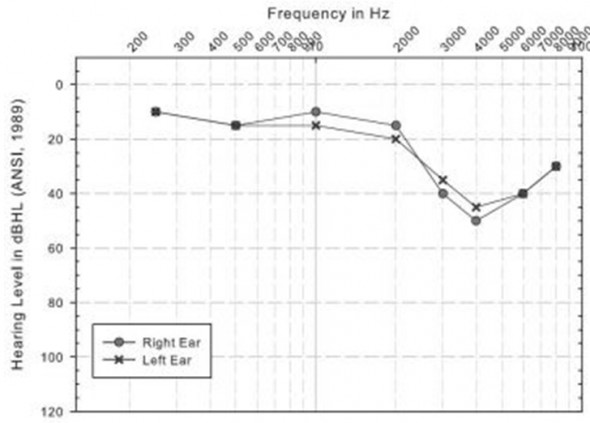 Article – Noise-induced hearing loss: The case of the 4 kHz notch. July 17. 2012
What happens is that the outer ear provides a resonant boost to frequencies in the 2-3 kHz range. There is a phenomenon known as the “half-octave shift”, which refers to the fact that the maximum displacement of the cochlea occurs about a half-octave above the frequency of maximum SPL, which puts the maximum cochlear displacement about 4 kHz. So our friend the chief sound tech had a problem that was all too common. (How often have you heard amplified music that sounded harsh or shrill? Our friend is certainly not the only sound tech with the 4-kHz dip problem!)

So what’s the answer? When we have a physical limitation, we develop adaptive behaviors. We’ve already discussed one that M used: cross-checking with other listeners. There is another one whose importance cannot be over-estimated: Listening to live music, preferably live acoustic music. By doing that, we become accustomed to what “natural” sounds like with our hearing limitations factored in. All too often, we compensate for our limitations by boosting the EQ in our live- or recorded-music systems, so that the music sounds as nearly as possible like it used to when we were younger and all was right with the world. If we do this, we will have little hope of EQ-ing a live mix that sounds good to listeners with normal hearing, because we will be accustomed to hearing “compensated” music.

I had two musician friends, each a couple of decades older than I, who suffered from high-frequency hearing loss—one, from years of playing with Stan Kenton’s orchestra; the other, from a childhood strep infection. Both had excellent sound systems (mono, at the time): Fisher, Electro-Voice, Dynaco, etc. But both systems were painful for others to listen to, because the highs were so heavily boosted. Our chief sound-tech friend did the same with the church sound system.

Bottom line: all of us who ever mix sound need to be as aware as possible of our hearing limitations; we need to stay calibrated by listening to music unmodified by artificial processing that attempts to compensate for any hearing loss we may have; and we need to cross-check our mixes (preferably during rehearsals) with other good listeners. rh