In this article, Richard Honeycutt looks at some advantages to designing a sound systems using horns.

“What’s wrong with our sound system?”

When I am engaged to answer that question, I often find that the main issue is speaker aiming. Having recently posted a series of blogs on steerable one-box line arrays, I will concentrate this one on horn systems. First, some general facts about speakers using horns.

There are only a few all-horn systems on the market. Even these cannot provide significant directivity below a certain frequency. In May 2010, Charlie Hughes wrote a fine article discussing the physics and practicality of this aspect of speaker behavior. (http://www.synaudcon.com/site/articles/understanding-horn-directivity-control/ )

Most of the speakers we use in our system designs have a direct-radiator low-frequency unit and a high-frequency horn. Some of the more expensive ones are 3-way, and use separate mid- and high-frequency horns. It is wise not to expect much directivity from a 2-way system below about 800 Hz (perhaps 500 Hz if the LF unit is a 15″ driver). When you want to see the effects of the nominally rectangular directivity (90 deg x 40 deg, 60 deg x 40 deg, etc.), you need to be looking at frequencies above the horn crossover, and where the horn is physically large enough to exhibit directivity. In the examples below, the plots were done for 4 kHz, to clearly show the effects of directivity.

For every combination of room and speaker, there is an optimum speaker height and aiming angle. We will start by looking at the coverage of a nominally 60 deg x 40 deg speaker in a room 40’W´62’L´25’H. Figures 1-4 show the coverage of this speaker when mounted 10′ from the front wall of the room, and 10′ high. In all cases, the speaker is aimed at the right-to-left center of the room. The vertical aim angles are 0 deg, 5 deg, 10 deg, and 15 deg below horizontal. 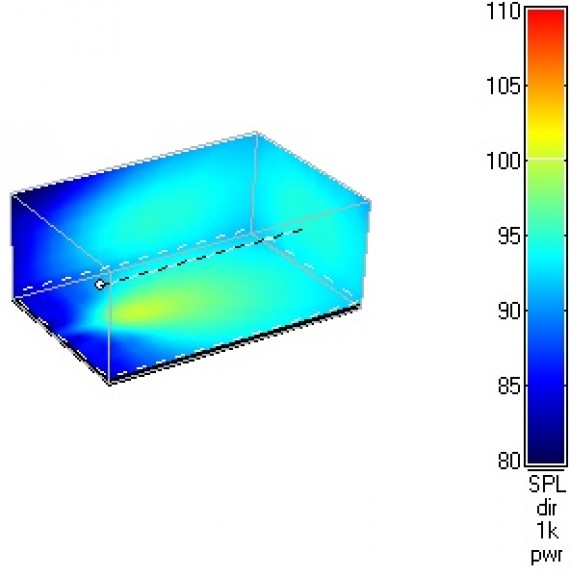 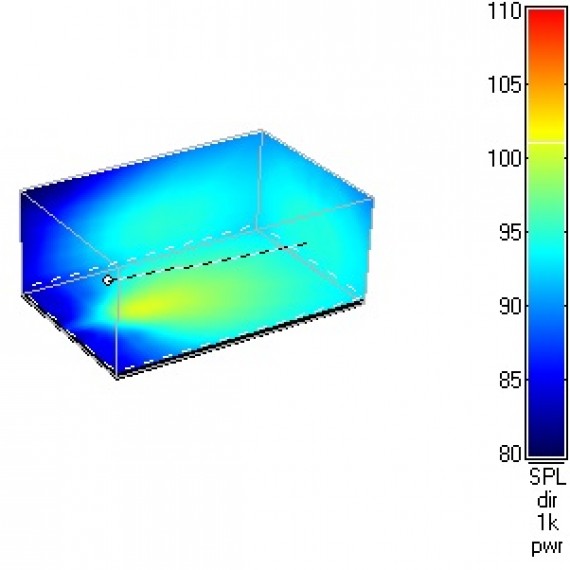 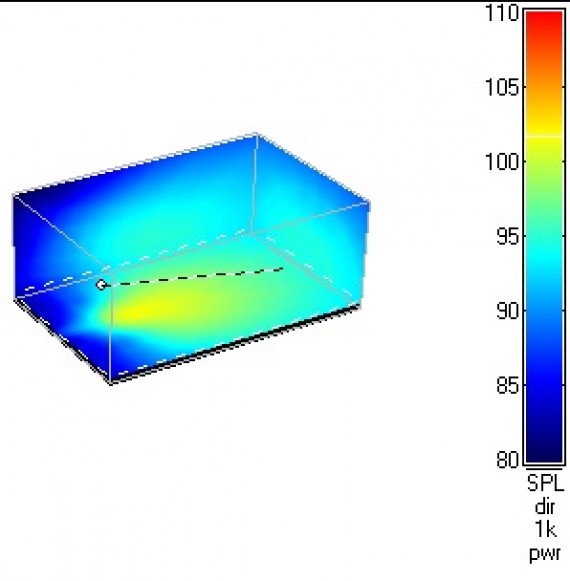 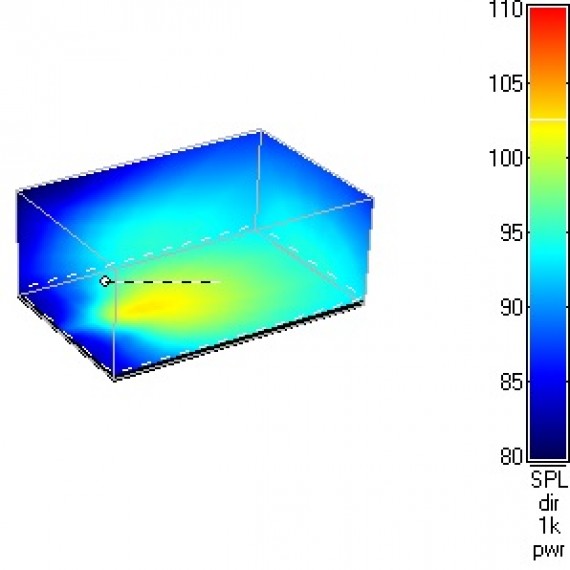 Notice not only the sound coverage on the floor, but also how much sound is spilled “lighting up” the walls. Although the coverage in the seating areas is most even when the speaker is aimed at 0 deg, this is the worst condition for wasting sound on the walls, decreasing the direct-to-reverberant sound ratio and also speech intelligibility. In addition, unless the back wall is very absorptive (4” fiberglass), the slap echo will be horrendous. This is the way speakers are aimed in high-quality cinemas, but they do have very absorptive walls. For this particular speaker, mounting height, and room, aiming 15 deg below horizontal is probably the best solution.

The plots shown so far are only for direct sound. If we add in the reflected sound, the evenness of sound coverage improves. This can be seen more easily if we look only at the floor or audience area (Figures 5 and 6—15° down vertical aiming angle). 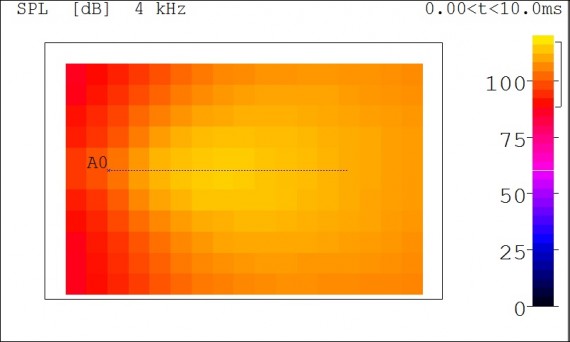 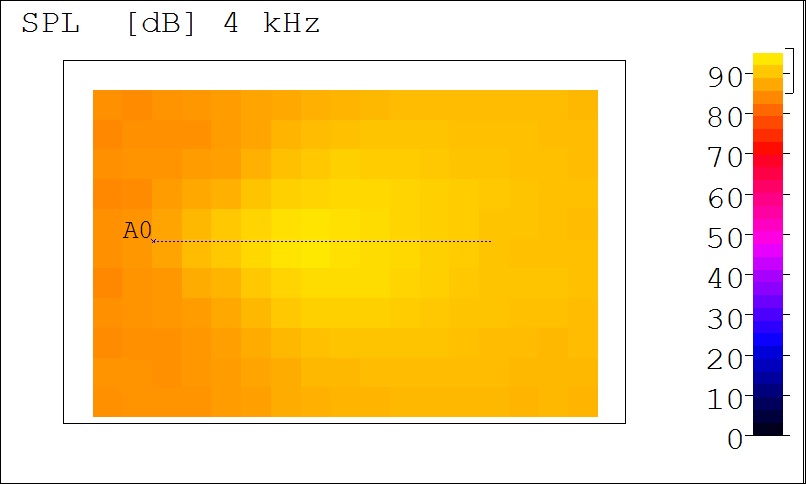 One way to widen the coverage near the front of the room without spilling even more sound on the side walls at the back is to use a speaker incorporating an asymmetrical horn. Figures 7 and 8 show the performance of speakers using two very different designs of asymmetrical horns in this same room. In Figure 7, the horn is mounted in the same position, and with the same vertical aiming angle, as the speaker in the previous examples. In Figure 8, the different design of the speaker requires it to be hung higher and aimed at -30 deg. The floor sound coverage is shown in Figures 9 and 10. All of these show only direct sound. 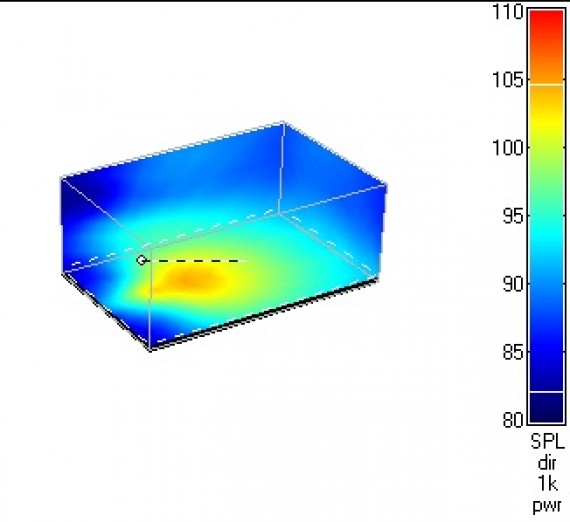 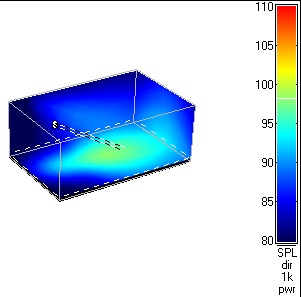 Notice that both asymmetrical designs keep the sound off the walls more effectively than the speaker whose performance was shown earlier. However, while Figures 9 and 10 show that the first design provides the most even direct sound coverage, the second speaker can concentrate the sound more effectively on the listeners. This is where the sound-system designer must work for his living! 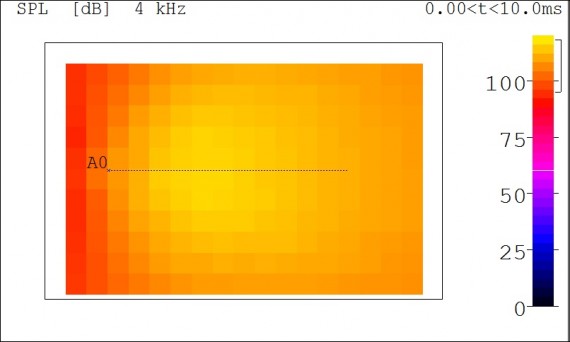 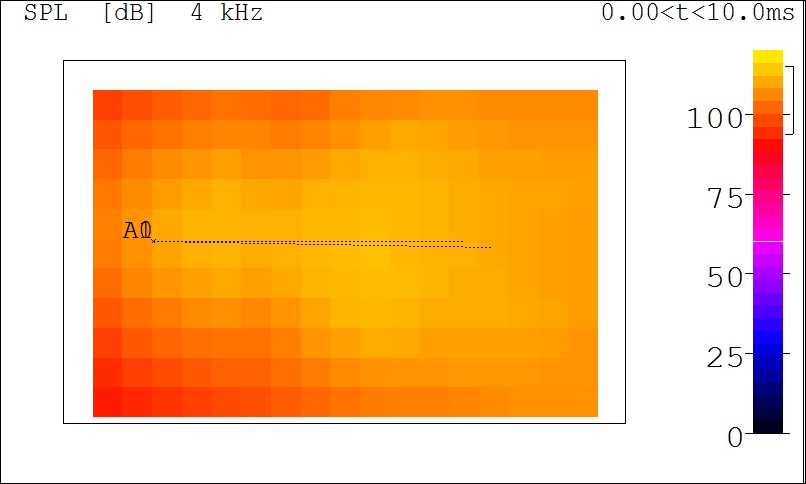 In this simplified example, the walls and ceiling are modeled as plaster, and the floor is modeled as an audience in moderately upholstered chairs. Different wall treatments would give very different results when reflections are taken into account. Also, probably the most effective way to evaluate the effects of sound hitting the walls is to look at definition (D50), clarity (D80), and speech intelligibility (%ALcons or STI). Carefully done auralizations can also be helpful. As in most engineering tasks, properly designing the speaker/room interface involves a careful determination of goals, and then usually some degree of tradeoff between the ideal and the possible. Catch phrases like “keep all the sound off the walls” and “keep seat-to-seat SPL variation below 1 dB” may seem good, but they fall flat in the face of reality. Knowing the behavior of different speaker designs, and then modeling the results in your space, will lead to optimum results. rh