This article will help you understand Acoustical Scattering.

As we all know, sound propagates as a wave. But under certain conditions, we can simplify our analyses by pretending that it moves as particles or rays. A wave has no specific position, whereas a particle does. A ray is the (assumed) linear path of a particle.

For many years, acoustical analysis was limited to statistical approaches such as Sabine and related RT calculations, and manual ray-tracing (geometrical acoustics), which involved a drawing table, straight edge, protractor and pencil. Even today, I occasionally revert to the modern version of these old tools (a CAD program) when designing the contour of a reflective ceiling or ceiling “clouds”. 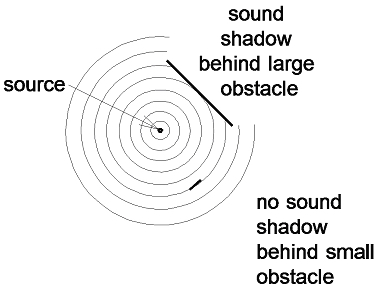 In the figure, the circles represent wavefronts. Notice that there is no blocking of the wavefronts by the small obstacle. Diffraction cannot be completely simulated by geometrical acoustics, although there are mathematical methods for approximating diffraction effects.

A related acoustical phenomenon is scattering. Scattering is the specular reflection of a wave from small segments of a rough surface. Like diffraction, scattering results in sound going into locations that would not be predicted by geometrical acoustics. Since usually we do not know details about the small reflecting planes of a rough surface, we treat scattering in geometrical acoustical analyses by using a scattering coefficient which tells us the fraction of the incident sound that is not specularly reflected. (There is also a diffusion coefficient, which expresses how evenly the incident sound is scattered, but this is beyond the scope of this blog.)

We would really like to have a data base of scattering coefficients for all the materials we use in our models. I am the beneficiary of something like this, in that one of my mentors gave me a copy of his CATT materials tables.

A few examples of scattering coefficients from his data base are listed in Table A. 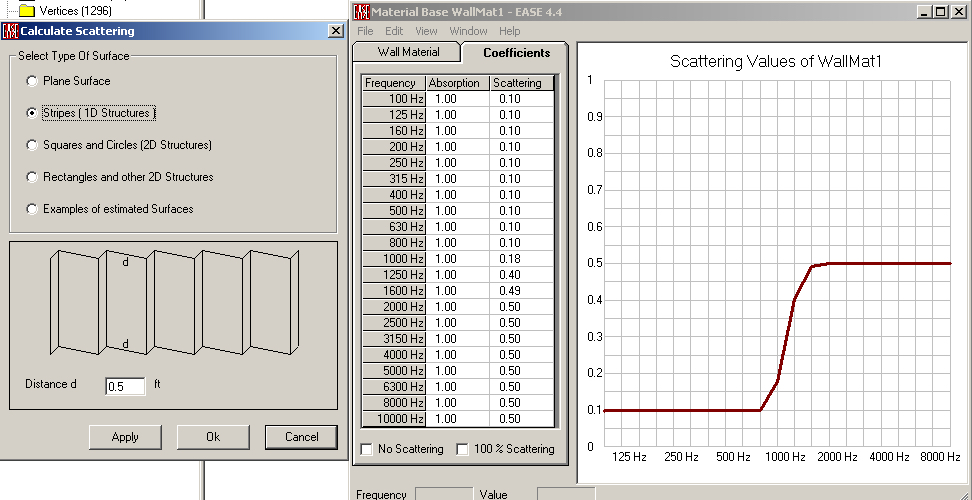 EASE incorporates an algorithm for estimating scattering. To invoke it, the user must access a material data file and then select Edit|Calculate Scattering. After selecting the type of surface (plane, stripes, etc., as shown at the left in Figure 2), the user then enters the appropriate dimension (0.5 feet in the example shown). The calculated scattering coefficients are then entered into the material file and graphed on the screen. You will notice that scattering becomes very significant at frequencies where the wavelength is roughly equal to the specified dimension. In this case, if we think in terms of d/λ, where d is the dimension entered for the calculation, scattering becomes significant when d/λ is about 0.5, and is maximized at frequencies at which d/λ is > unity.

It can be instructive to look at the calculated scattering for the “examples of estimated surfaces” in the EASE Calculate Scattering panel.