Curts explains that “Looks About Right” frequently does not work when choosing loudspeakers for a small church.

I coined a phrase circa 1989 known as the “Looks About Right” approach to sound system design. It denotes any design effort that simply “guesses” at where a loudspeaker might work well, lacking any effort to prove it out with the design tools so readily available. Of course it needed an acronym, and soon became known as the LAR factor, and was even included in one of the chapters that I wrote for the Yamaha Guide to Sound Systems for Worship, released in 1990.

Spend a few minutes reviewing online church technology forums and you will discover that audio mythology is alive and well – more in some circles than in others. Sadly, there is a rabid audience for such misinformation. The folks that spin this stuff aren’t intentionally trying to mislead anyone. In fact they think they’re doing a good thing. They just don’t know what they don’t know.

One topic that came up recently exemplifies a common issue in churches. A person was seeking confirmation of a design concern that he had for a small church. The church had already purchased some loudspeakers, and his concern was that given the room dimensions and ceiling height, that listeners seated toward the back might not hear the sound system very well.

Individuals quickly jumped in with their LAR solutions. To summarize the LAR advice, “The room is too small to warrant delay speakers, just put up a couple of speakers on sticks near the stage and you’ll be fine.”

A handful of others tried to offer counsel that a deeper study was warranted, lest the church waste their funds on a system that would not meet their expectations. But those efforts fell on deaf ears. 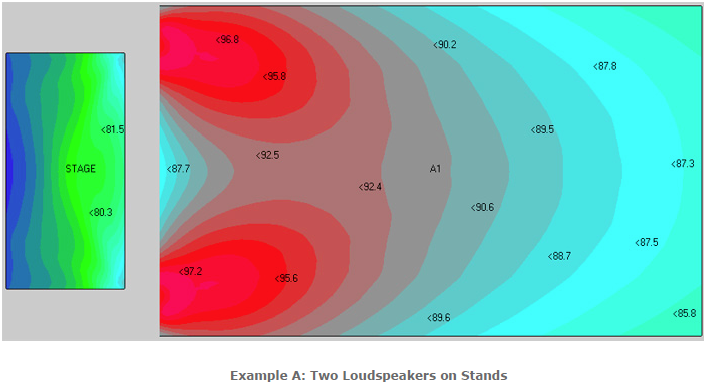 Example “A” shows the direct sound coverage at 4kHz that one might expect with the loudspeakers positioned to either side of the platform, in this case mounted on speaker stands at 7 ft AFF. This was the approach advocated by the LAR group.

As you look at the sound coverage, note that the brighter the color the louder the sound. So “red” means really loud, and “blue” means softer. Each isoline represents a 1 dB change in sound pressure level.

Note that this is a computer simulation, and in this case shows just the direct sound energy centered at 4 kHz. In real life, the listeners would hear the direct sound combined with the sound reflections and echoes. Having built literally hundreds and hundreds of these models, and getting to experience the real life results after the installation was complete, I can tell you from firsthand knowledge that the models are really quite accurate. If the model reveals an acoustic issue at some point in the room, and if the system gets installed according to the details in the model, that problem WILL be there in real life. You can expect to walk over and listen to that issue when you stand in that room. 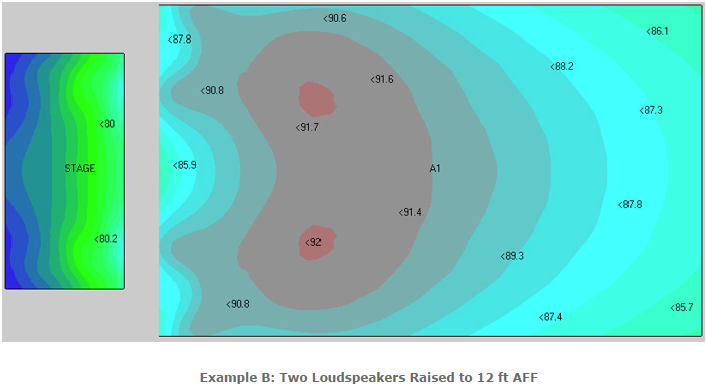 Example “B” raises those loudspeakers to 12 ft AFF, and drops the pitch so that we’re aiming at listeners seated in the back row. Note that the sound coverage is much smoother. Why? It’s simple geometry and God’s laws of physics at work. Raising the loudspeakers lessens the difference in distance from the loudspeaker to the listeners down in front as compared with the distance to listeners seated in the back, and therefore lessens the disparity between the sound level across the seating area, evening out the sound coverage. 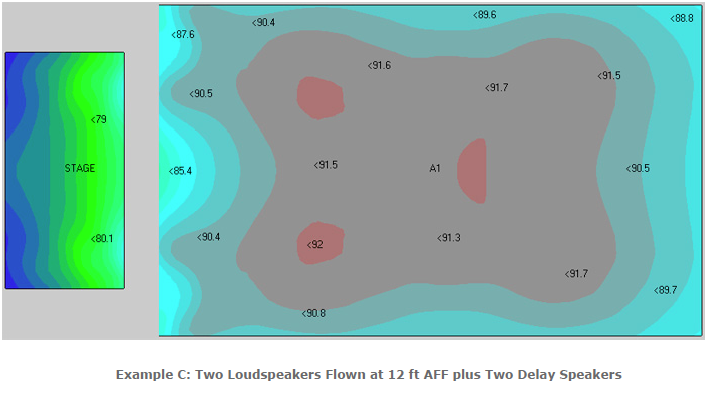 Example “C” is the same as “B”, but adds two delay speakers halfway back into the room specifically to extend coverage to listeners seated in back. If the goal is achieve even coverage across all listener seats (and given an adequate budget that should be the goal), then Example “C” is clearly the preferred solution.

Will folks seated in the back hear without the delays? Sure, but clearly not as well.

Now think about this for a moment. Let’s say that the church has a minimal budget to work with. They can only afford two loudspeakers. They can choose to put those two loudspeakers on speaker stands to the side and just in front of the platform. The result will be that listeners seated toward the front will get blasted, and those seated towards the back may strain to hear.

But the good news is that such a scenario could be set up as a live demonstration, allowing the Owner to determine with their own ears in their own auditorium if that solution is appropriate for their needs. If they agree, then you just moved from “Looks About Right” to “Sounds About Right”, and your design is done.

On the other hand, for literally the same amount of money they might consider suspending the loudspeakers from the ceiling and enjoy much more even sound coverage across the listener areas, especially in the front one-half of the seating area. That takes a little more effort to demonstrate live, but it can be done.

Of course for many churches, flying the loudspeakers may not be a reasonable solution. That is especially true for those that operate as a portable church, or that rent their meeting space.

My advice is … stay alert! There is regrettably a lot of misinformation about sound system design (and other topics) shared via the Internet, in most cases parroted by a person whose only mistake was to mislearn something from someone, who mislearned it from someone else. But when those mislearned concepts get spread around as fact, they can lead to a lot of really bad sound systems. And so it goes.

As much as you can, please help us stamp out audio mythology. If someone makes a blanket statement online about some technical “fact” that you know isn’t right, don’t let it stand. Challenge them to show the proof. One or both of you will have a teachable moment.

Curt has taught literally thousands of church sound team volunteers, technical staff, worship pastors and musicians. Having made his living as a professional musician for 12 years, earning a Bachelor of Music degree in Music Engineering from the University of Miami, serving 11 years full time on the production staff of three churches as Audio Director and Technical Director, plus several more years as a sought-after freelance
sound engineer, and now focusing his career on designing state of the art sound, video and theatrical lighting systems for churches nationwide, Curt brings a unique perspective and depth of knowledge to every AVL system he designs and every workshop he teaches.