This article will go in several different directions. These will include

In February of this year, I was part of an ambitious beam-steered line array comparison. It was orchestrated by Steve Ginensky of Array Control Technologies at Techny Towers, just outside of Chicago. The outside temperature was bitter cold, but we were inside, locked in a reverberant cathedral with 8 contemporary beam-steered line array loudspeakers. Each was staged by their respective manufacturer at a specific point on the stage, one-by-one. Each was measured at the same positions on the cathedral floor. The measured room impulse responses (RIR) produced speech intelligibility and speech clarity scores, as well as convolutions for listening to each. Here’s a link to the article. It was ambitious, tedious at times, and we learned a lot. But this article really isn’t about that. 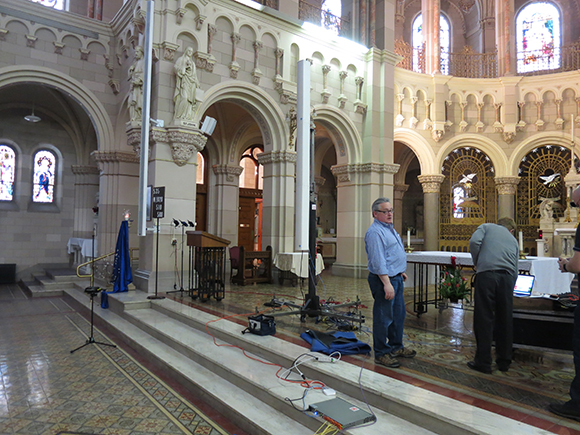 Photo 1 – Steve Ginensky (blue shirt) standing near an array positioned at ground zero. The array to the left is the permanent house system. The DML was placed at the same location.

Not long after that, a discussion ensued on the SynAudCon Member’s Forum regarding an alternative loudspeaker technology – the Distributed Mode Loudspeaker, or DML. The specific device is manufactured by Tectonic Audio Labs. From the manufacturer:

At the heart of the Tectonic system is the Distributed Mode Loudspeaker (DML) concept that utilizes very small drivers to excite relatively large & rigid acoustic panels. Unlike traditional loudspeaker systems, DML’s excite nearly randomly over a large surface at up to a six-octave frequency range. The net effect is a very large surface that radiates audio in a very wide and diffuse manner.

There is a list of claims from the manufacturer that include:

There are also plenty of testimonials regarding their performance, all of which are positive.

I’m a huge advocate of room modeling, so I always expect measured performance data on loudspeakers marketed for sound reinforcement use. The only reference I could find to measured performance data were links to AES papers on the manufacturer’s website. I could not find EASE or CLF data files, which for me are the litmus test for serious consideration of a device in an engineered sound system. This in itself does not negate any of the claims, but it makes it very difficult to evaluate the device and almost impossible to predict its performance.

I can sum up the Forum discussion by saying that it was a mix of the above – some glowing testimonials and some challenges to their validity, with little objective data to support either view.

That was the end of it, until Steve Ginensky decided to return to Techny Towers to evaluate one of the panels. He would duplicate the earlier line array study with a Tectonics PL-11 panel and collect some hard data by which to evaluate the device. I was invited, but not able to attend. At my request, Steve recorded some 14-second log sweeps at the measurement positions used for the line array study. These were on-axis at 20 ft, 40 ft, and 80 ft respectively. The recorded sweeps were processed into room impulse responses, which could then be processed to produce acoustic metrics and convolutions for an apples-to-apples comparison with the devices from the previous investigation.

I updated the data matrix from the February session with the measured data from the PL-11. You can download the PDF and play the files for yourself to draw your own conclusions (Adobe Acrobat required).

Some Observations by Proxy

Again, I was not actually present for the demo, but the measured RIRs and convolutions provide sufficient information to examine some of the claims about the device, and whether or not they are supported by this data set.

Very Wide Coverage Pattern – Supported. This can be evaluated by simply listening to the RIRs in the data matrix. The Tectonic produced significantly more room excitation than the other devices, including the reference Dodecahedron loudspeaker.

Minimal Room Interaction – Not-supported. The reverberation times in the octave bands above 1 kHz were significantly longer (more than 2x) those produced by the dodec. Since RT is a function of the room, not the loudspeaker we can say that the longer RT for the PL-11 means that it produced a higher intensity reverberant tail than the dodec and the “correct” RT for Techny – something that the less intense lobing of my (expensive) dodec could not do. The holy grail of loudspeakers for RT testing is the one that can uniformly excite the entire space. A comparison between the RIRs does not reveal any significant difference in nature of the specular reflections produced by the DML vs. the other loudspeakers. Techny is a very diffuse space, and perhaps not the best venue for this assessment.

Superior System Intelligibility – Not-supported, at least by any objective measure. The Speech Transmission Index and C50 scores were similar to a human simulation loudspeaker (NTI Talkbox) at 40 feet, and were the lowest of all devices in the line-up at 80 ft. The convolutions seem to support this. This means that a single PL-11 produced no intelligibility advantage over a loud talker. Certainly an array of PL-11’s would have fared better against the beam-steered line arrays, but a single PL-11 did not produce usable speech intelligibility beyond the 20 ft measurement position. A more apples-to-apples comparison is with the completely passive Danley SBH 10, which produced much higher intelligibility scores at all three test positions. Wide coverage is a two-edged sword. You can cover a lot of seats, but unless the pattern is constrained in at least one plane (e.g. a line array) you also produce a lot of room excitation and a lower direct-to-reverberant ratio.

Figure 1 – Overlay of the broadband RIR of the Tectonic PL-11 (blue) and the Danley SBH 10 (red). This was the 40 ft measurement position. The RIRs are normalized to 0 dBFS and offset in time.

First, I want to call attention to the fact that the data for this study resulted from a very simple process – the recording and post-processing of some log sweeps in the space. Every time we break out the instrumentation, regardless of price, pedigree or sophistication we get the best room data from this process. Cost is not a barrier to making good room measurements.

Kudos to Steve Ginensky for his effort and expertise in conducting the demo. These things take time, and time is money. We are all the beneficiaries of such studies.

A measured RIR speaks volumes about the loudspeaker and room. That’s why I didn’t write volumes here in an attempt to fully interpret the data. You can do that yourself. You can open the RIR wave files in any good measurement program and post-process them at your leisure. This is the value of using a measurement program that supports the WAV file format.

I am admittedly skeptical regarding testimonials. Why? People who take placebos can get better. Objective loudspeaker comparisons are difficult to stage, and lacking an objective reference “different” usually means “better” especially if you want it to be better. That’s the human condition. The use of the RIR and convolution is in my opinion the best way to compare loudspeakers on a level playing field. It is the only possible way of listening to different loudspeakers under exactly the same conditions, and even on different dates.

As claimed, the DML panel did indeed produce a different reverberation characteristic in the space than the other devices, but it was more, not less room excitation. This was objectively verified, but it isn’t necessarily a bad thing. We have known for decades that a diffuse reverberant field is potentially less destructive to speech intelligibility than late arriving specular reflections. This supports the subjective claims that the DML produces a “different” overall sound than traditional loudspeakers, and depending on your motivations different can mean “better.” The diffuseness of the reverberant field produced by the DML is indisputable.

At the end of the day, what matters is what it sounds like. If you prefer one source type over another, then go for it. That’s the artistic side to sound reinforcement. On the other hand, today we have venues that must meet certain measured STI criteria. In such spaces “subjectively good sound” is not sufficient. The performance must be predictable at the drawing board, and the finished system has to produce a minimum intelligibility score as measured with instrumentation. It is this objective aspect of sound reinforcement that keeps things in balance.   pb