The October SynAudCon seminar in Chicago provided an opportunity for another “Techny session.” Techny Towers has become our “go to” room for direct-to-reverberant ratio studies. It is large, reflective, diffuse, and has a mixing geometric shape – all of the requisites for Sabine’s original formula. We have performed two other studies a Techny – a comparison of active beam-steered line arrays, and the measurement of a distributed mode loudspeaker (DML).  Now it is time for a passive line array study.

Photo 1 – Techny Towers, outside and in.

This time around we decided to test a lineup of passive line arrays – the so-called “sound column.” These devices are much simpler than their active cousins tested in our first Techny session. The devices in this line up were chosen mainly due to their availability. We are not saying that they are equivalents. This was not a shoot out. Also, these short arrays would have to be used in zoned multiples to cover the main floor. A single source solution would require a much longer array, such as the house system (JBL/Intellivox DC500).

Steve Ginensky of Array Control Technologies arranged for the use of the room, and provided some of the devices to be tested. His line-up included a JBL CBT70J, CBT70JE, CBT100, CBT200, and an Intellivox V90. I added some devices that I have on hand – a Bose MA12 and a Frazier CAT2X7.

SLS Loudspeakers was in town doing some product demos, so their CPC1212 array was also included in the line-up. It is taller and has more processing than the other devices, and probably belongs in the study of active line arrays. But, one of the beauties of this kind of study is that apples-to-apples comparisons can be made at different times, so long as the room hasn’t changed.

The Intellivox V90 has a built-in -4 deg vertical aiming angle. Given the stand height, only Test Position 1 (6 m) is in the main lobe. This is quite apparent in the convolutions. The other two test positions are included, but only to show what happens if you don’t mount the array at the proper height for the farthest listener – a very common installation error. 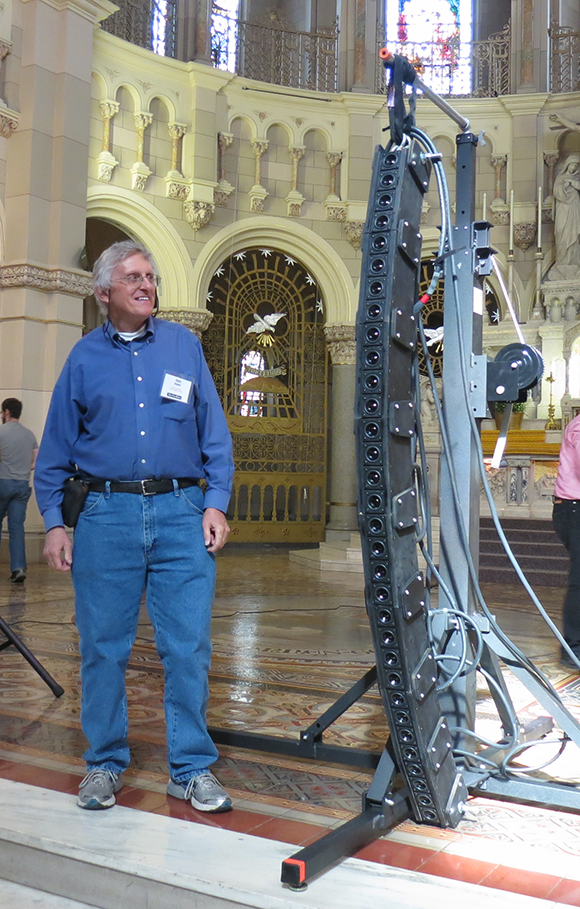 The device that motivated the session in the first place was a prototype Constant Beamwidth Transducer (CBT) array by D.B. Keele, Jr. Don is the first person to utilize CBT technology for loudspeakers. It originated as a transducer technology for the US Navy. Don and I have been trading predicted data for his CBT’s for a few months, and I did full balloon measurements of a small prototype. When I suggested that we test that unit at Techny in conjunction with our Sound Reinforcement for Technicians seminar, Don decided to build a larger prototype that would be more suitable for the large space. He partnered with Hugh Sarvis (Worx Audio) to produce the modular CDL32, a 32-element semicircular array that was driven by four amplifier/DSP channels to provide the required level shading. The CDL32 is an array composed of eight individual flat-front boxes, each of which houses four 2” drivers, which form a 60° segmented-arc constant-directivity array that provides a 45° vertical beamwidth.

CBT arrays have some interesting and useful properties that include:

Our Techny session was a great opportunity to get some exposure to CBT technology, hand-in-hand with it’s inventor, DB Keele, Jr. His CDL28 represents the textbook approach of a semi-circular array. JBL’s CBT line-up are straight columns that use passive filtering for the shading and timing. Here’s a link to everything you need to know about CBT’s, including technical papers and presentations by Don.

The planning began in September. Don and Hugh would provide the array, I would provide a crank lift and the instrumentation, and we had another Techny session on the schedule. The other passive devices were added to make the most of the day. 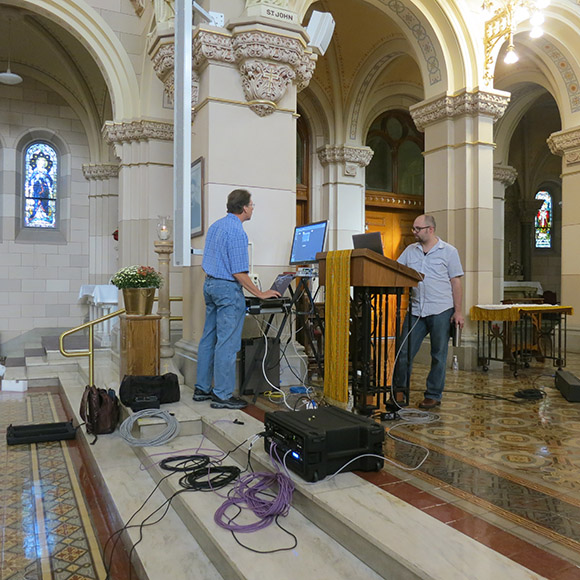 My measurement procedure duplicated what was done at the previous Techny sessions. Log sweep recordings were made on-axis at 6, 12, and 24 m. These were post-processed into XY room impulse responses (RIR) using GratisVolver. I also collected IRs at the same positions using an omni measurement mic and RoomCapture software.

My measurement recorder was an iPod Touch with Rode XY Cardioid external microphone. This duo lives in my backpack, along with an iPod Nano. Like a smartphone camera, its always on hand. The recordings are as good or better than a dedicated recorder, and I have the option of using other microphone capsules if desired.

Each loudspeaker was mildly equalized for a flat axial response (~6 dB window) from 200 Hz to 10 kHz (direct field only) at the 6 m position. No effort was made to make them “sound the same.” They should not be considered equivalents that are suitable for the same applications.

Aaron Johnson was on hand with his Smaart 7™ rig to collect another data set at the same microphone positions. Between his rig and mine, we had all the data needed for the study.

The data was collected and post-processed to produce a data matrix. The matrix includes the following for each device at each measurement position.

Of course, with the IRs provided below, the user is free to investigate as they see fit. The wave files can be opened and post-processed by any mainstream measurement platform. GratisVolver™ can be used to convolve them with other types of program material.

Figure 1 – The data matrix (graphic only) for Test Position 3. The links are active in the PDF (Adobe Acrobat).

I used this study as an opportunity to demonstrate the new version of GratisVolver. Version 1.5a provides a routine for calibrating the RIRs and convolutions for playback. The earlier version produced correct convolutions, but always normalized to full-scale. This caused the direct field level to stay the same, but the reverberant field level to increase as the measurement distance was increased. This is the opposite of what happens in an actual room. With calibrated RIRs, the reverberant field level is the same for each measurement position, and the direct field reduces with increasing distance. This correctly emulates what a listener experiences as they move farther from the loudspeaker in a reverberant space. The instructions for producing calibrated RIRs and convolutions are in the GratisVolver Help file.

The use of the room impulse response and convolution is the only practical way to make apples-to-apples comparisons between loudspeakers. So long as the space doesn’t change, one can even compare data sets made months or years apart. There are some important things to remember about this study. The STI and C50 metrics can vary depending on the details of the RIR and the instrumentation used. They are also sensitive to the microphone pattern, and can be significantly different for omni vs. XY cardioid. If you import the same RIR into 3 different measurement programs, you will get slightly different scores. This is the nature of measurement and acoustics and we just have to accept that. This is why listening, both live and by convolution, remains the most useful method of RIR evaluation.

I’d like to thank all who participated in the session, include Brenda for her fine photography. Steve Ginensky is always the force that makes these sessions possible. I look forward to the next one.   pb 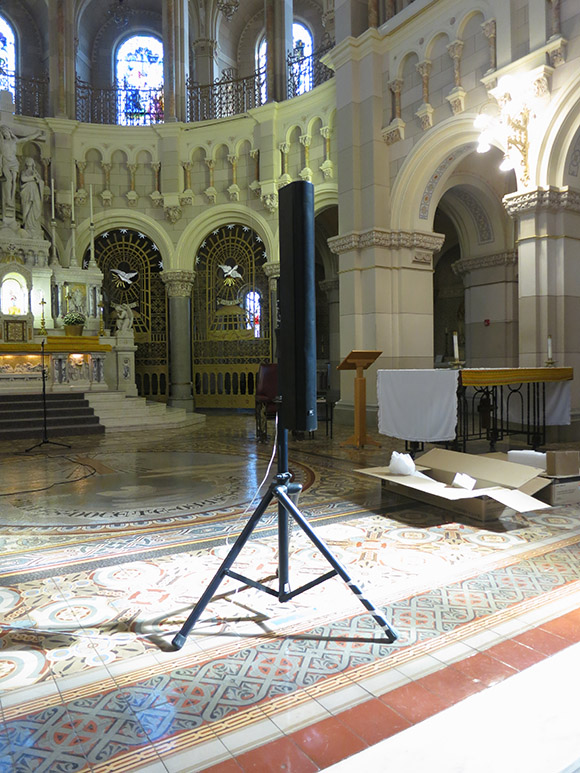 The JBL CBT100 at measurement position. 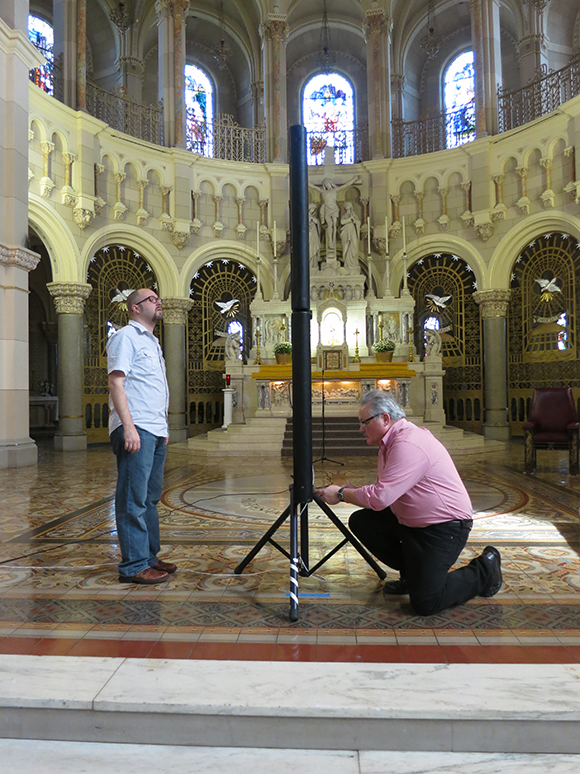 Aaron and Steve ready the CBT200. 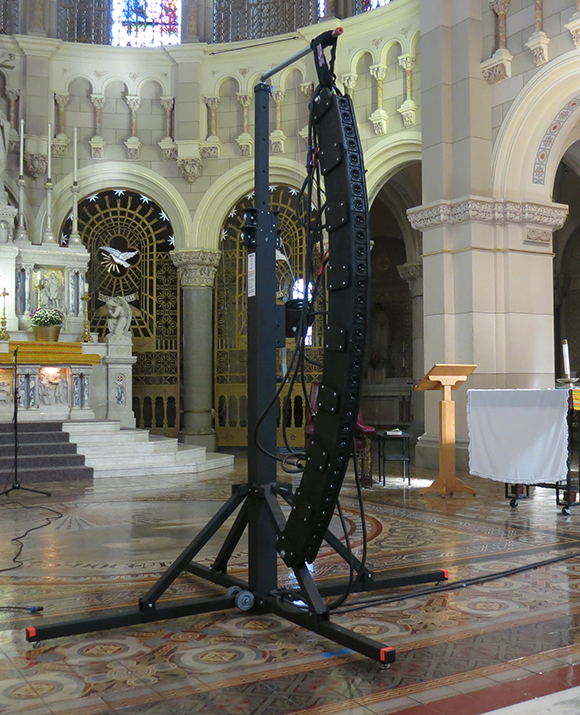 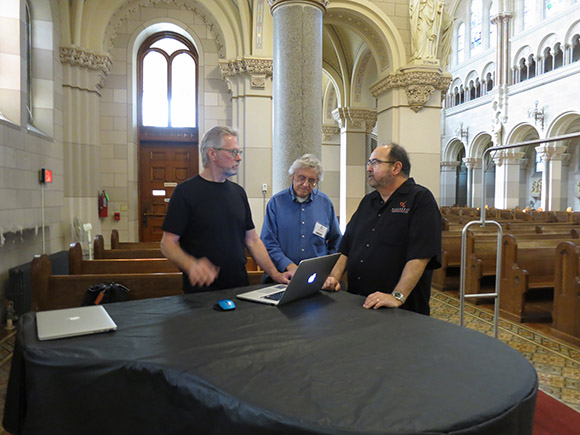 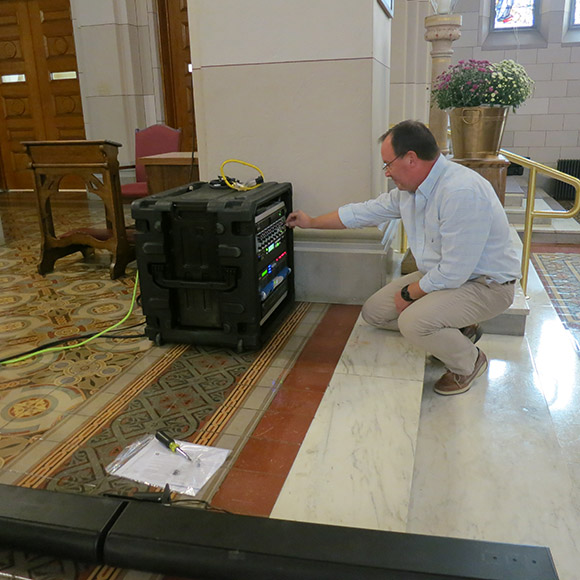 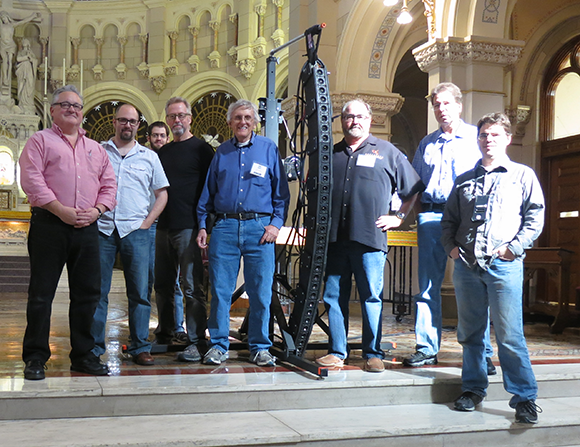 It takes a lot of gear to do a Techny session!