It’s been over 100 years since Wallace Clement Sabine sculpted his famous reverberation formula for estimating the room reverberation time from a handful of variables that include the room volume, surface area, and the “alpha” of the material covering each surface area – the so-called absorption coefficient. Multiplying the alpha by the surface area yields the Sabins of absorption. His formula worked well for the space in which he derived it – the Fogg Lecture Hall at Harvard University.

While the formula established Sabine as the “father of architectural acoustics,” the formula was quickly found to be quite conditional. The accuracy varies wildly with rooms of different volumes, shapes, and Sabin content. Modified versions were produced by Eyring, Fitzroy, and others, but the take-away is that RT formulas provide estimates, at best. Recommended further reading is Leo Baranek’s scholarly paper on the subject.

Four major conditions for reasonable accuracy of the Sabine equation include:

Very few rooms meet the criteria for even reasonable accuracy of Sabine’s equation. That fact does not keep many modern practitioners from banking on the formula and using it to prescribe room treatment for difficult spaces. A recent thread in the SynAudCon Member’s Forum reinforced the problems with using the Sabine equation in small spaces, such as control rooms, studios, etc. It is also important to remember that absorption coefficients have similar accuracy issues for the same reasons. The absorption of a material depends on the sample size, sample shape, room size, placement, and other variables. Published coefficients are estimates at best.

Even with the conditions and inaccuracies, the Sabine and Eyring equations provide a very useful “first look” at the acoustics of a large space. They provide a benchmark that the results of more sophisticated approaches, such as ray tracing, can be compared to when formulating the approach to a system design.

Rather than write more about where the Sabine equation doesn’t work, I’ll present an example of a room where it can be expected to work reasonably well. Techny Towers is our preferred location for direct-to-reverberant ratio studies. Three “Techny Sessions” have been conducted in the space, including a line-up of beam-steered line arrays, a distributed mode loudspeaker, and a line-up of passive sound columns. SynAudCon Member’s can login and search for “Techny” to view these and other resources.

Techny could be referred to as a “Sabine space.” It serves as a reminder of the large errors that can occur when using Sabine’s formula with other room types.   pb 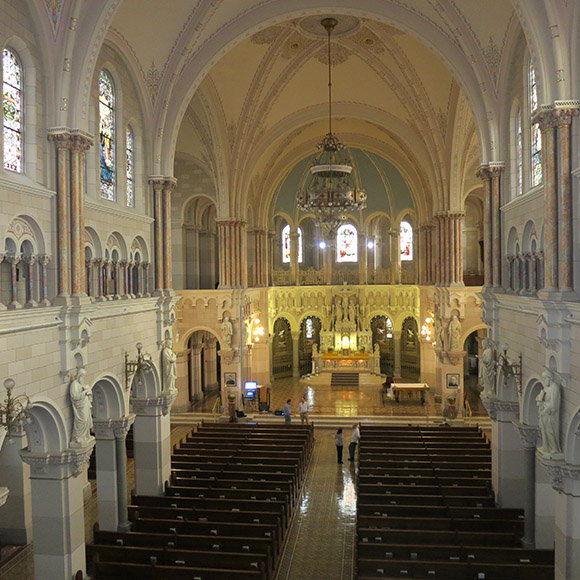