Of all the topics covered in SynAudCon courses, few are as misunderstood as “70 V” systems. Most people are surprised to find that these systems share many common traits as “direct” connected systems. The most important trait of these systems is the use of transformers on the loudspeakers (usually internal) to “step down” the signal voltage before applying it to the loudspeaker. This is necessary because the signal voltage is “stepped up” at the amplifier. In fact, at SynAudCon we prefer the term “transformer distribution system,” especially since they can be based on voltages other than 70 V.

The ratings and specifications are based on sine waves, but any audio signal can be played over the system.

Myths regarding these systems abound. Some are rooted in fact. Others are not. Here are some of the more common misconceptions about transformer-distributed loudspeaker systems.

This illustrates the difference between a “rated” voltage and an “actual” voltage. Audio signals are dynamic, meaning that they are only present when something is playing over the system. Contrast this to utility power distribution systems, where a voltage is always present at the electrical outlet. The 70.7 volt system gets its name from the RMS (think average) voltage of a pure tone (a sine wave) whose peak voltage is 100 V, which is the highest voltage that, by code, can be present on the line. So, feed a sine wave into the system and turn it up until the “70 V” amplifier clips, and you will read 70 Vrms on the line, which is 100 Vpeak. Substitute speech or music and turn it up until the amplifier clips, and you will read a far lower voltage (typically 1/3, or about 25 Vrms, depending on the program material). Play nothing into the system and there will be no voltage on the line, other than residual noise. 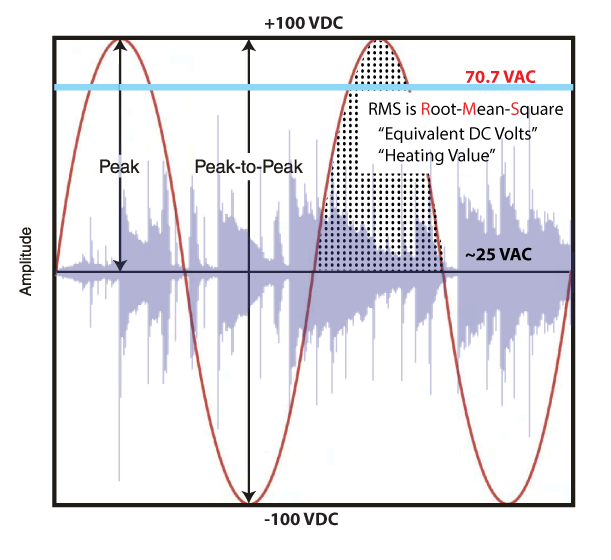 2. These systems have poor sound quality, and are only suitable for paging and elevator music.

This is an undeserved reputation. If you use good quality loudspeakers and transformers, these systems can have excellent fidelity, indistinguishable from conventional systems that use 8 ohm loudspeakers. It is true that there are many poor quality 70 V systems in use, but that is due to the factors that can make any sound system sound bad – poor quality products, poor design, improper calibration, or user error.

3. These systems are low frequency deficient because you can’t get “bass” through a transformer.

The transformers used in these systems do indeed saturate more easily at low frequencies, resulting in potentially poor bass performance. This can be remedied by over-sizing the transformers, or by simply high passing the system (filtering out the low frequencies). It is reasonable to expect good fidelity to about 80 Hz without taking special measures to extend it to a lower frequency (larger transformers, direct-connected subwoofer, etc.). Now, I don’t know about you, but I really don’t miss the very low frequencies when sitting in a meeting room, airport or restaurant. In fact, they can be annoying. They are not needed at all for speech systems. Music systems for most applications can still sound quite good if high passed at 80 Hz.

4. Due to the lethal voltages present on these systems, the wiring must be in conduit.

It’s not the voltage that is potentially lethal. It’s the current. The higher the voltage, the more current is “pumped through” something that finds its way into the circuit. It is best to treat these circuits with the same respect you would render an electrical outlet, even though in practice the voltage and available current are far lower. Many of today’s larger power amplifiers (1 kW and higher) can produce higher voltages than 70 V, along with many amperes of current. These are potentially much more dangerous than the typical 70 V system. None the less, keep your tongue off of the loudspeaker’s terminals and don’t use 70 V distribution for your hot tub loudspeakers without strict adherence to the electrical code.

5. You can’t install one of these systems unless you have an expensive impedance meter.

The impedance meter is handy, but not essential. In fact, the whole reason for the way that these systems are specified is to avoid impedance ratings and impedance measurements.

6. The system won’t work right unless there is 70 volts on the line.

Technically true, but why make it complicated? There is no practical difference between the two voltages.

8. These systems are only for “ceiling speakers,” and one shouldn’t mix/match loudspeaker types.

The 70 V system is just a means of signal distribution. It has nothing to do with the type of loudspeaker used. While 70 V distribution works well for ceiling loudspeakers, the amplifier doesn’t know or care about “what” or “where” with regard to loudspeakers. Do you have separate circuits in your house for toasters, TVs, and lamps? Of course not. These can all share the same circuit, so long as they don’t draw more current than is available. In the same way, it is perfectly acceptable to mix and match loudspeaker types on a 70 V line. In fact, it is one of the greatest benefits of this means of signal distribution.

9. 70 volt systems have lots of phase interference and comb filtering.

This “carpet bomb” approach to sound coverage works well for some applications, such as meeting rooms, airport gates, and clothing stores. A more surgical approach to coverage that minimizes phase interference is preferred for theaters, auditoriums, and studios.

That said, the interference has nothing to do with whether or not the loudspeakers are on a 70 V line. There would be just as much interference if each loudspeaker were 8 ohms and had its own amplifier.

That’s the easiest way to do it, but what you actually need is an amplifier that can produce the distribution voltage (sine wave rating) and the needed current based on the impedance of load, which in turn is determined by how many loudspeakers (and their power tap) that you daisy chain onto the line. The “70 V system” (and other standard distribution voltage schemes, such as 25 V, 100 V, etc.) assure that you can meet these conditions by simply adding the power taps and buying an appropriate amplifier.

Done properly, the transformer-distributed loudspeaker system is a nice arrow-in-the-quiver of the sound system designer. They have served our industry for nearly a century, and will likely do so for another. There is simply no other way to accomplish what these systems can do

If your system needs these attributes, transformer distribution is the way to go.  pb