In this article, Ike Zimbel shows ways to avoid intermod in wireless audio.  Scenarios included to drive home the principles. 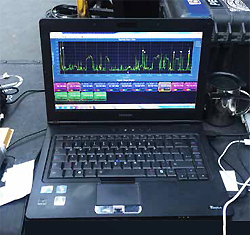 In today’s ever-more-crowded RF environment, wireless system users need every advantage they can get to make sure their show comes off without a hit.

While wireless frequency coordination is not a new thing, I find that many in pro audio are unaware of it. This article will explain what it is and what it does, and take you through some scenarios to show how you can benefit from it.

In its simplest form, wireless frequency coordination is a method for calculating these additional frequencies so that they may be avoided. While I won’t go into all of the math involved, the basic story is that two wireless transmitters will produce, below and above each frequency, new frequencies that are the same spacing as the two frequencies are apart. These new frequencies are called intermodulation (or intermod) products.

But these intermod products are only potential problems, because the transmitters have to be able to interact with each other to produce them. This usually means that they have to be in close proximity to each other. Does this get you off the hook? No.

Following are some scenarios of how this can bite you in real life, but for now, keep in mind that transmitters that are putting out a steady signal, like in-ear transmitters or intercom base stations, can interact with wireless mics, guitar packs, etc. that are in the same area.

You’re working with a rock band. Stage right and stage left both have guitar rigs, each with its own tech. Off stage left is monitor beach. The stage right guitar tech scans around and sets his guitar wireless system at 550.000 MHz. The stage left guitar tech does the same and finds a clear frequency at 555.000 MHz. The monitor tech scans, and then puts the singer’s IEM pack at 560.000 MHz and his vocal mic at 545.000 MHz.

Everything sounds clean, checks out fine at sound check, and works great for most of the show until the two guitar players, who haven’t been speaking to each other for most of the tour, suddenly decide to have a Spinal Tap moment and do that leaning on each other’s backs shtick…which puts their guitar transmitters (belt packs) in close proximity. Suddenly, the singer is tearing out his earbuds, shooting nasty looks at the monitor tech and trying to keep his pitch via the wedge mix (remember those?).

After the show there’s a whole bunch of speculation and shoulder shrugging about where this terrible interference came from, with everyone having their belief that wireless is inherently prone to this sort of thing firmly reinforced. But what can you do?

Each of the three techs choosing frequencies exercised due diligence and scanned for a clear frequencies, right? The real problem is that the frequencies were not properly coordinated, which allowed the guitar packs to create an intermod product that landed right on the singer’s IEM frequency, as well as the frequency of his wireless mic system.

This raises the question: How is frequency coordination different from scanning? Frequency coordination is predictive while scanning is reactive. Scanning can only show you what potential sources of interference are in a given area when you’re looking and when they’re happening. Coordination, on the other hand, predicts sources of interference and offer a selection of frequencies to avoid them.

You’re the stage manager at a sports arena, where a soul diva is about to sing the anthem. On your left hip you’re wearing an RF intercom pack programmed to transmit on 620.000 MHz.

Standing to your left and looking lovely and focused, the diva holds a wireless mic tuned to 610.000 MHz in her right hand, at her side. And she’s wearing an IEM pack on her back tuned to 630.000 MHz.

You reach down, key your belt pack and tell the folks in the control room “I have the package, she’s ready to go.” As you do this, her hand shoots to her ear and a look of alarm passes over her face.

You key your intercom again: “Hold a minute, there’s a problem.” The diva looks at you – there was that noise in her ears again!

I’m sure you get the picture by now. Your intercom Tx and her wireless mic are producing an intermod product that is landing on her IEM frequency – but only when you key your intercom to talk, and possibly, only when she has the mic by her side. You can’t scan for that, but you could have predicted it with a frequency coordination program.

So what does a coordination look like? Well, for starters, it takes a computer program to sort out all of the math. Setting that aside for a moment, a coordination starts with a list of all wireless frequencies to be used. This includes:

As an example, here’s a list for a small TV production with two musical acts, and to add to the challenge, I’ve allocated every channel in the spectrum below 600 MHz to give you an idea what the future holds. 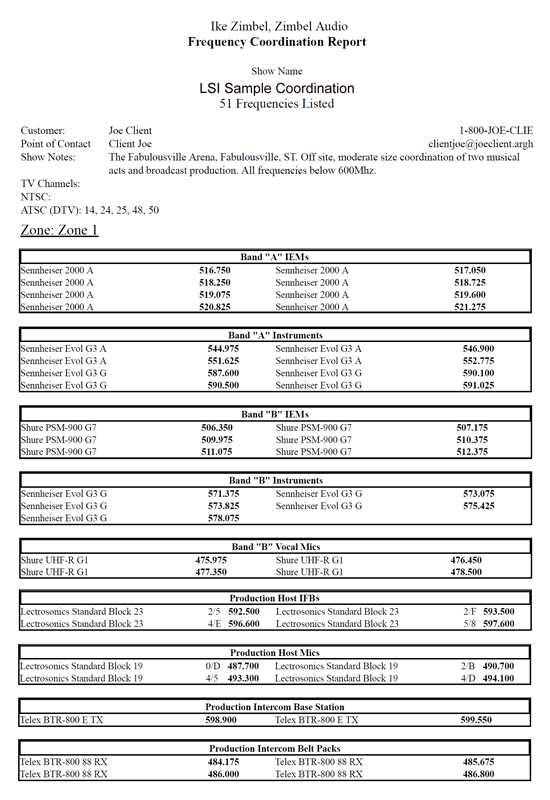 I’ve taken the above list and done a sample coordination to give you an idea of what one looks like (see the frequency coordination chart, at right). I’m sure it will seem incredible to some, but I’d expect to take the 51 frequencies listed in this coordination into that venue and have zero wireless problems over the course of the event.

Ike Zimbel has worked in pro audio for 35-plus years, and during that time he has served as a wireless technician and coordinator, live engineer, studio technician, audio supervisor for TV broadcasts, and has also managed manufacturing and production companies. He runs Zimbel Audio Productions (zimbelaudio.com) in Toronto, specializing in wireless frequency coordination and equipment repair/modifications.