The half-dodec can provide another option to get the room acoustics data needed to properly model the space.

The first step in the sound system design process is the acoustical site survey. For many projects it is important to assess and quantify some key room acoustics measures in advance of loudspeaker selection and placement. This information is used to aid in the generation of a computer room model that can serve as a virtual environment for evaluating possible loudspeaker selections and placements, based on speech intelligibility and music clarity.

Over the years I have been torn regarding the best sound source directivity for room testing. A dodecahedron loudspeaker (or “dodec”) produces the strongest room excitation. In the past I have published some “recipes” for constructing one of these 12-loudspeaker devices – a task not for the faint of heart. If your objective is to generate and measure a reverberant sound field, it’s the traditional favorite. Commercially produced dodecs tend to be expensive, and many cannot justify the investment in this “one trick pony.” 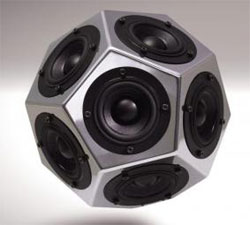 A medium-Q loudspeaker is a second alternative (Photo 2). The frequency response is smoother and the bandwidth greater. It’s more like a sound source that would actually be considered for a sound system design. The downside is that the room is not evenly excited in all of the octave bands. This can result in poor signal-to-noise ratio and an indeterminate reverberation time at high frequencies. The upside is that there are many devices in the market place, including units with on-board signal processing and power amps. 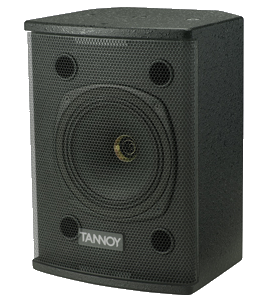 Is there a compromise, a loudspeaker with a fairly smooth axial response that strongly excites the space? Enter the “half-dodec.” With six loudspeakers instead of 12, the radiated wavefront is hemispherical.

The Isobel Baritone is a commercially manufactured half-dodec (Photo 3). While its target market is musical performance, it struck me as being a possible candidate for room testing. I had the opportunity to test drive one for a few weeks this spring, during which time I produced a CLF data file and performed some room measurements in a local gymnasium. 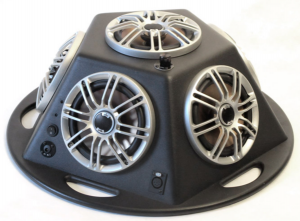 The directivity data was collected as shown in Photo 4. A 19-microphone array was used to measure a half-hemisphere of data. This was mirrored to produce a hemisphere of data points at 5-degree angular resolution. The reference sensitivity is shown in Figure 1. The response is relatively smooth with an average of about 90 dB-SPL/2.83 Vrms/1m. There is sufficient low frequency output to avoid having to supplement it with a sub-woofer in many applications – a very important feature if you are trying to travel light. Figure 2 shows the measured impedance magnitude, which was used to determine a rated impedance of 6.6 ohms. The maximum input voltage, Emax was determined to be 20 Vrms, using the non-destructive “toaster test” described in the link. 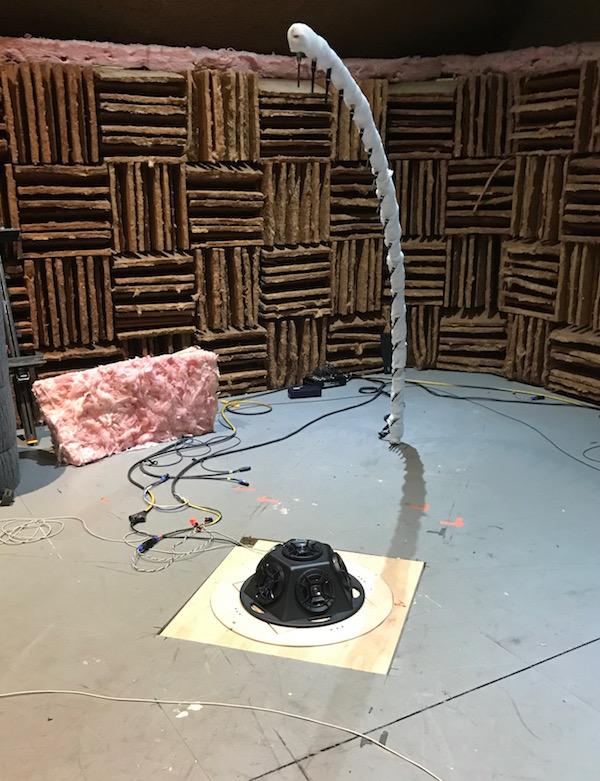 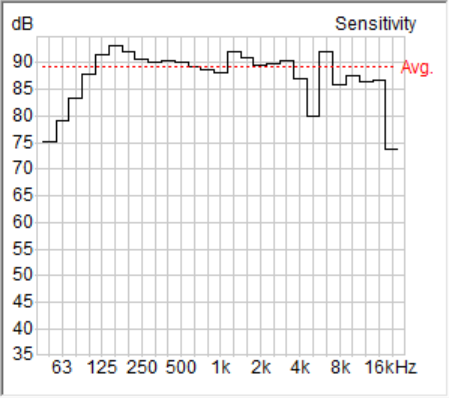 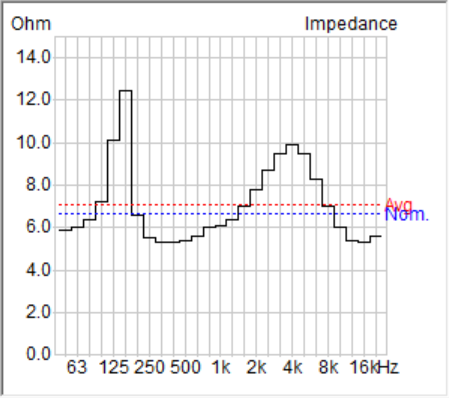 Log sweeps of 14 seconds in length are required for room testing. This requires that the amplifier be able to sustain a sine wave for this duration, into 6.6 ohms. This cannot be determined from a conventional power rating, so I produced a Common Amplifier Format report for an amplifier that I hoped would be suitable for the testing. The MiniDSP Power ICE-150 is a plate amplifier that I built into a stand-alone box that fits nicely into my travel rig (Photo 5). It has on-board DSP that can provide the needed source equalization. But, can it hold a sine wave for 14 seconds? 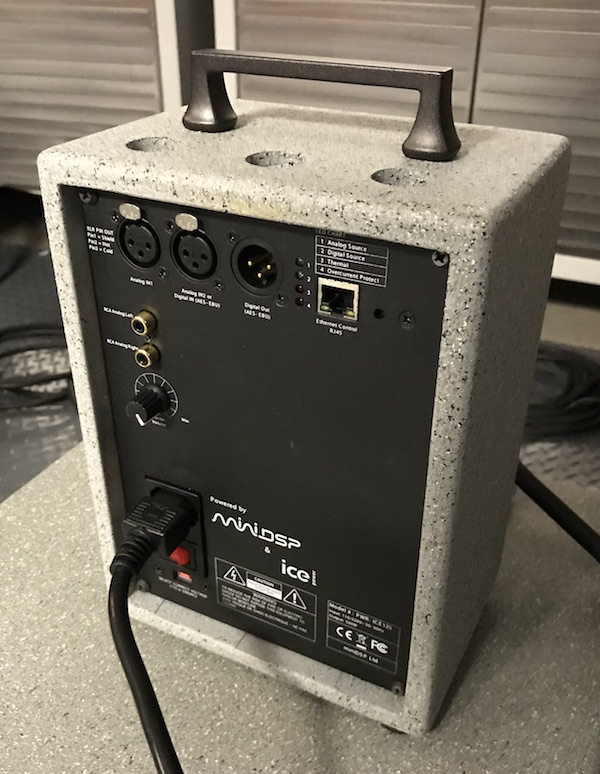 Photo 5 – I built a box to house a MiniDSP PowerICE-150 amplifier. It has balanced inputs and control via Ethernet.

Figure 3 shows the voltage/resistance/power report matrix for the amplifier, as described by the Common Loudspeaker Format. It clearly shows that the ICE-150 can sustain a sine wave for 15 seconds duration into 4 ohms, at both 50 Hz and 1 kHz, so the higher impedance of the Isobel lessens the load and provides a safety margin. 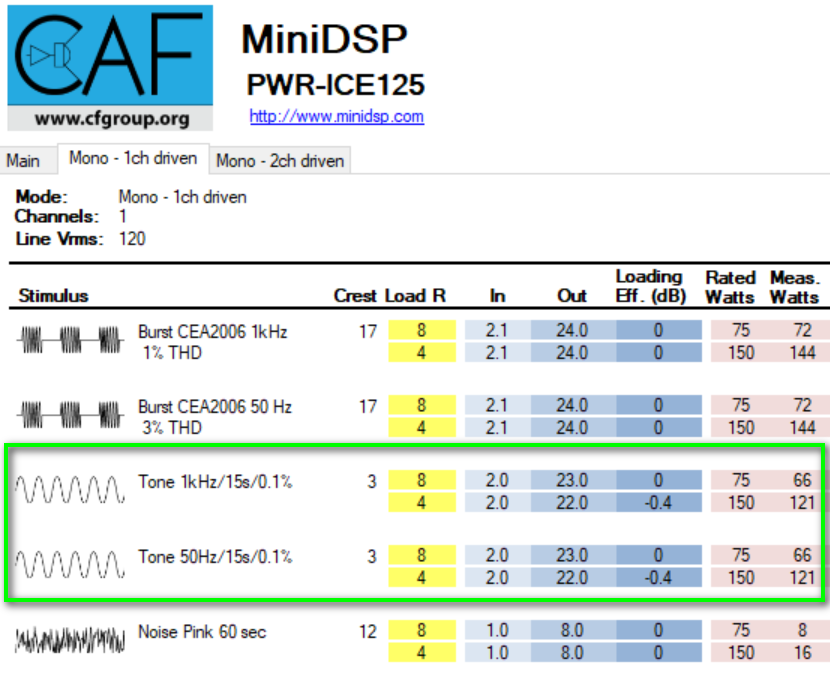 Figure 3 – The amplifier can hold a sine wave for at least 15 seconds. A burst test alone (from which most amplifiers get their ratings) does not provide this information.

I took the loudspeaker/amplifier combination into a local semi-reverberant gymnasium to collect some sweeps at 5, 10, and 20 m (Photos 6,7). The log-squared RIR for 20 m is shown in Figure X, normalized to 0 dBFS. The signal-to-noise ratio provides valid T30 data for all ten octave bands, even though it was collected with the HVAC running. 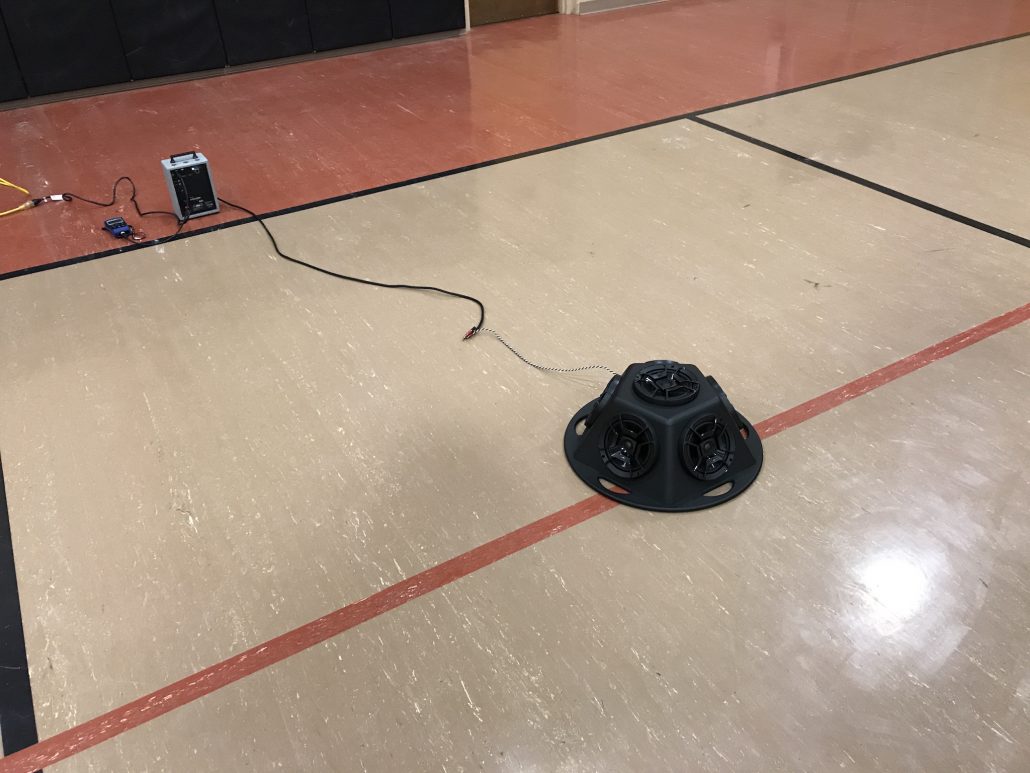 Photo 6 – The amplifier/Isobel combo, driven by an NTI MRPro generator 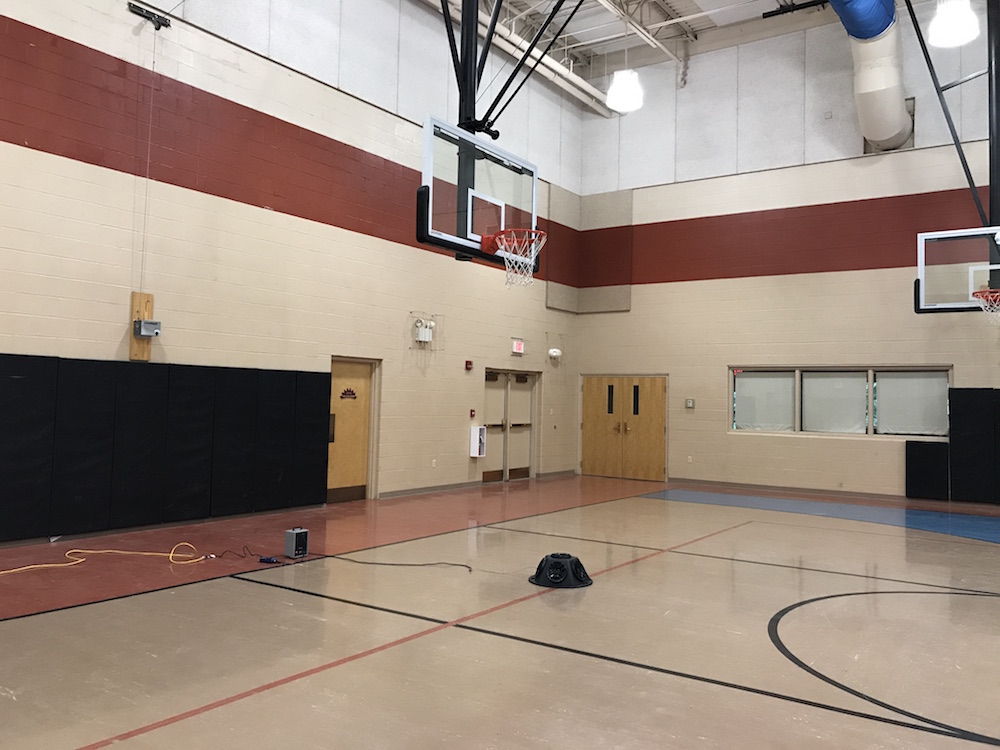 Photo 7 – A typical noisy gymnasium with some acoustic treatment (Tectum) at the tops of the walls. 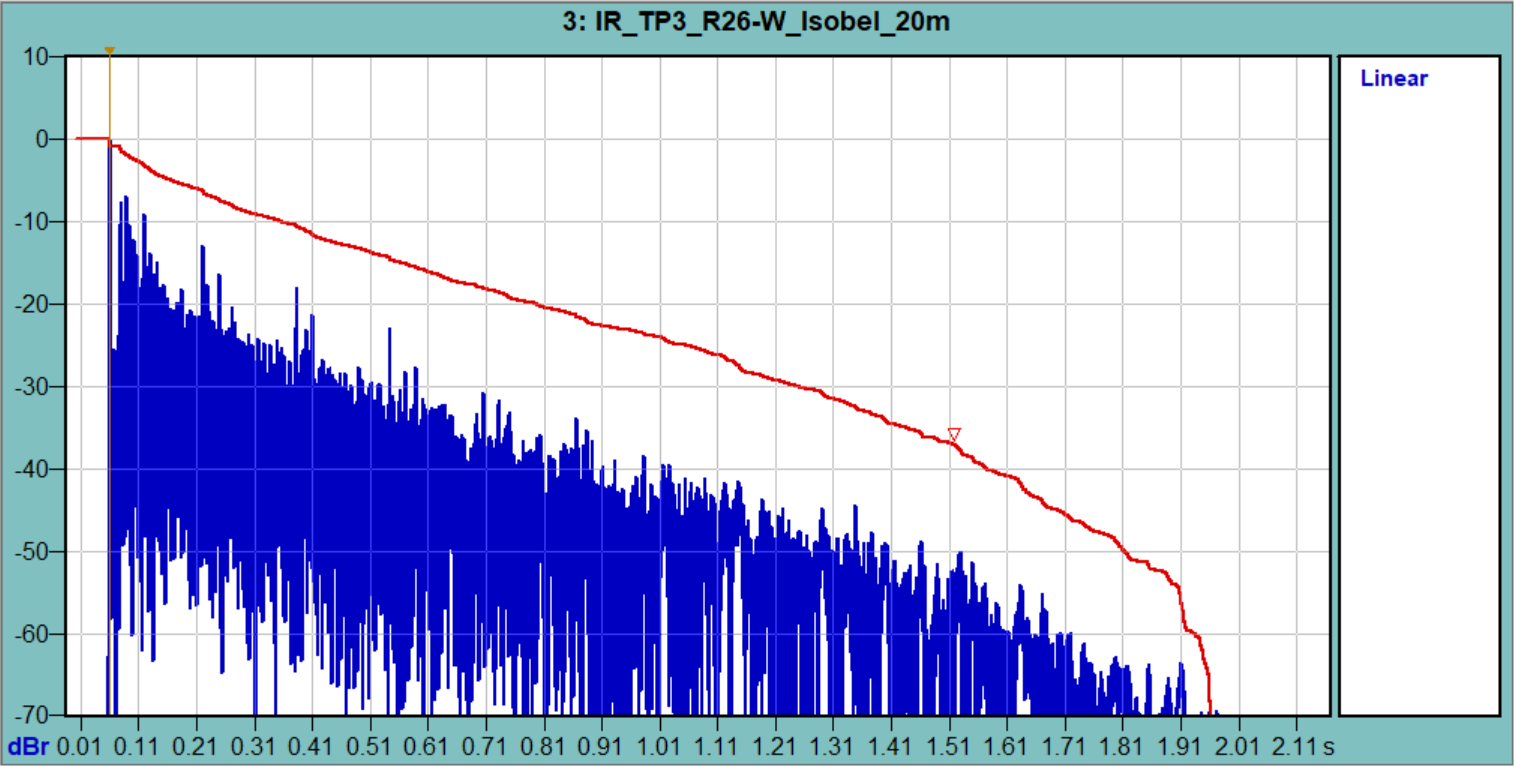 Figure 4 – The log-squared ETC shows excellent signal-to-noise ratio, even at 20 m from the source (courtesy Wave-Capture). 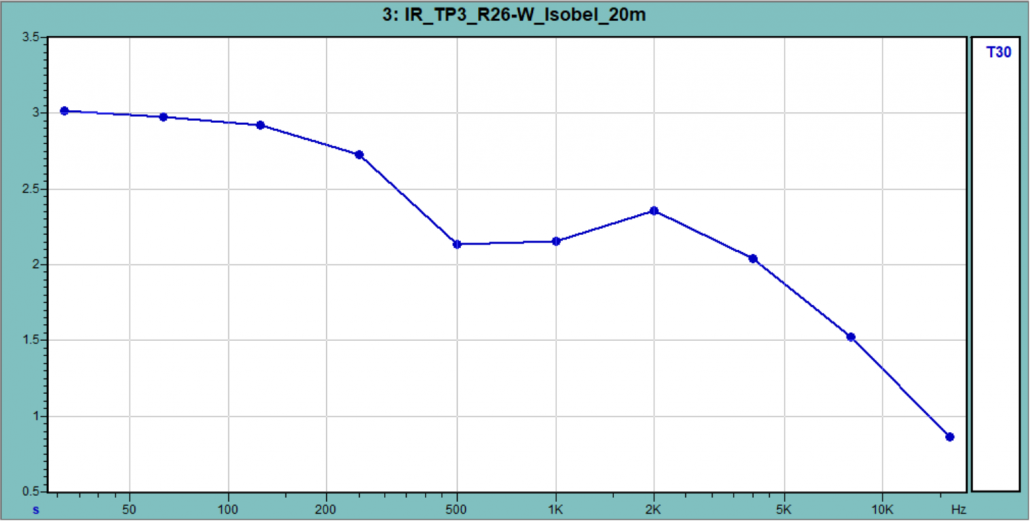 Figure 6 – The predicted RT from the room model (courtesy CATT-A).

The Isobel Baritone has wider bandwidth than most dodec loudspeakers, while maintaining low directivity over its useful operating range. Combined with the Power ICE-150, it can emit approximately 117 dB-SPL into a space (1 m). This should be adequate for most medium-to-large spaces, assuming a reasonable noise floor. It provides yet another way to get the room data needed to properly model the space.

The room impulse response measurements from the gymnasium can be downloaded here.    pb