Pat Brown continues with “Common Amplifier Format (CAF)” series. In this article, he overviews the Crown CTs 2000 amplifier, a workhorse in the commercial sound market.

Crown Audio makes a lot of amplifier models to address the many subfields in the professional audio marketplace. The CTs 2000 (now discontinued) is a workhorse in the commercial sound market. Why review a legacy amplifier? Because there are tons of these still in service, and it has some interesting behaviors that help paint a picture of how modern amplifiers perform and are rated. The unit I tested served at a major sports arena before being replaced by a newer model.

I’ll start this overview with the amplifier’s rated power as given by the manufacturer, shown in Figure 1. A first step in testing an amplifier is to determine what to expect with regard to the output voltage. The maximum power based on a harmonic distortion limit can only be measured with a sine wave since by definition any broadband signal will have a higher crest factor and therefore produce less than the sine wave power. To this end, the CAF includes a 20 Hz – 20 kHz log sine sweep, as well as single frequency 1 kHz and 50 Hz tests.

The CTs 2000 power ratings as published by the manufacturer are shown in Figure 1. I’ve added the expected sine wave RMS output voltage determined by calculation from:

Since the rated power at 8, 4, and 2 ohms is the same (1000 watts), the voltage must drop under load. This is a very general presentation of the amplifier’s performance. The intuitive  deduction is that one gets the same power, regardless of load impedance, which sounds like a good feature if your amplifier philosophy is “all that matters is power.” If you are in the “wave shape preservation” camp, these load-dependent voltage changes can be avoided by keeping the load impedance up toward 8 ohms and/or avoiding very low crest factor program. For an amplifier to preserve the shape of the voltage waveform in lieu of the frequency-dependent impedance variations found in real-world loudspeakers it must have a near zero output impedance and plenty of available current. The CTs 2000 has both if it is not excessively loaded. 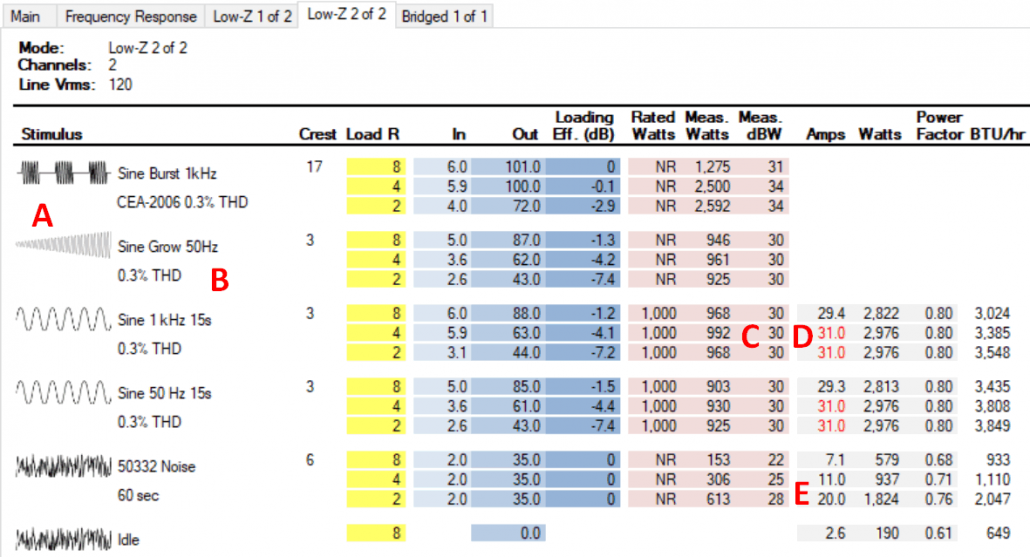 A – The sine grow test was used in lieu of a 50 Hz burst test.
B – The amplifier never reached the 1% THD allowed by the CAF.
C – The measured power of 1000W (+30 dBW) agrees with the rated power for a continuous sine wave.
D – The audio power is limited by the utility power circuit. The CAF turns the amps field red if it equals or exceeds the Maximum Current Draw specification on the Main tab of the CAF report.
E – With pink noise and a 2-ohm load, the CTs 2000 needs a 20 A breaker to reach its rated output.

Amplifiers must draw power from the utility power circuit, which is ultimately converted to audio power. The utility power circuit breaker establishes a limit for current draw. My test bench circuit has a 30 A breaker, and during the tests the CTs 2000 reached this limit, with its internal breaker tripping, and then dutifully resetting after a few seconds. The 30 A circuit was required for the amplifier produced its rated power. It’s a performance limitation that is easy to miss and not spelled out in the owner’s manual. It also explains why the voltage must drop with decreasing load impedance.
The I/O Matrix (Figure 2) shows that the amplifier can operate from a 120V/15 A circuit at 1/8 power (4-ohm load) with both channels driven (11 A current draw). Since amplifier supports 240 V operation I recommend this mode of operation if there is a need to operate both channels at the maximum rated power.

Note that the CAF gives the current draw and BTU output for both continuous sine waves and noise. The system designer can make the decision as to which to use based on the intended application, with the noise ratings as a minimum and the sine ratings as a maximum.

One must apply an input voltage to get an output voltage, and the sensitivity specification states what this voltage must be. The input sensitivity switch is behind a panel and has 3 settings. Crown labels these as per the application rather than giving the actual voltage (8/4 ohm, 26 dB, 70/100 V). I chose to use the “26 dB” setting (the lowest sensitivity choice) and the IO Matrix tabs show the required input voltage to reach the full output voltage for each load condition. For the amplifier to be able to handle the rated maximum input voltage of +20 dBu, the input attenuator must be reduced from “full up” (CAF Main tab).

A burst test finds the maximum output voltage without requiring the amplifier to output a lot of power. I normally use CEA-2006 (car audio roots), as it is well-defined and is an automated test in the Audio Precision (AP) analyzer. If a different burst test is used the specifics can be described in the matrix. The THD never exceeded 0.3%, even with the input overdriven. This is evidence that the amplifier’s compression circuitry is doing its job.

The CTs 2000 was not able to pass this test at 50 Hz, as the distortion was higher than the 1% allowed by the CAF. The 200 ms wavelet (which is 10x longer than the 20 ms wavelet used at 1 kHz) is distorted at any drive level. This is not uncommon, and it is one reason why 50 Hz power ratings are seldom published. When this happens I use the “sine grow” test as a fallback to find the amplifier’s rails. It’s an automated AP test that grows the input voltage until the target distortion is reached (Figure 3).

The IO Matrix for this amplifier illustrates that there is a size limit to modern amplifiers if they are expected to operate as constant voltage sources. In this context, I do not mean constant voltage as in “70 V distribution.” The EE definition of constant voltage in that the “load voltage is independent of the load impedance.” Some modern amplifiers can swing very large voltages but are current limited due to their internal power supply, number of channels, and/or the utility power circuits that feed them. Amplifiers can’t generate power, they can only convert it. The parade route example demonstrates the problem of the amplifier voltage dropping under load. The Loading Effect column of the I/O Matrix shows the voltage drop under various load/signal conditions.
Our industry’s continued emphasis on power ratings obfuscates the fact that very large amplifiers can (and must) be non-linear under some conditions and cannot simply function as “gain blocks.” This (and most) amplifier’s best performance is into loads 8 ohms and higher, which is something I continue to preach if high fidelity is a performance criterion. It’s great that it can “hang in there and take it” when fed low crest factor signals under heavy load conditions, but it is not a recommended practice with regard to fidelity. It’s important that we understand and expect this behavior and not be led to believe that someone has found a workaround. As I showed in a recent article, amplifier efficiency can exceed 80% but it cannot exceed 100% unless power is redefined in different terms than used by other technological fields.
I give Crown credit for not rating the amplifier based on its 1 kHz burst performance into less than 8 ohms (a common practice). That would yield audio power that far exceeds the electrical power drawn from the power grid. The “Low-Z 2 of 2” matrix reveals that such a “power rating” would be nearly 5.6 kW for a 2-ohm load if both channels are summed (another common practice)! One should keep that in mind when shopping for large amplifiers. This amplifier may rival another manufacturer’s “5000 W” amplifier, even though it is rated far lower.

The CEA-2006 burst test is slightly higher than the continuous sine wave tests. The Keele Tone Burst tests show that the voltage of a short wavelet approaches 140 Vpeak. As such, the CTs 2000 has some dynamic headroom above its rated power. The sound system designer can decide which test type best describes their application, and then double-click on the output voltage in the I/O Matrix to load the value into the Low-Z calculator and supply the additional variables needed to make SPL and wire gauge estimates.

The CAF report reveals a lot of information about this amplifier – much more than is provided by Crown (Figure 1). They give the big picture, but leave out some important details. This forces the savvy system designer to “fill in the blanks” with regard to issues such as AC power requirements and optimum loading conditions.
As it turns out, the CTs 2000 is conservatively rated when compared to common industry practices. But how is the user to know that? I strongly suspect that the performance specifics of this amplifier will be markedly different from other large amplifiers with similar “power ratings.” We’ll see how other amplifiers stack up in future articles.  pb
https://www.prosoundtraining.com/wp-content/uploads/2017/11/synaudcon_small-300x57.png 0 0 Pat Brown https://www.prosoundtraining.com/wp-content/uploads/2017/11/synaudcon_small-300x57.png Pat Brown2019-04-30 06:39:062020-03-27 12:22:12Common Amplifier Format: Crown CTs 2000