Ray Rayburn provides an excellent tutorial for good grounding and shield practice in any audio system.

A recent SAC Listserv thread concerned static discharge and its effect on a sound system.
Ray Rayburn recounts a situation that provides an excellent tutorial for good grounding and shield practice in any audio system. I include it here with his permission. pb

I had a project from static hell. It was so bad that someone walking by the microphones a few feet away would crash the CPUs. To make a long story short we did a quick fix, by getting the building engineers to crank up the humidity. Then we did a detailed study of what it would take to _fix_ the problem.

Some engineers wanted to “ground” the equipment better. All sorts of things were tried none of which did anything but change the tuning of the sensitivity to static zaps.

Many sorts of filters were tried, including bypass caps across the lines in and out of the electronics, and large external ferrites. The combination of ferrites and caps helped some but did not cure the problem.

At last I got a senior engineer to support my suggestions and we:

Once these changes were done the system would now withstand zaps an inch from the wiring with a gas grille igniter. Oh by the way, it still made zero difference if the electronics was “grounded” or not, although on general safety principles we left it “grounded”.

This static problem could easily be there forever, or, at best, reappear after various fixes are applied, janitorial staff comes and goes, etc. That is why we wanted a real fix, and did not rely on just higher humidity. rr 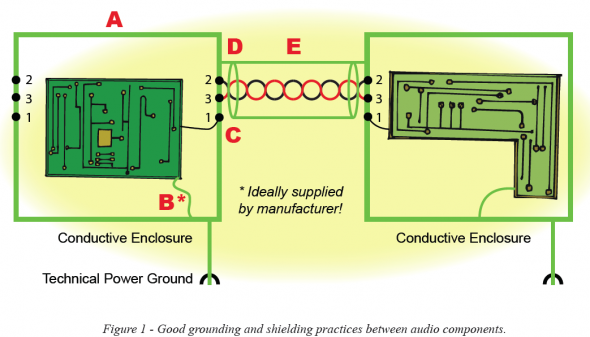 Global Voltage Chart
Product Data Sheets - What should be on product data sheets?
Loudspeaker Power Ratings - Why all the Fuss About Power?
It Ain't Just Dirt... Grounding to Reduce Hum and Buzz - Part 2
Manifold Drivers - How Much Additional SPL is Realized.
Target SPL and Required Amplifier Size