How much additional SPL is realized with manifolded compression drivers? Pat Brown made some measurements and shared the results.

A recent thread on the Syn-Aud-Con email discussion group concerned manifolded compression drivers. How much additional SPL is realized? One theory suggests +6dB, yet another suggests +3dB. I offered to make some measurements to break the impasse. Deward Timothy of Poll Sound was kind enough to ship me the required devices. 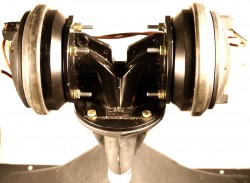 The horn is an EV HP940, and the drivers are the N/ DYM 1mt-16. The measurements were made at 3 meters, with 2.83 vrms driving all configurations. No equalization was applied, and all plots are smoothed at 1/12th-octave. The plots are scaled 6dB/division to be visually relevant to the discussion.

The axial sensitivity and electrical impedance of 3 configurations were measured:

b. Dual-driver with one driver shorted 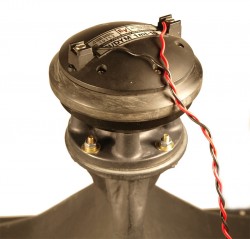 The impedance magnitude of each configuration is overlaid in Figure 1. The rated impedance of each driver is 16 ohms. Impedance data reveals the load as seen by the amplifier, and can help determine what is producing changes in the sensitivity.

In theory the increase could be +6dB since the two drivers are time-coherent and therefore sum in-phase at all frequencies. To investigate this, I first measured both drivers, and then measured a single driver with the second driver shorted. Figure 2 shows the response curves. The sensitivity difference is very close to +6dB

over the entire bandpass of the system, proving that coherent summation does occur in the throat of the horn. 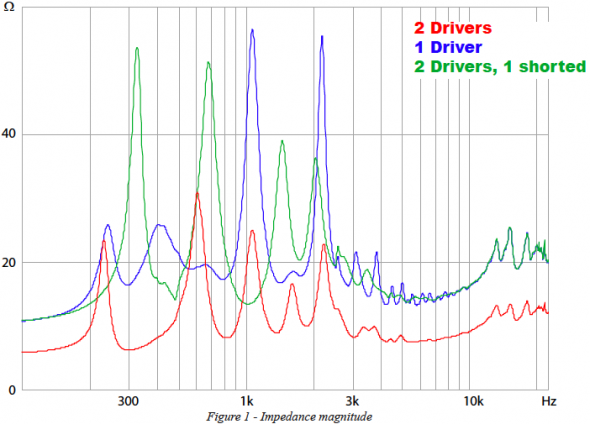 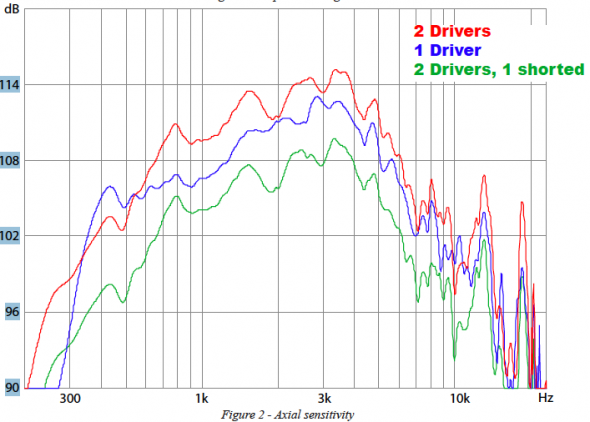 Next, I removed the manifold bracket and replaced it with the single-driver mounting adapter and one of the two drivers. The impedance and sensitivity data of this configuration were collected and overlaid with the previous responses.

Above 4 kHz the impedance was twice the dual-driver impedance (they are connected in parallel). Below 4 kHz there are significant changes to the resonant frequencies caused by the change in the acoustic load on the drivers.

Since the original objective was to compare sensitivities, I overlaid all responses and smoothed at 1-octave steps (Figure 3). This removes some of the variations and makes it possible to home in on a “one number” frequency-dependent answer. Lastly, I computed the log average from 400 Hz to 10 kHz (below) to get that “one number” answer that everyone likes. 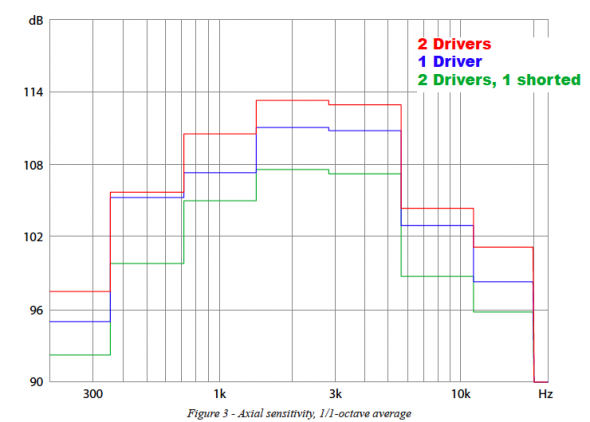 The bottom line is that the manifolded drivers do not produce +6dB relative to a single-driver system. The log average SPL is only about +2dB. There is nothing wrong with the theory, but the single-driver mounting flange produces better acoustic coupling to the horn than the manifold flange. As such, the theoretical expected gain is not realized 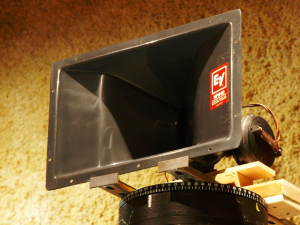 So why use a dual-driver system? There are still some good reasons. When the maximum output level of a system is approached, a 2dB increase in SPL is significant. If the application requires that the single driver be operated near rated power, then adding a second driver is the only way to get higher SPL without adding a second horn and the attendant change in directivity. The dual-driver system can produce the same SPL from a lower drive voltage, reducing thermal strain and increasing reliability. Also, a dual-driver system provides redundancy if one driver fails.

A comparison of these three configurations is apples vs. oranges vs. pears. Each mounting produces a different acoustic load on the driver(s). It is interesting to note that if a dual-driver system is used, and one driver fails, the response is -6dB, but manifolding two drivers onto the same horn does not produce +6dB compared to a single driver system. pb