Loudspeaker power ratings is a confusing topic in the audio industry. In this article, Pat brings some clarity.

It is generally accepted that a large loudspeaker power rating is a sign of quality and something to be desired. It may be the performance metric that has the greatest influence on the consumer’s buying decision. A closer look reveals that it is far less significant than other metrics regarding the performance of the loudspeaker.

The power rating of an amplifier describes its ability to do work on a load – like moving a loudspeaker. Generally, the bigger the better if you want a lot of sound. The power drawn by the transducer varies with frequency, and while the SPL is often referenced to the input power, it more closely resembles the voltage waveform applied to the loudspeaker. This can be seen by plotting the on-axis SPL against both (Figure 1). It is desirable for the loudspeaker to have a flat voltage response, so that equal drive voltage per frequency produces a flat magnitude response on-axis. So it is actually the drive voltage that is of interest, not the power.

The voltage waveform for music or speech is complex and has broad spectral content. The heating value, or equivalent DC value is the RMS (Root Mean Square) voltage. The apparent power drawn by the load is found by multiplying the RMS voltage by the RMS current. The average power is found by multiplying the apparent power by the power factor (often erroneously called “RMS power” on specification sheets). 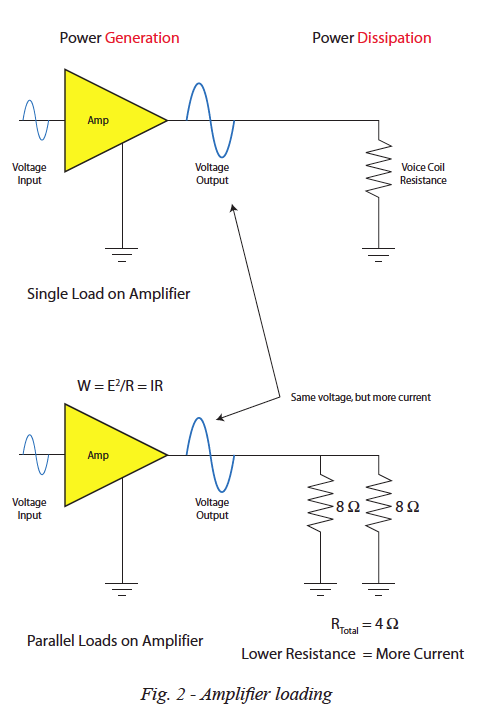 While power ratings are convenient, it still comes down to voltage across a load, not power. Yet it is traditional in the audio industry to reference the output of a loudspeaker to the applied power rather than the applied voltage.

Amplifiers are rated for power generation. Loudspeakers are rated for power dissipation. Loudspeakers are notoriously inefficient devices – they waste almost all of the of the power delivered from the amplifier. Their power rating describes the amount of continuous power that can be dissipated in the form of heat without damage to the loudspeaker. While at first glance it may appear that more power dissipation is better, this is only true if the method used to achieve it does not compromise the efficiency of the loudspeaker.

The ideal loudspeaker can produce the desired sound level using as little power as possible. There is less heating due to the higher efficiency. There is nothing impressive or inherently beneficial to driving lots of power into a loudspeaker. It is more impressive to get lots of sound with less applied power. Think of mileage ratings for automobiles and you have the right idea. It’s more about efficiency than consumption. Horn loading, boundary placements and manifolding are methods of increasing loudspeaker efficiency, allowing more sound per the applied voltage (and ultimately the applied power).

Let’s say that your sound system needs to deliver 100dBSPL to the audience. That’s very loud, so one might assume that they need a loudspeaker with a large power rating to get it. Not so – you need a loudspeaker with high efficiency and sensitivity so that it can produce the desired level without getting too hot. Rather than saying “Wow, the Killsound 5K handles 5000 watts!” it would be better to ask “Why do I have to feed 5000 watts to the Killsound 5K to get 100 dBSPL in the audience? The Efficienator 1 can produce that level and only have to dissipate 100 watts!”

The only reason to “power test” a loudspeaker is to determine its thermal limits. Many methods exist for determining the maximum input power. All of them have merits, and all have similar attributes. A meaningful power test must include:

Figure 3 shows a useful way of plotting the results of the test. The noise stimulus for a power test is usually pink noise (equal energy per 1/n-octaves). Some methods use flat pink noise (as viewed on a 1/N-octave analyzer) and others apply a weighting filter to simulate the spectral content of music. The latter type can produce higher power ratings into full-range devices since more of the electrical energy is shifted toward the lower frequency bands where a transducer can usually dissipate more heat due to its heavier construction. 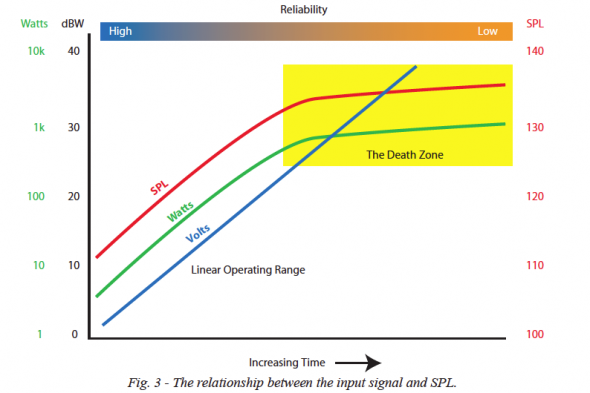 To determine power transfer both the voltage and the current applied to the device-under-test must be monitored. It is not sufficient to calculate the power 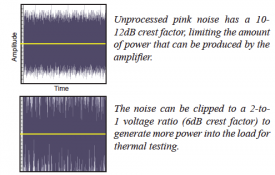 transfer from the applied RMS voltage and the nominal impedance of the load. The reason is that the load impedance will increase when the device-under-test heats up, reducing the power drawn by the load (power compression). The power drawn then ceases to track the applied voltage and the SPL may not increase as the drive voltage is increased. Monitoring voltage and current will yield much more conservative power ratings than are often claimed by promotional materials. The loudspeaker’s impedance should also be monitored during a power test for increases due to heat. If it increases by more than 10% the loudspeaker is getting into trouble and the applied voltage should be reduced.

Our Old Friend the Decibel

It is best to consider power ratings on a decibel (proportional) rating scale. Wattage ratings can be extremely misleading with regard to the performance of a device. Consider the fact that a loudspeaker with a 500 watt continuous power rating can only be driven slightly harder than one with a 250 watt rating (+3dB). This means that there is little practical difference between the two regarding power handling, even though there is an apparent large difference in their ratings. If the 250 watt unit has a +3dB sensitivity rating compared to the 500 watt unit, the former unit could produce the same SPL with one-half of the applied power!

Most power tests modify the pink noise stimulus to have a lower crest factor by clipping the program peaks with an electrical circuit. The practical reason for clipping the waveform is to allow the amplifier to deliver more power to the load. Remember that a power test is all about heat, not about sound. The maximum amplifier output power for unclipped pink noise is about 1/10th of the amplifier’s sine wave rated power. Clipped pink noise can produce about 1/2 of the amplifier’s sine wave power rating, allowing high power testing with reasonable amplifier sizes. The clipping artifacts do not contribute significantly to the heating of the loudspeaker (in spite of sounding bad), but the lower crest factor produces more power (higher RMS voltage) into the load.

A continuous power test feeds 6dB crest factor pink noise to the loudspeaker for a specified period of time (i.e. 2 hours). This is a demanding test for the loudspeaker, since there are no breaks in the program material to allow cooling. Program power ratings attempt to simulate music or speech by reducing the duty cycle of the waveform. If the noise is pulsed, some cooling can occur between bursts and more short term power can be applied prior to thermal failure. Many manufacturers estimate the program power rating by doubling the continuous power rating (+3dB or 2x is a reasonable assumption). The actual recommended amplifier size will be larger than either of these ratings. A reasonable estimate is the continuous power rating +6dB (4x). Given these definitions, a complete and meaningful power rating for a loudspeaker might be:

Once can easily see the problem with comparing loudspeaker power ratings. It takes a lot of research to assure an “apples to apples” comparison, and many specs simply don’t include enough background information to allow this.

Contrary to urban legend, there is no danger to a loudspeaker from feeding it less than its rated power. In fact, it will have a longer, happier life if it runs at a cooler temperature. References to “under-powering” are based on the amplifier having insufficient peak voltage output to pass the signal without clipping – there is plenty of power, but insufficient “peak” room. I recommend limiting the input power to no more than ½ (-3dB) of the continuous rating for reliable operation. In the preceding example this would mean using an 800W amplifier, feeding it typical program material (10-14dB crest factor) and driving it just to the brink of clipping as a maximum. Under these conditions, the amplifier will be producing about 80W continuous or less into the loudspeaker, most of which will be dissipated as heat. Since the amplifier has a potentially large output, care must be taken to assure that low crest factor program material is not turned up too loud as it could damage the loudspeaker.

Finally, it is important to realize when you are reaching the point-of-diminishing-returns when turning up the volume on a sound system. Each 40% increase in applied RMS voltage to the loudspeaker produces twice the input power, and only a slight (+3dB) increase in sound level. Remember that with audio it is the proportional change that matters. As the volume of the system is increased in 3dB steps, eventually the limits of heat dissipation are reached and the next 3dB “breaks the camel’s back.” A loudspeaker is very near its maximum loudness at one-half of its rated power. There is nothing to be gained by going further and the loudspeaker will likely suffer permanent damage.

Advancements in automotive technology have produced vehicles with greater efficiency and lower operating cost due to reduced waste. The audio industry should have a similar goal – achieving the desired SPL using less amplifier power. As efficiencies increase the need to dissipate lots of power should diminish, as should our fascination with high power ratings.

Loudspeaker power ratings have nothing to do with how a loudspeaker sounds. While usually referenced to applied power, the acoustic level is a function of the RMS voltage impressed across the loudspeaker’s terminals by the amplifier, and a voltage reference should be used for specifying the sensitivity of the loudspeaker. The power consumed by the loudspeaker is a byproduct of its resistance, and it must be dissipated in the form of heat. High efficiency is more desirable than high power handling, and there is nothing inherently beneficial in a loudspeaker being able to consume lots of power. As long as end users hold high power ratings in high regard, there will pressure on manufacturers to devise rating methods that produce big numbers, while improvements in loudspeaker efficiency go unheralded.

I would like to recognize Jay Mitchell and Chuck McGregor for their comments on the CLFGroup listserv, which served to shape some of the thoughts presented in this article. pb